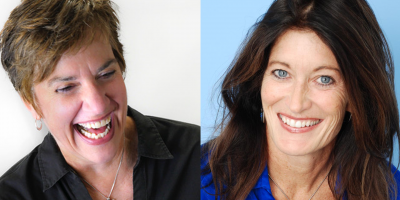 Join Comics Jennie McNulty and Lisa Koch for a Night of Wild Hormones and Laughter!

Comics Jennie McNulty and Lisa Koch (who also sings!) will be back on stage at CAMP for an all new " Wild Hormones" comedy event with shows at 7 and 9 p.m.

Jennie McNulty is “One of the premiere comedians in the country” as proclaimed by The New England Blade. The Examiner called her an, “infectiously energetic, remarkably deft comic with a warm disarming style and some of the best improv skills in the business.” And Curve magazine rates her amongst the “Top 10 lesbian comics.” Her playfully sarcastic style is sure to win you over and most definitely make you laugh.

As for Lisa Koch Daft. Demented. #SNORT. Picture Tina Fey meets Bette Midler with Joan Jett guitar chops... and you’ve got Seattle’s Lisa Koch. An irreverent singer/comedian, out lesbian, and sober chick, Koch (“Coke”) is a deliciously twisted mix of comedy, theater, and tunes. She has recorded 5 solo CD’s, is one-half of loony sketch comedy duo, Dos Fallopia (My Breasts are Out of Control) She's been on LOGO and Olivia Cruises, and brings to the stage her guitar, her wacky songs, and her musings on being a woman… from middle age to mammograms to singing vulvas.

Last time these gals were in town both shows sold out, so get your tickets ASAP for this hilarious night of Wild Hormones comedy, a Fall spectacular brought to you by CAMP Rehoboth and the Women’s FEST Team.

This show is presented in memory of Georgette Krenkel.