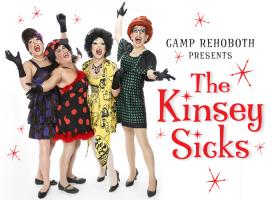 This is the remarkable true story of four friends from San Francisco who had a life-changing epiphany at a Bette Midler concert that led to them to form The Kinsey Sicks in an effort to find joy during the darkest days of the AIDS crisis. Now that the era of Trumpism is upon us, they’re sharing their hilarious, inspiring and at times heartbreaking tale, and showing that hatred and deceit can be fought with humor and heart.

Tickets will be available in April.

Views expressed in the show do not necessarily reflect those of CAMP Rehoboth, the Board, or the staff.