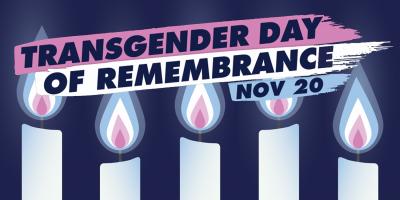 On Saturday November 20th Rehoboth TransLiance in conjunction with Safe Harbor United Church of Christ and the Metropolitan Community Church of Rehoboth will be holding a vigil.  The vigil takes place at 7:00 PM at CAMP Rehoboth.

So far the past year has been marred by 44 brutal deadly acts of violence against transgender people. With plenty more hate left in the year there are likely to be more. The 44 name readers will receive a memorial ornament provided by Salisbury PFLAG. The ornaments will be sanitized and left on the table. The readers will take them home after the reading. Thank you Salisbury PFLAG.

This year will pay special consideration to love and community. The vigil will feature keynote speaker Murray Archibald. Murray is an artist and co-founder (along with longtime CAMP Rehoboth Executive Director, co-founder, and husband Steve Elkins) of CAMP Rehoboth. He has served the organization in many ways since its creation in 1991. From 1993-2018 he was President of the Board of Directors of CAMP Rehoboth. He served as Creative Director, and following Steve’s death, as Editor in Chief of Letters from CAMP Rehoboth, and Executive Director of CAMP Rehoboth. He is co-founder and producer of the annual Sundance Benefit. He is a past President of Sussex County AIDS Council, and has served as Lay Leader of Epworth United Methodist Church. He is currently a member of the Board of Directors of the Rehoboth Beach Historical Society. In 2013 Murray and Steve were awarded the Order of the First State by Governor Jack Markell.

Three young local current and future leaders of our community Mikey Shock, Jazminara Aran and Alex Delise will be honored for their activism, educational outreach and service to community.

After there will be a reading the names of transgender people killed due to anti-transgender hatred or prejudice. This is the fifth TDOR vigil in Rehoboth and we hope to keep it an annual event until the bigotry ends.

This event will also be podcast by Jack Bucchioni at BlueCoastTalk.com