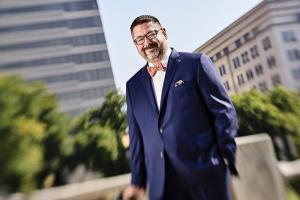 Regulation 225 has failed. This regulation would have provided protection for transgender students. Mark will be talking about what policies may be best for schools in Delaware to protect transgender students. We will also be discussing the recent Supreme Court decision and it’s potential impact on trans people, including in education, and what schools should be doing to ensure trans students are not being discriminated against.He will be telling us about his organization and their efforts to protect the LGBTQ community.

Mark has advocated for LGBTQ civil rights in Delaware for over a decade, including drafting and co-leading the advocacy and educational campaigns for Delaware's civil union, marriage equality and gender identity nondiscrimination acts. In 2016, he was awarded the Order of the First State, Delaware’s highest honor for meritorious service, by Governor Jack Markell in recognition of his service in support of LGBT equality. Also in 2016, he was honored by the Delaware State Bar Association’s LGBT Section for his exceptional commitment to improving the legal services afforded to members of Delaware’s LGBT community and to the advancement of the legal interests of LGBT Delawareans. In 2014, he received the Delaware Distinguished Service Medal from the Adjutant General of the State of Delaware for his pro bono legal service to the Delaware National Guard. In 2012, he received the Delaware State Bar Association President's Award for his advocacy for equality for all Delawareans.

From 2017-2018, Mark served as a member of the Delaware Department of Education’s Development Team to create proposed Regulation 225, which as originally drafted and proposed, would have explicitly prohibited discrimination against students in Delaware schools based on their gender identity or expression.

Mark has successfully worked to protect transgender Delawareans from discrimination in insurance (including private insurance and state insurance coverage for transition related healthcare), to ease restrictions for name-changes and gender marker changes on birth certificates and drivers licenses, to prohibit the practice of conversion therapy on Delaware youth, to modernize assisted reproduction laws for the benefit of LGBTQ Delawareans, and to protect transgender inmates from discrimination in prisons.

Mark has been recognized for excellence in law in Chambers USA, The Best Lawyers in America, Super Lawyers and Delaware Today magazine.