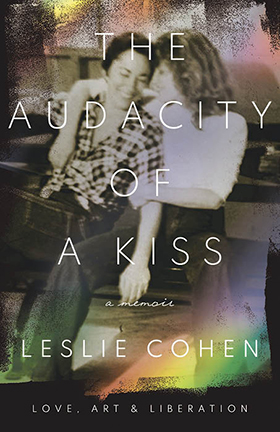 Stay entirely still, don’t even breathe. You’re about to become a symbol of something that’s bigger than you are, something you’ll be proud of for the rest of your days. Don’t flinch, scratch, or sneeze; just don’t do anything. Don’t. Move. Unless it’s to turn the pages of The Audacity of a Kiss by Leslie Cohen.

Behind every statue is a story, and the one behind those representing four people in Christopher Park in New York’s Greenwich Village is no different. But to explain how this monument came about means also telling a long love story and a tale about a nightclub.

Leslie Cohen’s mother was her very best friend, although there were misunderstandings in the relationship. Seven-year-old Leslie couldn’t see why she received pink girly things for her birthday. In later years, she couldn’t understand why her mother deferred to Leslie’s father and endured his abuse.

The one thing Cohen did understand was that once puberty hit, the boys in her neighborhood were no longer pals to roughhouse with. She was supposed to want to date them, and it didn’t entirely make sense, but Cohen went along with it even after she left home for college. She went out with boys and lost her virginity to one, but meeting Beth was the most remarkable thing about higher learning. She was sure she was in love with Beth, but Beth was obsessed with a boy and so Cohen moved on.

She moved on to other men and then women, at a time between when women loving women was unthinkable, and the Summer of Love. Cohen embraced her lesbianism, fell in and out of love, and went into a partnership with three other women to open New York’s first lesbian club, where lesbians and straight feminists were welcome to dance and drink.

To be sure, it was a heady time. Cohen worked nonstop, gained confidence, and learned to run a bar business. She was busy, but happy.

And then Beth came back into her life....

Let’s face it: author Leslie Cohen’s life story is basically like that of a lot of lesbians born at the beginning of the Baby Boom. A solid childhood, confusion, self-awareness, entrepreneurship all make for a somewhat familiar story set apart by one abundant thing: warmth.

Indeed, The Audacity of a Kiss is an easy tale. It’s comfortable, like a crackling fireplace and a glass of wine on a cushy sofa. There are accomplishments here, told so that you really share the pride in them. Readers are shown the struggle that Cohen had, too, but experiences are well-framed by explanations of the times in which they occurred, with nothing overly-dramatic—just the unabashed truth, and more warmth. Opening this book, in a way, then, is like accepting an invitation to own the recliner for an evening, and you won’t want anything else.

Younger lesbians will get a lot from this book, but anyone who’s been there will relish it. Get The Audacity of a Kiss, then sit down...and don’t move. ▼

Terri Schlichenmeyer has been reading since she was three years old and never goes anywhere without a book.