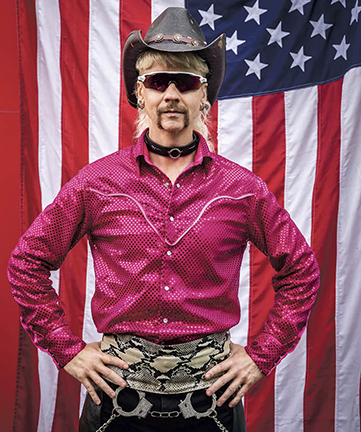 Power and the Tiger King

And so, the Farrah Fawcett wig comes off the 58-year-old actor who created Hedwig and brought her Off-Broadway in 1998, before Hedwig and the Angry Inch became a cult indie film three years later, in 2001. Instead, to portray the wildly controversial and buzzy gay subject of the Netflix docuseries Tiger King for the new Peacock series Joe vs. Carole, Mitchell’s rocking a “Bring Me Some Water”-era Melissa Etheridge mullet.

In this eight-episode dramatization of Exotic’s ludicrous run as the Oklahoma zookeeper infamous for his plot to kill animal rights activist Carole Baskin (played here by Kate McKinnon), Mitchell slips out of Hedwig’s heels and into Joe’s cowboy boots. (Exotic is currently serving a 21-year prison sentence for hiring two men to kill Baskin.) The purely scandalous story told in the Netflix series is still scandalous—how could it not be?—but with a humanizing bent to it. You might even find yourself liking the guy.

From his apartment in New York, Mitchell, who recently came out as non-binary, spoke about his role as Joe Exotic.

Chris Azzopardi: I’ve followed your career for a long time, and being this indie art guy, a lead role in a Peacock series must feel like a big moment.

John Cameron Mitchell: I’m old enough to know that it comes and goes. I was able to buy a house for the first time. I’ve always kept my overhead low. And I was like, well, I’m getting older. And so this came along and it was a dream job. I loved everybody. I had a great time. They took my input. Kate’s amazing. Etan [Frankel], the showrunner, is amazing. And we shot in Australia, which was very fun and comfortable at the time. I had more fun acting in this on screen than in Hedwig because I had too much responsibility in Hedwig.

CA: Wait, so Joe vs. Carole allowed you to buy the house?

JCM: Yes. It’s called money, baby. It’s a mainstream thing. I’m considering another job right now, whether I want to commit to a multiyear thing, but we’ll see. Nice to have options. I’m working on another fictional podcast, which is very fun. This one’s more zany and of-the-moment. And I’m also working on a TV series. Pitching a musical TV series. And continuing touring here and there with my concerts.

CA: With Joe vs. Carole, I think it’s important to acknowledge that you and Kate, two queer icons, are at the center of this story. There’s something very special about that for me.

JCM: I wish we had more to do because we really hit it off and I’m writing her something now I hope she’ll do. Kate and I both obviously have strong opinions about our characters and about humor and about how the characters should be played. Because we’re not really doing the real people; we’re doing an interpretation of them. She’s much funnier than the real Carole. I’m adding my own things to it. It’s maybe 50 percent the real people and 50 percent what we’re bringing to it.

CA: Did you recognize that the series’ queerness would extend to its direction, as well, before you signed on?

JCM: I didn’t really know about the way it was shooting. Justin Tipping, one of the directors, came up with the way it’s shot. It has certain homages to the Coen brothers, to Danny Boyle, to Hedwig even. It’s highly artificial until it gets real. And that’s how their lives seem. They’re sui generis people. They came from trauma, but they triumphed and created their own kingdoms. But then got corrupted by that power, I think. Joe and Carole could have been buddies. Kate and I even had an improv where we just started making out in a dream sequence. It was improvised. They didn’t keep it in and they won’t let me put it on my Instagram because a lesbian’s kissing a gay man and that’s wrong. Seems right to me.

CA: Seems very right to me.

JCM: Yes. Well, I’ll just have to make it happen in another project.

CA: The one that you’re writing for Kate?

JCM: That’s for a podcast. We’ll still kiss on the podcast.

CA: I was thinking about the physicality of Joe, because there’s a lot going on here. And none of it is really you. And that includes the wig, the facial hair, of which you have none, the jewelry, the tats and the shiny tiger print shirts. What piece really helped you transform into Joe?

JCM: A cowboy boot with a heel gives you something, a way of walking. All of it together felt like drag, felt like armor. So when I get into the wig and the makeup and the costumes, it’s the same as Hedwig. And in fact, the characters have a lot in common. They’re both misfits who create their own world to survive it and lash out at people because of their early trauma. Lord over people. Hedwig breaks that cycle. Joe doesn’t.

Chris Azzopardi is the Editorial Director of Pride Source Media Group and Q Syndicate, the national LGBTQ+ wire service. His work has appeared in the New York Times, Vanity Fair, GQ, and Billboard. Reach him via Twitter @chrisazzopardi.