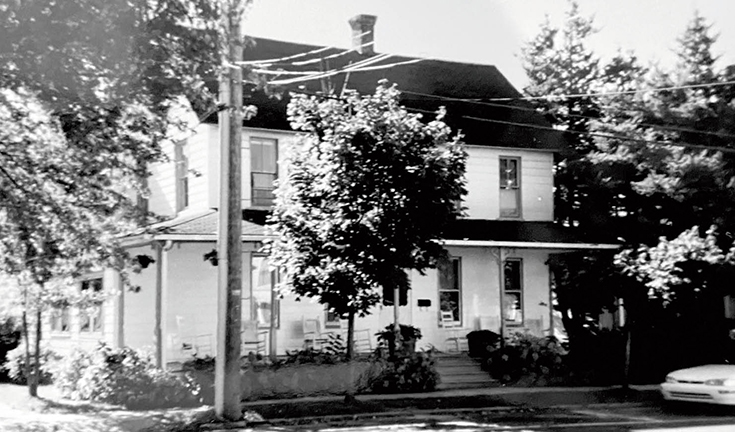 When Herbert Koeber bought the property on 40 Maryland Avenue, it had been operating as an inn since 1915. Although he liked the idea of his new property remaining an inn, he wanted it to be so much more. He wanted it to be an alluring destination. But not just for anyone: he wanted this place to be just for gay men.

What did gay guys want more than anything else in 1979? They just wanted a safe place to be gay. They wanted to make friends, make connections, and meet other like-minded men. For many, this was something that happened only in their dreams.

But by the latter half of the 1970s, things were loosening up. The Vietnam War finally ended, and the hippy era was just about at its peak. Free-lovin’ people were “in,” and people in general had grown tired of fighting. New and more free-thinking types of people were becoming more numerous, and things were starting to look up for a man who knew he was gay.

More people than ever before began to question their religious beliefs, allowing them to more easily question right and wrong. For all these reasons—and perhaps more—Herbert felt this was the right time to create his paradise.

The inn had 14 rooms when Herbert purchased it, but he soon doubled it to 28 to accommodate as many friends as he could. He wanted It to be fun and outfitted to provide entertainment. He also wanted people to be able to relax, to enjoy the beach, and rest. His guests’ comfort was a top priority.

Comfort didn’t come in the form of a fancy mattress or a fluffy pillow. Rather, it was provided by safety. He wished only for his guests to be themselves and to have the opportunity to experience just a small part of his utopia. He named this special place Paradise—Paradise Guest House, to be exact.

Many men who visited Paradise were having their first-ever gay experience. That was because the norm during this time—in a place like Rehoboth—was to keep “gay” hidden deeply away. For a gay man to meet others and make friends, he had to know someone already involved in the scene who could guide him to spots where he could mingle safely with others.

House parties were a common example. Gay men couldn’t just date and see how things went; it was way more complicated and accelerated. Most had alternate lives they could preserve only by staying hidden in the closet. Gay men who didn’t already know other gay men were left with few options—often, ones that placed them at high risk of being outed. Just being seen walking into a gay bar could ruin a man’s life.

Thus, Herbert’s Paradise Guest House was a real game-changer. Men who didn’t know anyone else like them, but who wanted to satisfy their inner queer desires, finally had a safe place to gather. From the outside, Paradise looked just like dozens of other inns and boarding houses in the area. However, inside was completely custom designed to offer a one-of-a-kind gay experience. In a single stay, a man could meet, date, fornicate, and say goodbye forever—that latter, because the minute he left Paradise, it was back to his life as a straight man.

In the late 70s HIV/AIDs was not a thing yet. No one had a clue of the dangers that were beginning to brew. Herbert opened his Paradise and word spread fast. It was an instant success and became wildly popular. He put an ad in the Washington Blade only twice that I can find: one time when he opened it, and once more, when he put the property up for sale.

Yet thousands of people would come and stay in Paradise. So many, that he was always coming up with creative new places he could house a paying customer—like the attic, or in a tent pitched for $5.00 in the backyard. He was even known to kick employees out of their own beds to make room for more guests.

Next installment: a detailed tour through Herbert’s Paradise; readers will get to see for themselves what a truly incredible place it was. Following: some super cool stuff that you likely had no idea happened here! Of course, all good stories have an adversary—so soon, I am also going to introduce you to The Bertha…. ▼