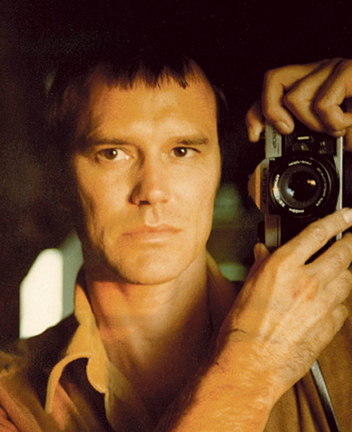 In the early 1980s, Tom Wilson and his beloved mother visited Rehoboth’s Back Porch Café. After thoroughly enjoying their meal, Tom asked Keith Fitzgerald, the co-owner, if he could meet the person responsible for their sumptuous meal. “The rest,” says Fitzgerald, “is history.” Tom and Leo Medisch, the chef, quickly fell in love and remained a couple until Tom’s death.

Prior to that meeting, Wilson had enjoyed great success as a fashion model. He had been photographed by Francesco Scavullo and appeared in the pages of Vogue and Cosmopolitan. He partied with Andy Warhol in New York and posed in Europe and Africa. But he always had a plan: to save enough money to return home and create art.

“Both men were charismatic in their own inimitable ways,” says Fitzgerald, “but what a casual observer might not know was how passionate they were about what they did, and how compassionate they were to others.” They were both artists, he explains. “Leo’s passion was in the culinary arts and he loved to create new dishes and loved to eat. Tom’s passion for art is obvious from the amazing body of work he left us.”

Wilson was a prolific painter whose work still hangs in private homes throughout Sussex County. His work was shown once each summer at the Back Porch Café in exchange for curating the art displayed there the rest of the year between 1983 and 1994.

But now, art lovers can see much of Tom Wilson’s work in one place. Nearly 30 years after his death, his work is being showcased in a solo exhibition (Tom Wilson: Super-Realist/Surrealist) at the Biggs Museum of American Art in Dover. The exhibition is on display now through October 16. Strategic partners in support of the exhibit include CAMP Rehoboth, Bad Hair Day?, and the Back Porch Café.

“Bringing attention to artists who contributed significantly to Delaware’s arts and culture legacy, such as Tom Wilson’s, is why we are here,” says Michael Dudich, Director of the Biggs Museum. “It’s been a privilege sharing his work with the state’s diverse communities. It was recognition well-earned but too long delayed.” 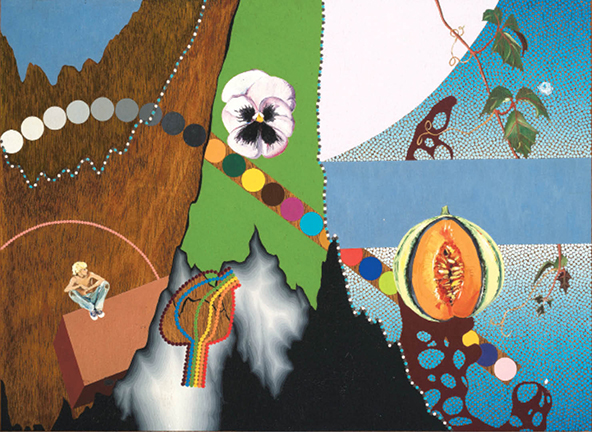 Wilson’s work is very much a product of lower Delaware and features the cottage-style homes found in Rehoboth and Lewes, portraits of the diverse citizens of Sussex County, and even animals like horses, cattle, hogs, and wildlife that are becoming rarer in the 21st century. The work itself is often bright and bold. Comparisons to Edward Hopper are ubiquitous, but Wilson had a style all his own.

Biggs curator Laura Fravel says, “Both Wilson and Hopper depicted older homes in coastal towns. They both explored dramatic effects of light and shadow and had a sense of intriguing, psychological tension in their work.” But as she explains, Wilson’s unique background makes him different. “Wilson also lived as an artist and fashion model in New York City as photorealism was coming into vogue.” She also believes that his identity as a gay man impacted his work. “Many of the leading artists using photography and other forms of image reproduction in their work were also queer, including Robert Rauschenberg, Andy Warhol, and Richard Estes.”

Keith Fitzgerald, who later became a close friend, also notes that Sussex County was a big influence. “[Tom had an] uncanny ability to capture the special light we often enjoy in Sussex County, especially in spring and fall,” he says. “He loved that light and spoke of it often as an inspiration for certain paintings. I have lived here for 50 years, and I agree. A bright, clear day in Sussex is probably as beautiful as anywhere on the planet.”

Peggy Raley, owner of the Nassau Valley Vineyards and another dear friend of the late artist, resists categorizing her mentor or his work. “Tom, himself, would have told you that simply, he was an artist,” she says. “His art had constant imagination. Imagination has no definitions or pigeonholes. When you look at a Tom Wilson painting, you want to go there.”

The exhibition also contains many of Wilson’s later works, which diverge from the hyper-realism of his oil paintings. He created these after he was diagnosed with AIDS. “His work at that time began to express the brevity of life coming at him,” Raley says. “Oil paintings took too much time. He began using pastels again. He had a fabulously whimsical period of doing pastels in his garden.” She notes much of the work of this period is a bit darker in tone and subject matter, but that every piece contains some imagery connected to a path. “He knew he was going somewhere,” she says. 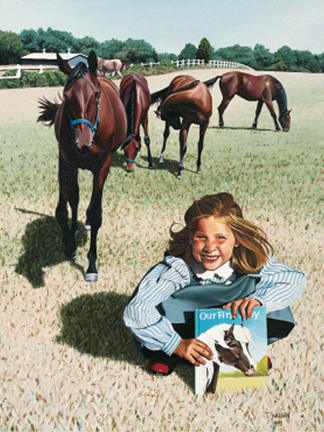 Tom Wilson died from complications of AIDS on Memorial Day Weekend, 1995. For many of his friends, who hadn’t known very many gay men and had never met anyone with HIV, the loss was heartbreaking, but also had the effect of making the abstract and political very real and personal. After his partner’s passing, Leo was quoted as saying, “I don’t want to be alone. But when you’ve had the love that I’ve had, everything else pales by comparison.” Leo Medisch died in 2013 after battling lung cancer.

For many of the 22 lenders who sent Tom’s pieces to the Biggs Museum for the three-and-a-half-month exhibit, it was a way not only to share his work, but to remember the man they knew and loved. “He was the most charismatic artist and human being I’ve ever known,” says Keith Fitzgerald. “Our six originals are our pride and joy but seeing them curated with the other 44 pieces is…gob-smacking. He and [Leo] would be so touched at the outpouring of love for his work, and them as a couple.”

“Tom was explosively alive all the time,” says Peggy Raley. “He had many dear friends, and I am humble and grateful that I was among them.” Asked what she’d like to say to anyone experiencing his work for the first time, she says, “Let it speak to you. If you listen to all the other definitions of what you think you are supposed to see, you might be disappointed. There was absolutely zero about Tom Wilson that was disappointing.”

But soon after, she adds some additional counsel. “Continue to follow this story. Learn about Tom and Leo. Believe in the power of love; that’s their story. Understand how hard people fought who came before you, so that their hard work means something.”

To make it easier for people to experience the exhibition, CAMP Rehoboth, Bad Hair Day?, Nassau Valley Vineyards, and the Back Porch Café are all offering complimentary guest passes to the Biggs Museum of American Art for the duration of the exhibit. While at the Back Porch, guests can order a “Wilson,” a variation on Tom’s favorite cocktail, the classic Manhattan. New and old fans of his work can continue to learn about Tom by watching a festival screener for the film, The Luminous Life of Tom Wilson, on YouTube, and by visiting the Back Porch Café on September 7 to celebrate the debut of a book on Tom Wilson’s life and work with authors Ryan Grover and Laura Fravel.

A visit to the Biggs Museum in Dover between now and October 16 will not only be a feast for the eyes, but an important history lesson. Too many of our stories, particularly those of the people in our community who perished during the worst of the AIDS epidemic, have been lost. But Tom Wilson was a man so charismatic, so talented, and so giving that his legacy simply will not die. The Biggs Museum of American Art is open Wednesday through Sunday from 11:00 a.m. to 4:00 p.m. ▼