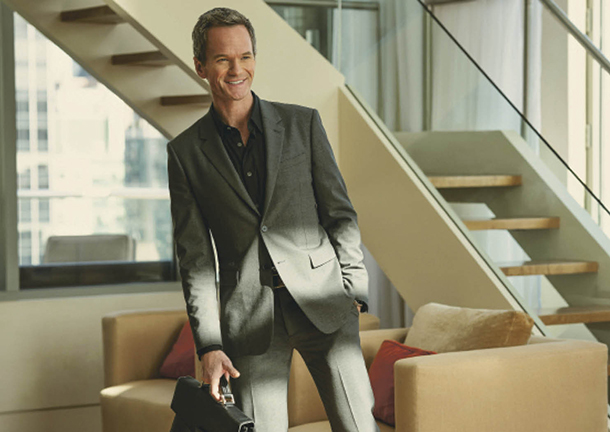 When Neil Patrick Harris shot a scene for the new Netflix series Uncoupled, in which his character tries to snap just the right Grindr shots, it was a little…hairy.

It was “taking angles” and “making sure that you didn’t show your stuff in certain positions” that Harris says was “interesting.”

“We had to find what my ‘d actually looks like,’” said the actor, throwing up air quotes while on Zoom to promote the series.

In Uncoupled, Harris’s Michael, a married Manhattanite, has the rug pulled out from under him when his husband of 17 years, portrayed by Tuc Watkins (Desperate Housewives, Boys in the Band), suddenly decides to end things. Michael quickly learns that, for a single gay man in his mid-40s living in New York City, he’s a little behind the times when it comes to contemporary queer culture. Openly gay TV rom-com mogul Darren Star, who created Sex and the City and Younger, helmed Uncoupled with Jeffrey Richman, so naturally there’s a fair amount of gay sex.

But, as Michael learns, in order to get some taps, you’ve gotta show the goods on social media. Harris’s bare bottom is prominently featured during the episode, though it was the front of his body that resulted in heated discussions and debates.

“My modesty’s fine; I wasn’t that nervous about that,” he admitted. “You have this weird contraption around your actual genitals so no one can see it, but I didn’t want Netflix execs or the editors to see this, like, weird pouch thing, and the camera couldn’t see that either.”

In other words, situating a penis just right is a complicated affair on set. So complicated that, when he went to his trailer the day of the shoot and found “two flaccid rubber phalluses on my desk,” it was time to get the producers involved.

“They were like small and weird, and I think something people used to pack themselves, like drag kings, but it didn’t look very flattering and I sort of said, ‘I don’t want this! I don’t want you to take a picture of this!’”
Specifically—because who wouldn’t want every single last detail?—Harris described the phalluses as “latex, pale, single-colored thing[s].”

And if you ever wondered what it’s like to work on a set of a show in which the penis of your character is up for debate, wonder no more: “We had a nice text thread with the producers,” he recalled. ‘What about this photo if we crop it? And what about this?’ It was the filthiest thing of all. ‘Too big, too thick, too long.’ I was like, ‘Come on!’ But we kind of met in the middle.”

As for the new-and-improved, NPH-approved pics? Still on his phone, he says. Though not for long because his two kids with Michigan-born husband David Burtka, Harper and Gideon, could possibly see them when they go through his phone.

“I really do need to erase those pictures off my phone,” he said.

In other Neil Patrick Harris penis news: He had you fooled in Gone Girl, and contrary to popular belief, what you saw down there wasn’t the real thing.

“We’re at the New York Film Fest, and we’re about to do the red carpet, and [director] David Fincher, when we’re all saying hello, turns to me and goes ‘Oh, by the way: We added a digital dick to your thing so just so you know, it’s not yours. It’s digital.’ I was like, ‘Is it nice?’”

Harris knows that, perhaps, you were misled: “I think people think they might have actually seen my dong on Gone Girl, but that was a digital dong.”

On behalf of NPH, sorry for the confusion. ▼

Chris Azzopardi is the editor of Q Syndicate, the LGBTQ wire service. His work has appeared in the New York Times, Vanity Fair, GQ, and Billboard. Reach him via Twitter @chrisazzopardi.