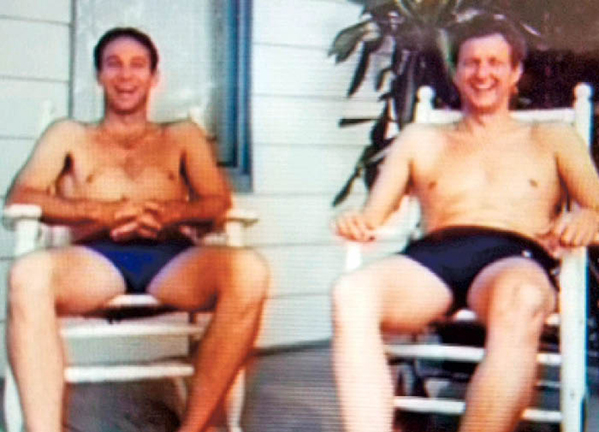 A New Chapter with Bill and Bob

In 1987, Steve Elkins and Murray Archibald, along with their friends, were getting ready to open the hottest new entertainment/dance club in town, The Strand. On just the next street over, another gay business, in fact the first in Rehoboth, was listed for sale. The Paradise Guest House (PGH) was forced to close, as the owner, employees, and many who had frequented it were ill and dying from the HIV/AIDs pandemic.

In Washington, DC, Bob Jerome and Bill Courville were flipping through the Washington Blade when they came across a property listed for sale in Rehoboth Beach, Delaware. They decided to go check it out and drove off together to Rehoboth Beach.

It was not love at first sight. Of their first impressions of 40 Maryland Avenue (aka Paradise Guest House) in 1987, says Bill, “So, we drove there, and we saw it. It was pretty awful. It was the middle of winter.... It was bleak.”

The guest house was in bad shape. Makeshift construction seemed to be all over and unfinished, and the previous owner seemed to them to have left in a hurry, leaving everything in place, untouched.

Bill and Bob had very different backgrounds and personalities than our dear friend (and PGH owner) Herbert. But they had recently decided that they wanted to own/run a guest house. Bill, from Louisiana, had worked at a 13-room hotel called the Maison DeVille when he was a young man in New Orleans. He was very impressed by the exclusive and fabulous lifestyle, and he had envisioned himself one day having his own inn.

Bill was born in Opelousas, Louisiana. His accomplishments included: a PhD in psychology; he’d worked as a therapist and an executive coach. He’d also worked for the mayor of Washington, DC as special assistant for international development, and had been an HR director for a New England health care company. He’d worked for a Saudi prince when he lived in the Middle East for several years, spent a year hitchhiking through Europe, and spent a couple of years in Paris where he worked for a French baroness and learned to tap dance. (Bob says Bill left a lot out.…)

Bob Jerome was born in Minneapolis and moved to Whittier, California, at the age of three. He went to Pomona College in Claremont, California, then went to Tunisia in North Africa and studied French and Arabic. He did a masters at Tufts/Harvard and then his PhD at the University of Geneva. With a degree in international relations, he moved to Washington, DC and got a job working for a number of senators. After that he worked for a UN support group, then a job with the US Department of Commerce in International Trade Administration, followed by a position with a financial management company. He also wrote two books and taught in several places around the world, including the Philippines, Tunisia, and Geneva.

When Bob was in Geneva, he was married to a woman...but it didn’t work out. Bob explains how difficult his internal battle was: “I was kind of confused sexually; when I came back to the States, I dated some women and dabbled with some men. I really hadn’t decided.... The whole AIDs issue was another reason to stay away from the gayness...it was a complicated time. I was not comfortable with the gay issue early on. It took me a while to grow into it.”

Bill and Bob were very unsure about buying the Paradise Guest House, and they reached out to a a good friend who knew Rehoboth well. They told her they had found a 28-room inn for sale, but it was in terrible condition. She asked the location. When they told her Rehoboth Beach, downtown and one block from the beach, she said, “BUY IT!!!!”

While they worked on purchasing PGH, the property behind the guest house—an old bowling alley, skating rink, and movie theater—was getting an overhaul. The building would soon become The Strand, a gay disco. Steve and Murray had filed the paperwork with the city and big planning was underway.

The Berthas were on high alert. They had had enough of all the gay development in their town, and The Strand was just a few lots down from Bertha Pusey’s home. She intended to stop it. And also had plans of her own she was working on…. ▼

Tom Kelch is the innkeeper and property manager of the Rehoboth Guest House. He is excited to write this series for Letters and thrilled to share these stories with Letters’ readers.