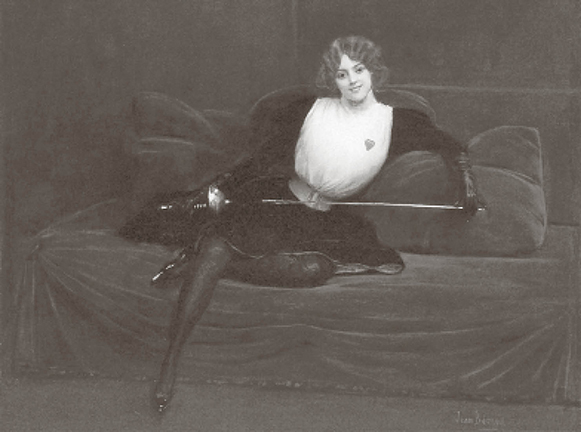 Some people have a natural talent for making mayhem and enjoying every minute of it. Such a woman was Julie d’Aubigny.

Born in Paris, possibly in 1670 or 1673, into a family of wealth and privilege, Julie grew up in close proximity to the royal household of King Louis XIV. Her father, Gaston d’Aubigny, was the Grand Squire of France, a position responsible for training the royal pages and for overseeing the royal stables. In addition to his excellence as a horseman, Julie’s father was an expert swordsman. Gaston d’Aubigny was, to all accounts, a “man’s man,” fond of the manly arts of fencing and fistfights.

Contrary to the typical education of young women, Gaston not only educated his daughter in various academics—usually reserved for boys—but also in the martial skills of swordsmanship, fist fighting, and the art of gambling. Julie excelled at all of it, especially sword fighting, and by age 12 she was a highly competent swordswoman.

She was also an attractive and lusty young woman. At age 16, she embarked on an affair with her father’s immediate superior in the royal household, the Comte d’Armagnac. Even by French standards of the day of royal intrigues and romantic liaisons, Julie’s behavior and the Comte’s passionate response were scandalous. To tone down the gossip, the Comte arranged to have Julie married off at age 17 to a clerk, Jean de Maupin. Despite these nuptials, Julie spent little time―and soon no time at all―with de Maupin and continued her affair with the Comte.

Soon, though, even this proved too humdrum for the adventurous Julie. She ran away with a fencing master named Séranne. The couple gave fencing demonstrations at local fairs and taverns to earn a living. In time, Julie, accustomed to the more privileged life of royal adjacency, cooled on the affair.

Other affairs followed with men and women, as did challenges to her skill with a sword. She bested all comers, wounding and even killing men who dared challenge her. It is said that over the course of her life, Julie d’Aubigny killed or wounded at least 10 men, though the number may perhaps be higher.

Of Julie’s affairs with women, perhaps her most notorious was with a merchant’s daughter, Cécilia Bortigali. Cécilia’s father was, of course, outraged, and to avoid scandal he packed his daughter off to a convent.

Julie, undeterred by the restricted accessibility to her lover, came up with a scheme which has put her into the history books as one of the most daring lovers of all time. In order to get into the convent, Julie hastily took up religious orders, granting her entry into the convent where Cécilia was housed. Once inside, the recent fortuitous death of one of the nuns provided Julie with a plan to allow Cécilia to escape the convent: Julie stole the deceased nun’s body, placed it in Cécilia’s room, set the body on fire, which quickly spread to the rest of the room, forcing Cécilia to flee for her life and into the waiting arms of her lover. The two, reunited, ran away.

But like most of Julie’s affairs this one soon ended, not least because Julie was charged with grave robbing and arson, with arrest warrants pursuing the couple. Only through the intercession of her old lover, the Comte d’Armagnac, did Julie escape imprisonment or the death sentence. The Comte’s influence secured a royal pardon for Julie, the first of two she’d receive as a result of her flamboyance in love or with her sword.

Though Julie was famous, or infamous in some circles, for her way with a blade, she was also known for an astonishingly beautiful voice. After her royal pardon in the Bortigali affair, Julie was free to return to Paris, where she joined the Paris Opera. Soon becoming a star, where she was billed as La Maupin, Julie’s performances were often as brazen on stage as her life was off stage. In one performance, during a particularly passionate scene, Julie bit the ear of her operatic lover, causing the man’s ear to bleed!

Never one to be left out of a fancy party, Julie, dressed in men’s attire, crashed a royal ball in Paris, where various noblewomen were in attendance. Her eye on the most beautiful, Julie boldly sidled up to the woman and kissed her, succeeding where a number of male suitors failed. The men, their honor thus belittled, challenged the interloper to duels. Julie, of course, defeated them all.

She fled to Brussels, where she received the second of her royal pardons. The newly enacted royal decrees against dueling only mentioned men. Women, not normally associated with martial arts, were not mentioned in the decrees, thus paving the way for the king—who was said to be amused at Julie’s antics—to issue a pardon.

By the early 1700s, Julie embarked on what appeared to be a serious and loving relationship with Madame la Marquise de Florensac. The couple remained together a mere two years, from 1703 to 1705, due to de Florensac’s death.

Perhaps it was her sadness at de Florensac’s untimely death, or perhaps other elements dampened Julie’s natural flamboyance, but after her lover’s passing Julie d’Aubigny—swashbuckling adventuress, bisexual serial romancer, passionate opera star—retired, ironically, to a convent, where she died, still in her thirties, in 1707.