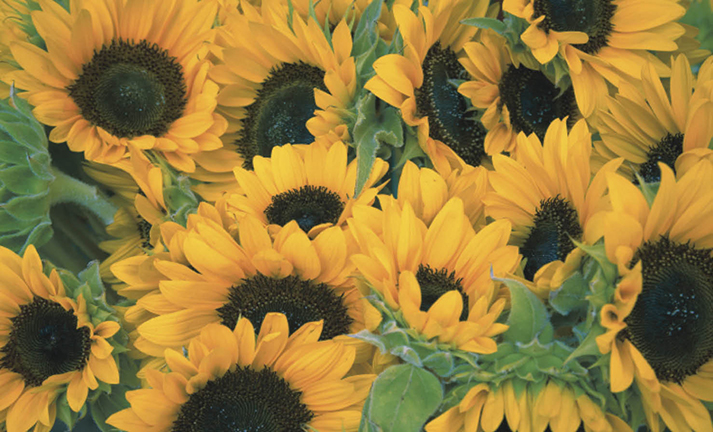 August is here and along with it the fast-approaching end of summer. Soon, the air will be filled with aromas from cookouts and the sound of children playing during the Labor Day holiday. Around these parts, it is the symbolic end of the summer season. However, it also means that the landscape will be filled with stunning displays of the yellows, oranges, and golds of the mighty sunflower.

Helianthus, from the Greek words Helios (sun god) and anthos (flower) describes the genus of plants that we refer to as the sunflowers. Our native species, Helianthus angustifolius, is known as the swamp sunflower. It thrives in moist to wet soils and can grow to five to 10 feet tall. Its bright yellow flowers can be up to three inches in diameter with a purple center. The leaves are narrow, long, and a glossy dark green.

The common sunflower, or Helianthus annuus, is an annual as the species name suggests. Sunflowers provide us with numerous commercially available products, including their delicious seeds. These seeds are a food source not only for humans, but also for birds and other wildlife. The seeds are high in vitamins B1, B3, and B6, and they can be made into a spread similar to peanut butter.

In the wild, they are found in old fields and prairies, but the domesticated cultivars are commercially grown throughout the United States. These are the more common flowers seen on farms and in roadside stands for sale in arrangements that brighten anyone’s day. Other products stemming from sunflowers are flour, oil, and even a coffee made from their roasted shells.

All parts of the sunflower are considered valuable. Their stems, which are fibrous and thick, were once used to make paper, and the leaves were used to feed cattle. In addition, several parts of the plant have therapeutic properties and were used to treat coughs, colds, and bronchitis. A tea made from the flowers was used to lower fevers. The beautiful yellow flowers were even used to make dyes.

Another species worth planting in our edible landscapes is the Jerusalem artichoke, Helianthus tuberosus. Also called sunchokes, their tubers are highly prized for their taste and texture. The tubers can grow to be the size of a medium potato and can be used as a potato substitute in many dishes. They can be sliced and pickled or used raw in salads. Sunchokes are considered one of the best edible plants in the wild. They can reach heights up to 10 feet, prefer full-sun exposure, and can tolerate a range of soils.

Other sunflowers in the genus include Helianthus divaricatus, or the woodland sunflower, and Helianthus giganteus or giant sunflower.

Sunflowers also have the ability to absorb toxic metals, minerals, and radiation from the soil; as a result, they are called hyperaccumulators. In fact, fields of sunflowers were planted after the tragic events of Hiroshima, Fukushima, and Chernobyl to help ameliorate the radiated soils. The radiated isotopes and other toxic substances are taken up into the plants and stored in their leaves and stems. The sunflowers are then harvested and disposed of as radioactive waste.

Sunflowers symbolize happiness, loyalty, and adoration. Being native to the Americas, the ancient Incas worshipped and held the sunflower in high regard as it symbolized their sun god. Priestesses wore sunflowers in their headdresses, and they were often decorated with gold.

Sunflowers, the quintessential summer and fall blooming plant that follows the sun with its nodding head and bright rays of petals, putting smiles on anyone’s face that looks in their direction. In the words of the Beatles, “Here comes the sun, and I say it’s alright.”

Stay cool, and let’s garden together! ▼