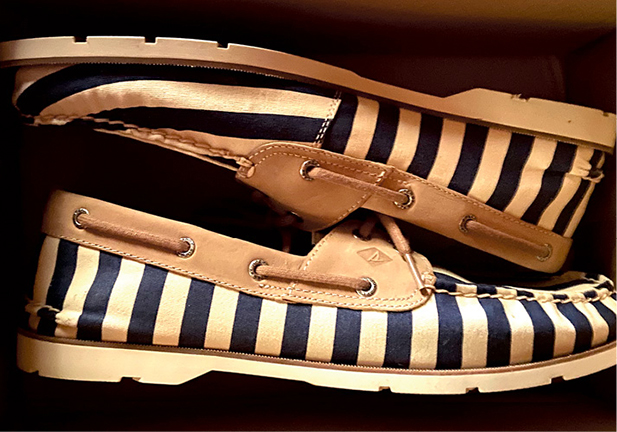 I was perusing the outlets the other day for a new pair of casual shoes. My flip-flops were leaving unsightly calluses on my heels and I was tired of covering up the holes in the soles of my Gucci loafers with duct tape. Suddenly, unexpectedly, I came upon the Sperry store. It’s a name I’m very familiar with yet hadn’t thought about since some time last century. I was intrigued.

At one point, Sperry Top-Siders were my go-to shoes and it’s not because I spent a lot of time on sailboat decks. No, my introduction to Sperry’s classic boat shoe came on a fraternity house dance floor at the University of Virginia back in 1979. It sounds ridiculous, but keep in mind the wooden floors at dear old Theta Chi were incredibly slippery due to vast quantities of spilled beer. Smart preppies wore Top-Siders to keep their balance while executing intricate dance maneuvers such as dips, spins, pretzels, and double pretzels.

Preventing a fall is what drove Paul Sperry, a Connecticut sportsman, to invent the shoe in the first place. An avid boater, Paul had served in the Naval Reserve in 1917 and was a member of the New York Yacht Club. His grandfather had been a boat builder before serving in the Civil War. You could say boating was in his blood.

One winter day in 1935, Paul was watching his cocker spaniel, Prince, run around on ice when he had an “aha” moment. After examining the dog’s paws, he used a penknife to recreate its design on pieces of rubber. He subsequently modified the dog paw design into a zigzag paw design, which proved to be even more slip resistant. Within a few years, he was producing a stylish canvas boating shoe with this unique non-slip sole.

A leather version soon followed. It was innovative too with its moccasin design and lacing that wrapped around the shoe so it could be tightened up. The leather was tanned using a unique process to enable it to hold up to salt and water. He named it the “Top-Sider” because it simply helps keep you topside on a boat deck.

Sperry’s shoe subsequently caught the eye of US War Department officials who used its sole design for Navy shoes. In 1941, Paul sold his patents and the Sperry name to the US Rubber Company, which made Keds sneakers among other products, and focused his career on the family textile business.

After the war, US Rubber continued marketing and selling Top-Siders to the boating community. Then, a couple of unexpected things happened which changed the perception and trajectory of Sperry brand products. The first was John F. Kennedy.

It is said the dashing young JFK wore leather Sperry Top-Siders during his time in the South Pacific aboard PT-109. He was photographed wearing them around Cape Cod during his presidency. His casual and sporty style sensibility influenced well-heeled college students in the early 60s, especially those in the Northeast, and what we now refer to as the preppie style was born. Top-Siders were among their shoes of choice. Secondly, surfers in southern California began wearing canvas Sperrys to the beach. The shoes became part of the 60s’ California surf culture craze.

Sperry was suddenly cool with a youthful demographic. Actor Bob Denver wore canvas ones on the popular TV sitcom Gilligan’s Island from 1964-67. Author Lisa Birnbach brought them front and center to prep school and college campuses in The Official Preppy Handbook, published in 1980. (I still have mine.)

Yachtsman Dennis Conner’s three America’s Cup victories in the 1980s helped to raise the shoe’s visibility even more when he became the brand spokesman. I don’t think it’s a stretch to say Top-Siders were the de facto footwear of the 80s. Until they weren’t.

It seems, however, they’re experiencing a revival. The company has been bringing in new designers to create witty and stylish makeovers to the iconic brand using bold colors and designs and different fabrics. There’s been more focus on shoes for women. Hip-hop celebrities like Pharrell have sported Sperry shoes. Esquire magazine even deemed the boat shoe cool again last summer.

I went into the store thinking I might buy the original brown leather model, for old times sake, but left instead with a blue and white striped canvas model. Some OG preppies might think them vulgar, and truth told, I did have a tinge of buyer’s remorse. It dissipated quickly once I slipped my feet into them.

And while I’m unlikely to be on a yacht or a fraternity dance floor in the near future, I’ll certainly be able to maneuver the ramps and decks at some of the local bars with confidence and style, after a few cocktails!##