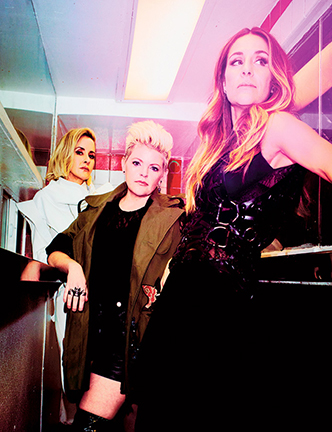 Chicks frontwoman Natalie Maines talks about the queer creators behind the trio’s comeback album and their kinship with the LGBTQ community.

Sitting somewhere with an abstract-art background obscuring her precise location, (Dixie) Chicks frontwoman Natalie Maines erupts into an explosive cackle during our Zoom call as she talks about how she’s about to get in trouble for saying too much.

After all, this is Natalie Maines, who directed pointed criticism at then-President George W. Bush in 2003 at a London concert, when the Lubbock, Texas native said The Chicks were “ashamed the President of the United States is from Texas.”

Country music blackballed them. Conservatives torched their CDs. The promo poster for the 2006 documentary about the fallout, Shut Up and Sing, depicted The Chicks sitting on top of the US Capitol building, their half-naked bodies graffitied with words and phrases like “Dixie Bimbos,” “Traitors,” and “Big Mouth.”

Returning after a 14-year recording hiatus, Maines, fortunately, still refuses to shut up on Gaslighter, the trio’s most authentic and unflinchingly personal album yet, where she is joined by sisters Martie Maguire and Emily Robison.

Let’s start with a different personal journey you’ve taken. It involves you watching Vanderpump Rules. Tell me what led you down that road—a road so many gay men themselves have gone down.

Ha! Well, let me say, it’s a part of my pandemic TV binging. I think with COVID, I’ve binge-watched shows I never would’ve binge-watched before, and Vanderpump Rules_ is a really good one, actually. I will continue to be a fan even after this pandemic! Ha!

You get to live vicariously through someone else’s drama.

I like drama at a distance! A big distance.

For Gaslighter, you worked with queer pop songwriter Justin Tranter and trans woman producer Teddy Geiger. How did working with LGBTQ collaborators help to shape the authenticity of the album’s narrative?

They kind of play different roles, but yeah, the first song that we wrote for the album was with Teddy and Justin, and it was “Sleep at Night.” That (track) was a very different sound for us and that really excited me. That was all Teddy. She went to these electronic drums and just started with that beat, and the way that Justin and Teddy can both phrase things very percussively and put them in the song was a real lesson for me that I try to do now and perfect and get better at. So, yes, as far as where we could go with the sound, they were very much there. And Justin is such a great lyricist.

You consulted different activist groups for the “March March” video, which features images from a Pride parade alongside footage from current Black Lives Matter protests. For the video, who did you consult from the LGBTQ community?

My friend Michael Skolnik, an activist and an organizer—and the founding partner of The Soze Agency, a creative agency focusing on authentic campaigns that uplift compassion and equity. We consulted him for the “March March” video.

Your relationship with the LGBTQ community goes way back, at least publicly. Have you always been a queer magnet?

I mean, I was always open to it. But growing up in Lubbock, Texas, I can think of people that I knew who were probably gay, but they weren’t out yet. I don’t even know if they knew that about themselves yet, necessarily. Lubbock was a very suppressive place.

You know, I’ve asked some of our gay fans, “What is it that has drawn gay people to us?” Because I think after the controversy there was an extra kinship for just understanding what it feels like to be hated by a mass group of people. But then fighting for what you believe is right, and standing up for yourselves, and not letting them shush you. Before that, what my friends have told me was what gay fans liked was the over-the-top sort of Spice Girls fashion. Ha! We were the cliché for every fad! We wore every fad all at once!

You must’ve seen a lot of Chicks drag queens then, right?

Yes. “Chicks with Dicks”—there were a lot of those kinds of revues.

The Chicks changed their name to meet the moment. The name change was subtle; there was no flashy press release.

Listen, we felt the pressure of, once you’ve had success, changing your name feels like a huge thing to overcome. We had had discussions about changing our name since 2003. But it seemed, just for whatever reason, too big a thing to do, and nobody was calling on us to do it. We just felt icky having Dixie in our name. Then, for us, we had to think of other names. We didn’t really want to have anything other than The Chicks, but we knew that that could legally be a really hard thing to get because it’s such a common word. So we had lawyers, and we took our time.##