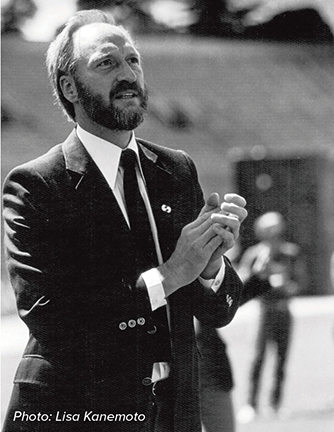 For much of the history of the western world, gay men were stereotyped as limp wristed sissies who’d sooner serve tea than run a mile, or as twee ballet dancers with mincing walks. Never mind that ballet dancers develop the musculature to leap like panthers or lift another human being and hold them high. And never mind that the ancient Spartans, those male companioned soldiers who held off a mighty invader with just a handful of warriors, insisted on an über-physical fitness and trained themselves to withstand pain. Sissies? Puh-leeeze.

There have always been queer athletes. It’s only recently that LGBTQ athletes have been freer to admit their sexuality publicly. But even now, among male athletes especially, being out still harbors risks to their professional careers in the macho world of team sports.

Dr. Tom Waddell wanted to correct the ill-informed idea of gay males as prissy pansies. His efforts eventually resulted in his founding the Gay Games, but it took a while to get there.

Born Thomas Flubacher in Paterson, New Jersey in 1937, his parents separated when he was a young teenager. At age 15, he was taken in by Gene and Hazel Waddell, and later adopted by them. The Waddells were veteran vaudeville acrobats. Noticing their son’s athletic prowess in high school, the Waddells encouraged him in his love of gymnastics.

His athletic success earned Waddell a track scholarship to Springfield College, where he co-captained the college gymnastics team. His initial major was physical education, but the death of his team co-captain so moved him, Waddell changed his major to pre-med. Graduating from Springfield in 1959, Waddell obtained his medical degree from the New Jersey College of Medicine at Seton Hall University.

Through these years of college and medical school, two elements of Waddell’s personality emerged as personal truths: his homosexuality and his sense of social justice. The social justice activist travelled to Selma, Alabama in 1969 to participate in the Civil Rights movement. And in 1966, after being drafted into the army, Waddell refused orders to serve in the Viet Nam war as an army doctor. Expecting to be court marshalled or dishonorably discharged for his refusal to serve in the war, Waddell was shocked to receive orders instead to train as a decathlete for the 1968 Olympic games. Talk about a man meeting the moment!

His Olympic experience in the Mexico City games, combined with his now secure awareness of his homosexuality, were the seeds of an idea. It developed further after he joined a gay bowling league in San Francisco, where he’d settled and established a medical practice in 1974.

Rather than hide his sexuality in mainstream Olympic competition, Waddell proposed a Gay Olympic Games, where athletes of all backgrounds and sexual identities could compete. By 1981, the project was in full swing, with the first games set to begin on August 28,1982, in San Francisco.

However, the mainstream United States Olympic Committee sued to prevent the games from use of the word Olympic, stating that associating the word with homosexuals would taint the mainstream Olympic brand. Waddell and his associates had no choice but to drop the term Olympic from the games. But even without the word Olympic, the first Gay Games proved a success. Four years later, the second Gay Games attracted over 3,000 athletes from around the world.

Today, the Federation of Gay Games is a worldwide enterprise, with games held in different countries every four years.

Dr. Tom Waddell was diagnosed with AIDS in 1985 and died in 1987. His adopted hometown of San Francisco honored his legacy by naming a street Dr. Tom Waddell Place, where the Tom Waddell Health Center is located. Honorable as these tributes are, Waddell’s insistence that the strength and dignity of LGBTQ athletes embodies the best in human competitive spirit may be his truest legacy.