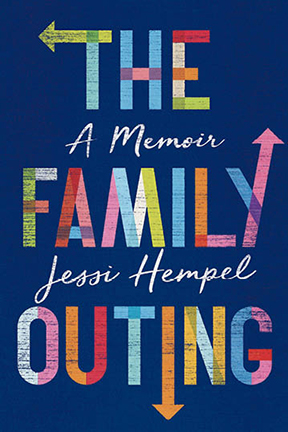 For most families in America in the last century, that was the maxim to live by: the kids are on a need-to-know basis and since they’re kids, they don’t need to know. And so, what did you miss? Did you know about familial philanthropy, rebellion, embarrassment, poverty? As in the new memoir, The Family Outing by Jessi Hempel, did secrets between parent and child run both ways?

“What happened to me?”

That’s the big question Jessi Hampel had after many therapy sessions to rid herself of a recurring nightmare. She had plenty of good memories. Her recollection of growing up in a secure family with two siblings was sharp, wasn’t it?

She thought so—until she started what she called “The Project.”

With permission from her parents and siblings, Hempel set up Skype and Zoom sessions and did one-on-one interviews with her family, to try to understand why her parents divorced, why her brother kept mostly to himself, how the family dynamics went awry, why her sister kept her distance, and how secrets messed everything up.

Hempel’s father had an inkling as a young man that he was gay, but his own father counseled him to hide it. When he met the woman who would eventually be his wife, he was delighted to become a husband and father, as long as he could sustain it.

Years before, Hempel’s mother was your typical 1960s teenager with a job at a local store, a crush on a slightly-older co-worker and, coincidentally, a serial killer loose near her Michigan neighborhood. Just after the killer was caught, she realized that the co-worker she’d innocently flirted with might’ve been the killer’s accomplice.

For nearly the rest of her life, she watched her back.

One secret, one we-don’t-discuss-it, and a young-adult Hempel was holding something close herself. What else didn’t she know? Why did she and her siblings feel the need for distance?  She was trying to figure things out when the family imploded….

Ever had a dream that won’t stop visiting every night? That’s where author Jessi Hempel starts this memoir, and it’s the perfect launching point for The Family Outing.

Just prepare yourself. The next step has Hempel telling her mother’s tale for which, at the risk of being a spoiler, you’ll want to leave the lights on. This account will leave readers good and well hooked, and ready for the rest of what turns out to be quite a detective story.

And yet, it’s a ways away from the Sherlockian. Readers know what’s ahead, we know the score before we get there, but the entwining of five separate lives in a fact-finding mission makes this book feel as though it has a surprise at every turn.

A happily minimized amount of profanity and a total lack of overtness make The Family Outing a book you can share with almost anyone, adult or ally. Read it, and you’ll be wanting to tell everyone. ▼