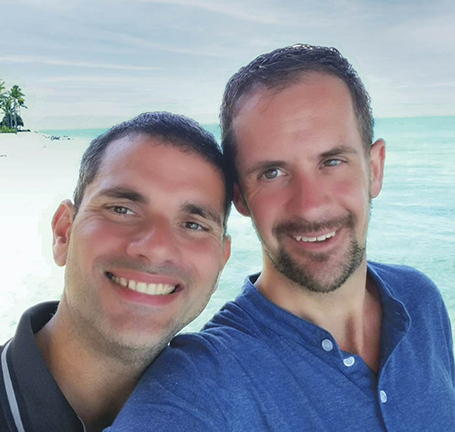 The Guest House is more than just a job to me. Some really significant personal events have happened here, including my life’s most special and wonderful moment: the day I met my husband.

But before we get to that day—10 years ago, my life was totally turned upside down and shaken up. I moved to Rehoboth in 2013 with my then-partner of over 15 years. To tell a super-long dramatic story in an extra-short way, apparently Rehoboth and a life of innkeeping weren’t for him. He left almost immediately, and I suddenly found myself alone and single.

I had a lot of self-discovery in store. I was starting a brand-new career, in a brand-new state, and I didn’t know anyone. It was a huge challenge. I had basically never been single in my entire adult life. I was struggling with who I was and facing the fact I had wasted 15 years with the wrong person. I didn’t want to go through that again, and I didn’t trust myself enough to let people get close to me again. I needed help, and I found it with an incredible therapist.

So, now I was at the end of the drama tsunami and was actually feeling pretty good about myself. I was doing well with just being me. I was totally fine with being single and decided I didn’t need another person in my life. I really enjoyed the dating game. I loved meeting new guys, going out, and skipping right away to the grand finale. I woke up looking forward to each day’s adventures and embraced living in a gay vacation destination. Every day provided new faces on the Grindr grid. I was like a kid with a new toy-store catalog every day, and an unlimited credit card.

Since I was buried in toys and surrounded by house guests daily, I was able to cover up the loneliness. By the end of 2015—an insane and rough year—and just as 2016 was about to arrive, I felt I was ready to start the new year as a new person—admittedly, one I barely knew yet.

New Year’s Eve that year was unusually warm. It was beautiful outside, and I decided to take my dog, Rambo, for a beach walk. I asked my housekeeper to keep an eye out for arriving guests while I was out. When I returned, she had left a big handwritten note on the kitchen island for me.

For her this was a big deal. She had been known to vet guys and chase them away before I even had a chance to meet them! So, I definitely needed to meet this guy she apparently approved of.

I waited for hours. Finally, as it got late, I gave up on seeing him that day. I took out my contacts, put on my (secret, only-wear-when-I’m-alone) giant coke-bottle glasses, and went out to the living room to close the house up before bed. And (of course!) there he was, sitting on the couch.

I felt an instant attraction to him, but—argh!—he simply could not see me with these glasses! I took them off, spun around as fast as I could, and ran right into the door! Embarrassed, I ran away, but came back shortly with my contacts in. He tells me that at this moment, he thought I must be a little nutty.

Well, we started talking, laughing, flirting, and it didn’t stop for hours. We talked so long, the ball dropped and we totally missed it. Finally, we decided it was time for bed.

But once in my room, I couldn’t stop thinking about him—how sexy he was; how nice and funny. I couldn’t sleep. So, I decided to be brave and go up to his room and see if he wanted to snuggle.

I replied, trying to be silly, “Room service.”

Confused, he replied, “But I didn’t order room service.”

So, trying to clear up the confusion I said, “But I really want to give you room service!”

Then there was a very long, extra-awkward silence, as I stood behind the closed door for an excruciatingly uncomfortable length of time.

Realizing I had made an embarrassing mistake, I started to walk away when—finally!—he opened the door and said, “Oh, I get it, now! Get in here!”

What an incredible New Year’s Eve it turned out to be! I wouldn’t have changed a thing.

Well, he apparently felt the same way. The next weekend, his name appeared on the reservation list. Then—again—the weekend after that. He came back every weekend he could.

Three years later, he proposed to me on Thanksgiving: my dog came up to me with a ring hanging from his collar. I looked up at Keith and found him on one knee, asking me to marry him.

In this job, you never know who the person you meet today is going to turn out to be. Browsing my guest list for that New Year’s Eve, I never expected one of those names to be the person who would become the love of my life. ▼

Tom Kelch is the innkeeper and property manager of the Rehoboth Guest House. He is thrilled to share these stories with Letters’ readers.