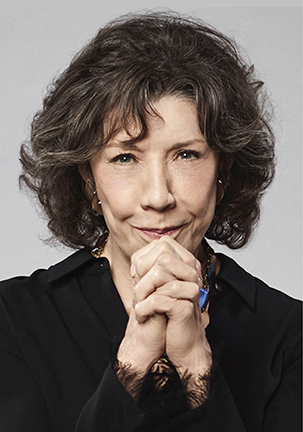 The “Classic Lily” tab on Lily Tomlin’s official website—noted as “the world’s only”—is, today, barely operational. It looks like it was created at the dawn of the internet and never updated.
The reason for this might be, simply, the same reason why, when we lose someone we love, it’s impossible to let go of what they left behind. Updating it means erasing a special footprint on that site—that of Tomlin’s friend Allee Willis, who years ago (“quite a while ago, I can’t even recall,” Tomlin says) made that webpage.

Willis, who sometimes went by the name Bubbles, created the page with “dignity and taste,” as noted in the signature seen at the bottom of that page. Willis was a Broadway composer, a multimedia visual artist, a graphic artist, a songwriter and, says Tomlin, “an all-around fantastical person.” She famously wrote the Friends theme song and was the only woman inducted into the Songwriters Hall of Fame in 2018.

“She was so involved in video and did so many things and had mastered it,” Tomlin told Pride Source. “And of course I was totally fumble floozy. Couldn’t do anything.”

Tomlin believes this was the beginning of a wonderful, enduring friendship as the two artists, both gay and from Detroit, bonded instantaneously. Though Tomlin couldn’t pinpoint exactly what brought them together, “once you [were] exposed to her, she just became a fixture in your life.”

Recently, Tomlin, 83, attended the LA launch event for the Willis Wonderland Foundation, called Night of Wonders—a fitting tribute to the magical mind of Willis, who died suddenly in 2019, at age 72, after suffering a cardiac arrest. The foundation supports the education and advancement of songwriters and multimedia artists, notably those in underserved communities.

Tomlin was eager to talk about the foundation, her friend, and the event, which RuPaul also attended. So eager, she and Willis’ partner, Prudence Fenton, tried to contact Pride Source on their own, unprompted, one recent Saturday evening, without a publicist involved, but were met with a voicemail. Prudence left a message. That’s just how important Willis was to Tomlin.

I’m sorry that you couldn’t get through to us, but I really appreciate the fact that you two looked up our business line and tried. Because it just says how much you want to talk about Allee. Clearly, she was a very special friend in your life.
Allee was so amazing. I think this Willis Wonderland Foundation is a wonderful, multi-level idea in keeping with Allee’s legacy.

She just blew me away, really. She was a total original. And all the people around her were always like a part of her family and they were so devoted to her, and the foundation plans on so many ideas and practical extensions of who Allee was. Her house is going to be the headquarters for the foundation. That magical, ideal ’50s house that’s filled with art. Have you been there?

I haven’t been there. Can you walk me through it?
Well, it’s just an incredible, typical ’50s suburban house with ’50s cars parked in the driveway. Old Chryslers and things. I have a ’55 Dodge Royal Lancer myself. She’s got seven bowling balls in the front yard. And then in the back she has a beach blanket around her pool. And then in the house itself, it’s totally magical. She had an alter ego, Bubbles the artist, that she never admitted to being, but she managed Bubbles. And Bubbles created all this porcelain dinnerware and display pieces. And I have several pieces myself with Ernestine’s [Tomlin’s famous telephone operator character] image on it.

She testified before Congress on behalf of the songwriters in fighting for their access, their right to their material, and not being ripped off by the media in certain ways. And her wardrobe alone was a visual statement. Her massive wardrobe alone. Her haircut. Everything about her, she was tireless. Just constantly had a big audio-visual setup that she worked. 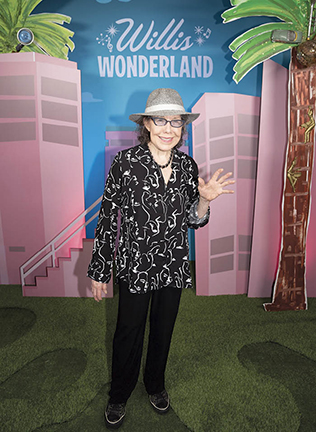 Did living in Detroit have anything to do with your friendship?
I think it really does. I think so many people, especially from our era, were from Detroit.

But you didn’t actually meet Allee here in Detroit?

No, I didn’t meet her in Detroit. Not that I’m aware. I was looking at her bio and her awards on the internet. And she came to LA in ’69, which is the year I’d just gone to California to be on [the TV series] Laugh-In.

Did you two ever bond over Detroit?
Oh yeah. If you’re from Detroit, I mean, it’s in your blood. You just don’t turn away from it. It’s imprinted. I thought it was the greatest city in the world. It was gritty, it was hardcore, it was political. I mean, I lived in that kind of neighborhood. And then, a very short distance from me were the rich sections like Sherwood Forest and Palmer Park, Palmer Woods, and then I was aware of Grosse Pointe. And my first character was a Grosse Pointe matron. I did it in a college show.

Wait, really?
Yeah. It was just about the time that Grosse Pointe had found out that it had a merit system where it rejected sales of ownership to anybody of questionable origins. Which meant not Waspy. Kathy Ford became a good friend of mine, and she was Henry Ford’s third wife. And I’ve had so many connections. When I was doing 9 to 5, she was stopped in the car with Henry when he said [his famous line], “Don’t complain, don’t explain.” We were on the same page in Time magazine when they had those old news items, and Kathy and I were both there. And I renewed my friendship with her around that time.

Aside from the website, what else did you work on with Allee professionally?
She would do things at the gay center [Los Angeles LGBT Center] and I would present her, or I would present Bubbles. And she would hang her china on the walls. One time she did a plate of me and my partner, Jane [Wagner]. Separate plates. And they were so outrageously funny. When I walked in and I saw those plates on the wall, I started laughing. I just was overcome with laughter.

[Publicist chimes in with a heads up that we have five minutes left.]

Before we wrap, I’d like to ask you about the Night of Wonders event. It sounded magical. And it also sounded very queer to have you and RuPaul there. What was that like?
It was wonderful because everybody was so devoted to Allee. They’re all freakish, anyway. And they have great fun and they love to dress up. And they’re running back and forth on the stage and carrying signs. It was filled with artistic joy.

Lastly, Lily, what do you have coming up?
Well, Jane Fonda and I, right after Grace and Frankie, like a month later, we went into this movie with [director] Paul Weitz. I’d done a couple of movies with him before and I really like him. It’s called Moving On. It’s a very small, intimate little movie. And I know they’ve sold it and they’re negotiating the distribution, but that’s all I know. And we had great fun doing that. And then about a month after that we did 80 for Brady with Jane [Fonda] and I, and Sally Field and Rita Moreno. And Tom Brady.

You have to know Lily, but that cast right there is a queer man’s dream.
It is, right? My god. Something appeals! But Tom Brady is…it was just none of us knew anything about football.

But it was great fun; we had fun with the director. We had fun doing the project

You and Jane have spent a lot of time on screen together over the last decade. What’s that feeling like to know that you are so beloved on your own, but also so beloved together, especially by LGBTQ+ fans?
I’m so grateful that I have an audience in the gay community. And it doesn’t compute to you that you’re anything. I realize that people like Grace and Frankie, or enough people liked it. And I know that over the years I’ve had hardcore fans that I’ve really enjoyed being with and relating to, because I’ve kept the stories of my characters going all those years. ▼

To contribute to the Willis Wonderland Foundation, visit the official site at one.bidpal.net/williswonderlandfoundation.