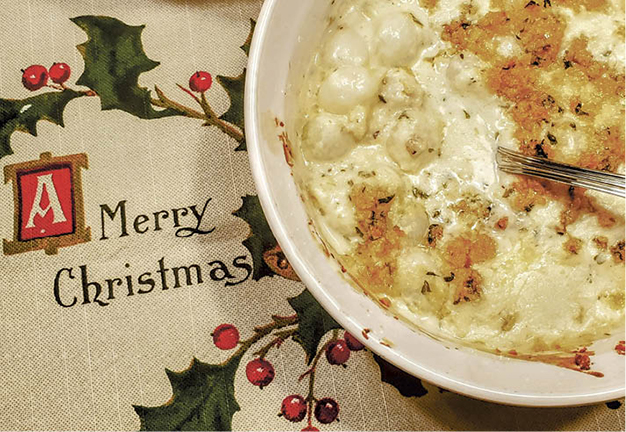 I was on the Martha Stewart show once. No, no, please stop clapping. And by all means, sit back down. It’s not that impressive.

What happened was we went with our friends George and Tim to drink in New York City at Christmastime. Rockefeller Plaza, Macy’s, etc. And we decided to take in Martha’s new, post-prison, live audience show. It was us, a sprinkling of other gay men, and 200 women in appliqued sweaters. Keep in mind, this was before tacky Christmas wear was en vogue.

The producer had each of us write down a question we’d like to ask Martha on live TV. And me being me, I was determined to get picked. So much so, I was curling my arm around my paper like a fourth grader covering his answers to a math quiz.

The producer did pick me and escorted the four of us to special seats front and center. We clapped furiously for Martha’s cooking and crafts, including a homemade popsicle stick and clothespin wreath to display holiday cards. Although, the hot glue did give way and it started to fall apart. Exhale, she recovered like a champion and cut to commercial.

On cue, I stood up, looked the domesticity queen in the eye and said, “Hello Martha.” Cathy Lee Gifford, her guest during MY segment, interrupted to say, “I can’t see him but he sounds cute.” (Her view of me was blocked by a camera.) My friends have gotten a lot of laugh mileage from that moment, especially given my coquettish reaction. You’d have thought Anderson Cooper had called me sexy on Breaking News.

But I pressed on to ask my question—insert appropriate pause to build excitement—”Martha, how do you keep your Christmas tree fresh?” Mind you, I could care less. We had changed to an artificial tree years before. My 15 seconds of fame were complete. Life was downhill from here.

I won’t tell you her answer. It’s all over YouTube for you to enjoy. OK, that’s a lie. But it does deserve more than its paltry five thumbs-up, four of which were my Mom’s.

In all seriousness, I do like Martha Stewart. Especially at the holidays. She has a childlike curiosity and enthusiasm for cooking, crafting, gardening, and well, all sorts of things that make this time of year extra special.

This month I’m highlighting a riff on her creamed onions. Mine are a bit of a cheat as we’ll be using frozen pearl onions instead of fresh. And we’re not going to mess with a traditional flour and butter roux.

OK, you caught me, they’re nothing like Martha’s. Oh, well. Merry Christmas Martha and her followers, wherever you are!

Let’s get started, shall we?

 Combine over medium heat: 14.4 oz bag of frozen pearl onions; ½ cup low-sodium broth (chicken, beef, or vegetable); 2 Tbls white wine or sherry; 1 bay leaf; 2 tsp fresh thyme leaves; and ¼ tsp nutmeg.
 Heat for 10 minutes, stirring occasionally, allowing the onions to thaw and the flavors to steep. Meanwhile, whisk together: ⅓ cup heavy cream and 1 ½ Tbls flour.
 Thoroughly stir the cream mixture into the onions and raise the heat briefly to high. When you see a gentle boil, reduce the heat to low. Continue stirring occasionally and simmer for 5 to 10 minutes until the sauce thickens.
 Remove from the heat and add some kosher salt & pepper to taste. Discard the bay leaf and pour into a one-quart casserole.
 Combine: ½ cup fresh breadcrumbs or panko; 2 Tbls melted butter; ¼ cup grated Parmesan; and 1 Tbl fresh minced parsley.
 Sprinkle breadcrumbs over the onions and bake in a 425° oven for 10 to 12 minutes, or until golden and a little bubbly. Allow the onions to cool on the counter a little bit before serving.

• Expect about four side-dish servings as written, but this recipe readily doubles for larger casseroles.
• Beef broth will give the onions a deeper flavor to go with meaty dishes like pot roast. For ham, I’d stick with chicken or vegetable broth.
• You can serve the onions without adding the breadcrumbs and baking. Just make sure the raw flour taste has cooked off and the sauce is thick enough to stick to the onions once plated. But it is the holidays after all; diets be damned.
• Instead of black pepper, this is a great dish to highlight white or pink varieties. Give it a try and let me know how you make out. ▼

Ed and his husband Jerry split their time between homes near Harrisburg Pennsylvania and Bethany Beach. Ed builds websites to pay the bills but loves to cook, garden, hike, and dote on their dog Atticus. Recipe requests and feedback welcome: ed@seasalttable.com.