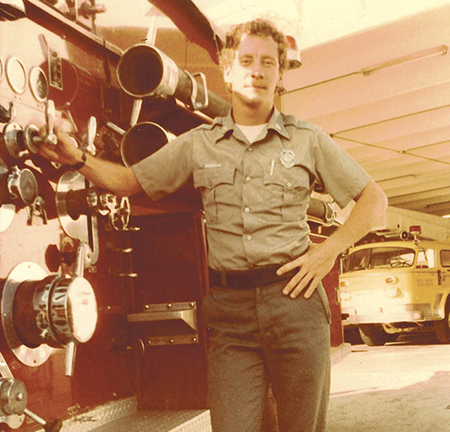 I had long dreamed of becoming a professional firefighter. But when I joined the Key West Fire Department (KWFD) in 1981, I knew little about the firehouse environment. I expected to build camaraderie with fellow firefighters so that we could trust each other in emergency situations. I also imagined sharing communal meals and engaging in occasional rowdy horseplay to alleviate stress and strengthen friendships.

My recent book, Alarm in the Firehouse: A Memoir of America’s First Openly Gay Professional Firefighter, provides an honest account of my years in the KWFD. It is a story of resilience in the face of homophobia and abuse—but it also is a story of unexpected acts of compassion, support, and professionalism. There were firemen who supported and mentored me. And I owe much to the mentorship of a dear friend, a lesbian-feminist peace activist named Barbara Deming.

It is important to recognize my years in the KWFD occurred in the context of the early 1980s: there were no cell phones and the internet had not yet been established. Queer people were commonly harassed by police and other authorities. Only a couple years before, Anita Bryant’s anti-gay crusade had succeeded in reversing legal protections for homosexuals in the Miami area. Key West’s gay and lesbian community, however, was thriving. (That was the lexicon of the day; we didn’t yet have the LGBTQ+ mindset—or terminology).

That burgeoning community sparked considerable anger and fear amongst the island locals—generally called Conchs (pronounced Konks)—who feared the influx of resident homosexuals would destroy their way of life. An exponential increase in gay guest houses spurred a new wave of tourism and transformed a relatively sleepy little town into a vacation destination for gay men and lesbians.

Given the large gay and lesbian community, some may think it would be easy to be an openly gay firefighter in Key West. It was not. Some firemen were adamant that an openly gay man didn’t belong in the department.

Further complicating my situation: my years in the KWFD coincided with the emergence of the HIV pandemic. Against the backdrop of growing widespread panic in the American public, I had a job that called for me to eat, sleep, and work closely with other men in the firehouse. Some of the firemen petitioned for my dismissal, expressing their fear that I would ‘bring HIV into the firehouse’ and infect them.

Coming into a new workplace, I had anticipated that I would be subjected to the usual litany of homophobic slurs (faggot, pansy, queer, etc.). I didn’t foresee the unrelenting abuse I would suffer at the hands of a few bullies. Although I demonstrated my ability to do the job, they tried to get me fired. Why was I such a threat to these men?

Other firemen were bystanders who witnessed the abuse but refused to intervene. I didn’t trust that these men would ‘have my back’ at a fire scene; indeed, my life was put in danger more than once.

My experience is surely similar to that of others who have been the first Black…the first woman…the first person with a disability to forge a new path in an unwelcoming environment. My story is relevant also to contemporary struggles to achieve diversity, equity, and inclusion in America.

One reason I wrote Alarm in the Firehouse is that I fear LGBTQ+ history will be lost if it is not documented. It was important to me that I tell my own story; I didn’t want my experience to be confabulated, distorted, or diminished by someone else’s pen.

Another reason: I hope to illustrate how a sense of humor, personal integrity, and deeply held principles can help a person navigate conflicts and succeed despite adversity. I hope my story inspires others to have faith in themselves and the path they wish to take in life. My story also reveals a lot about the nature of masculinity and what it means to be courageous. Despite all I endured, I am still very proud to have served as one of America’s Bravest. ▼

Dr. Mallinson and his husband split their time between Washington, DC and Lewes, Delaware. A retired university professor, Dr. Mallinson is a public speaker and researcher who advocates for disenfranchised groups, particularly LGBTQ+ communities and persons with—or at risk for—HIV disease. His recreational interests have included gardening, running, scuba diving, skydiving, and bungy jumping. Alarm in the Firehouse is available at amazon.com.