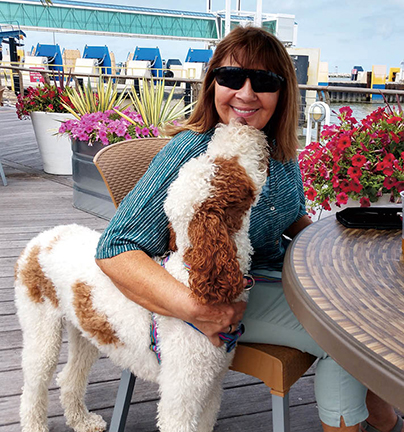 Hello to a New Friend

What do you call a woman who is a personal trainer, an improvement coach, a college professor, and an accomplished writer?

You call that woman Pattie Cinelli, who is the newest addition to Letters from CAMP Rehoboth. A health and wellness writer, she will debut in our March issue as one of the rotating group of contributors assigned to the Health & Wellness column. So, it’s about time we say hi and find out just who this fitness guru is.

Pattie writes about body, mind, and spirit, and is a self-described free spirit who has been writing, and getting published, since eighth grade. For more than 25 years, Pattie has written a health and fitness column for The Hill Rag, a monthly publication in Washington, DC, and has been quoted extensively as a fitness expert in national publications. She really knows her stuff. And her stuff is fitness.

As stated on her website (pattiecinelli.com), “Pattie is a popular fitness instructor of low impact, body conditioning, core conditioning, stretch, cycling, stability ball, and breathing and meditation classes. Combining the best of Pilates and Yoga principles to help students develop more flexible, stronger, and leaner bodies, Pattie created the Fitness Blend, a workout that focuses on the mind and body in harmony.”

She also served as an adjunct professor in exercise science programs at the George Washington University. Whew! I’m exhausted.

So how did Pattie’s journey take her to Delaware and the steps of CAMP Rehoboth?

After moving to Manhattan from White Plains, NY, she worked at the advertising titan Young & Rubicam at age 21. Visiting a friend in beautiful Hawaii, her short stay became six or seven months, and she ended up moving to Honolulu. Ever the achiever, she served in various communications positions, including a stint with the Associated Press. When her parents became ill, she pulled up roots and came back to New York to care for her family. She later moved to Washington, DC, ending up in the storied Capitol Hill neighborhood for many years.

During the 90s, Pattie became very familiar with Delaware, where she shared a beach house in Fenwick Island with 17 people. That qualified her as a real free spirit! While soaking up the sun, she helped organize Dewey Beach’s Doodle Romp, which grew from 40 families to 1,000 families during her time there.

Lewes got lucky when Pattie decided to settle there in January of 2020. After a friend saw an ad for writers for Letters from CAMP Rehoboth, Pattie responded, and here she is, prepping for March.

Now I don’t know anything about exercise. I haven’t seen my feet in over 20 years, and I can do three pushups if you give me a week to finish them. But I asked her why exercise was her thing.

Always athletic, she earned awards for kayaking and canoeing at an early age. To her, it was just fun. She started teaching jazzercise, which she loved, but when her dad died at 59, she stopped teaching aerobics and started to work in the banking industry, keeping her foot in the water by writing her features in The Hill Rag.

But she missed training, and in her words, was “not in it for the money,” so she went back to training and teaching, sometimes at a client’s home, sometimes at a gym. With one-on-one and small group training, some of her clients stayed with her for 15 to 20 years. Now, she is unsure if or when she will teach again, citing concerns about COVID and the difficulty exercising in a mask. I hope she returns to her teaching.

When I asked Pattie what’s the most rewarding thing she has done, she didn’t hesitate: adopting a mini-goldendoodle. For 15 ½ years, Pattie had the unconditional love of her dog Marcello. Together they shared many an adventure on Capitol Hill. Everybody knew Marcello, and he became an anchor in Pattie’s life. Sadly, Marcello died during the pandemic, and a devastated Pattie adopted another goldendoodle. Now she and Gianni are sharing more adventures in Angola by the Bay, and becoming fast friends.

When asked for three thoughts she’d like to leave her audience, Pattie replied, “we create our own reality. In the winter, you can see that a tree has no leaves, or you can see how majestic it is. Live with your heart, not your head. Our power is now, not how we were yesterday or hope to be tomorrow.”

What do you call a woman who thinks like that? You call that woman Pattie Cinelli.▼