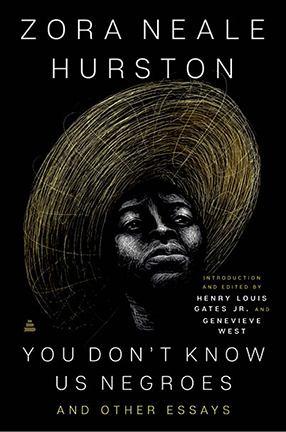 You Don’t Know Us Negroes and Other Essays
By Zora Neale Hurston, edited and with an introduction by Genevieve West and Henry Louis Gates, Jr.
c.2022, Amistad, $29.99, 464 pages

That’s just the way it was.

People did things differently in times past. They were a little more likely to judge others, a little less apt to open their minds. They had notions we might think are odd; they held beliefs that we know now are wrong. But as in the new book You Don’t Know Us Negroes and Other Essays by Zora Neale Hurston, times change. Sometimes.

Throughout her career of nearly 40 years, Zora Neale Hurston prodigiously wrote novels that resonate today. In this nonfiction book, readers get a taste of the other side of Hurston’s career: her journalism, essay-writing, and a reflection of the times in which she lived.

In the essay “High John de Conquer,” she offers “some help to our brothers and sisters who have always been white” by introducing them to a man who “romps...clowns, and looks ridiculous” and then disappears. John de Conquer is a scamp and a “mystery,” but he also offers hope and “the secret of Negro song and laughter.”

If you ever imagined what it was like to have been captured and sold into slavery, “The Last Slave Ship” is Hurston’s interview with Cudgo Lewis, the last survivor of the Clotilda. Lewis told Hurston about a rivalry between villages, his capture, the cruelty of the Dahomey king, and the eradication of an entire tribe of people.

Here, Hurston writes of novelist Fanny Hurst, encouraging readers to sample Hurst’s work. She mourns that white publishers of her time were reluctant to offer more diverse works because they believed that “the average American just cannot conceive of it.” She writes first with pride about attending Howard University, then about what led to her disillusionment and why she called Negro colleges “Begging Joints.”

She writes about noses and charm, being “a little colored girl,” and of having no race. With barely simmering anger, she reveals her “Most Humiliating Jim Crow Experience.” And she reports on the lengthy trial of Ruby McCollum, an experience that left Hurston in a dream “of fog and mist….”

For sure, You Don’t Know Us Negroes isn’t a book to take—or read—lightly.

From the beginning of the introduction to the very last words on McCollum, this book demands that readers stop and think about what’s been said. It’s natural that you would anyhow: much of what author Zora Neale Hurston observed in her day is still relevant now; Hurston died on the very cusp of the beginning of the Civil Rights Movement, and so racism and race issues feature highly in the works inside this book.

What’s unexpected—and very delightful—is Hurston’s voice. Some of these stories ring with a wonderful sense of sarcasm that tells you everything you need to know about Hurston’s mind-set. Some tales ache with frustration. Others spark like lightning in a jar.

This is a carry-it-everywhere-with-you kind of book, perfect for times when you need some introspection as diversion. You Don’t Know Us Negroes is like that, and that’s just the way it is. ▼