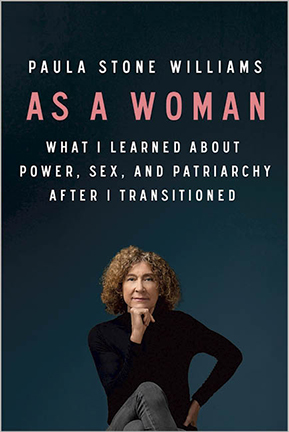 There are two sides to every story.

In politics, there’s left and right; in fairy tales, it’s good or evil. Guilty or innocent in court, salty or spicy mealtimes, dog or cat among friends, heads or tails. Sometimes you choose and at other times, like in As a Woman by Paula Stone Williams, you can see both sides.

From the time he was very small, Paul Williams thought that he “should have been born a girl.” He wasn’t bitter about it—not when he was a teen, not even as an adult—but it lingered in the background of his life.

Oh, he tried to tamp down his desires to dress in his mother’s clothes but he could not, though he knew it would anger her. She caught him once wearing his grandmother’s cast-offs and he never forgot her reaction; even so, he ransacked her closet at least once a week during his adolescence, hoping his parents wouldn’t come home early.

His feelings of furtiveness were perhaps exacerbated by a family legacy of evangelical ministry. Every man he knew was a leader in their church; when he was young, it was assumed that Williams would follow them, as if there was no other option. And so, dutifully, he became a CEO in a “church planting” organization. He married a woman he genuinely loved, and they started a family.

But the urges didn’t go away. As his children grew and left the nest, Williams began to explore the possibility of letting out the woman he was inside. He confessed everything to his wife, started hormones, and asked for his wife’s silence until he made plans for a transition physically and at work. He’d been at the organization for 35 years, and he was respected, although less than he believed. Williams was fired and humiliated.

Marriage in question, children shaken, job gone, he began to assess his life.

The world needed to know the truth.

Come to As a Woman looking for a memoir, and you’re going to be happy: most of the pages here tell a tale of transitioning while immersed in a major evangelical organization, which are generally incompatible things. This is interesting, told in an unabashedly forward manner as author Paula Stone Williams resists minimizing her male past.

Dig deeper, though, and there’s more to this book: its look at the difference in how society as a whole regards the roles of men and women, from someone with knowledge of both, is funny and sharp-eyed, and could serve as a primer-slash-warning for newly-transitioning women. It’s fiery, it’s sometimes the tiniest bit whiny, it’s a little repetitious, and it’s eyebrow-raising with a dash of heated argument-starter for zest.

In the end, As a Woman leaves a lot for female readers to agree with; Williams’ observations are honed, hard, and honest. Men, however—particularly cis men—could take umbrage at her observations and might give this book a little bit of side-eye. ▼