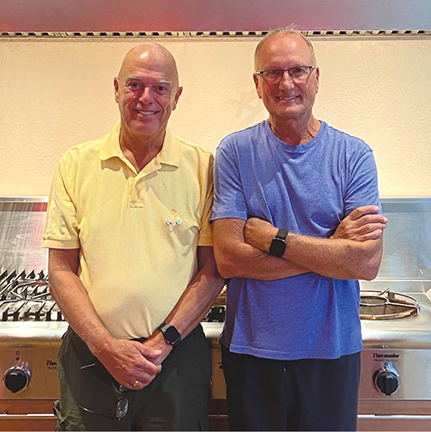 The Bread Baker and the Chocolate Maker

We all know the kitchen is the most important and social room in today’s home, but this especially rings true for Bob Nowak and David Bergman, two retirees from the DC area who now live in Rehoboth’s Canal Corkran neighborhood. David bakes bread and Bob makes chocolates.

And when I say that I don’t mean Parker House rolls and chocolate brownies…. Oh, no. These fellas are serious about their craft. They’ve studied at the French Culinary Institute and the Culinary Institute of America. They own and operate culinary equipment such as a dough sheeter to roll out laminated, uniformly thin sheets of dough in a few minutes, and a steel confectionary guitar to cut chocolate into clean, precise squares, rectangles, and diamond shapes.

A love of cooking and experimenting has always been one of the fundamental bedrocks of Bob and David’s 41-year relationship. You’ve heard the saying: the couple who cooks together stays together? It certainly rings true in their case. Cooking also figures in their relationship with Rehoboth.

The couple first began coming to the Delaware beaches on winter weekends back in the 80s. As Bob explains, “We’d load up the car with our favorite foods and head to Dewey Beach to spend the weekend walking on the beach, cooking, and hanging out by the fireplace with friends. It was hard to find a rental back then that still had the water turned on in the winter.

Remember how everything closed? Even the grocery stores?”

These desolately delicious getaways led to spending more time at the beach. They purchased a condo at Spring Lake in the 90s and then built their current house in 2004, a modern 3-level, 5-bedroom home designed with the help of a Chilean architect friend.

A couple of things stood out to me as the guys showed me around their home. First was how the windows and tall ceilings provide a light, airy feel, augmented by the fact that the main living spaces are on the second and third floors. The second, and most dramatic feature, however, had to be the 45-foot-long swimming pool right outside the second-floor great room.

Yes, you heard that right. Rather than digging a hole in the ground, the guys and their architect designed an elevated structure to support the pool some 15 feet in the air. They say it didn’t cost much more. And it certainly adds a modern panache and a wonderful space for parties and entertaining.

But as fab as the pool is, it’s the kitchen I wanted to see. Layout-wise, it’s incorporated into the great room and it, too, opens onto the pool. The first thing I noticed about it, though, was a lack of clutter. No toaster. No coffeemaker. No car keys or stacks of mail lying about. Just some knives and some bottles of olive oil. I thought maybe they’d tidied up because I was coming over, but no, apparently serious cooks don’t like clutter. It gets in the way of focus, process, and efficiency. All their appliances and gadgets are housed out of sight in space-saving, functional, wooden cabinets and drawers which combined with the stainless-steel appliances gives the kitchen a warm but sleek and serious look.

“A marriage of style and function is what you expect from a German kitchen,” David tells me. “We worked with SieMatic Kitchens, a venerable German firm with a showroom in DC. They helped us design the kitchen totally from the cook’s perspective.” The floors are cork, which is easier on the feet and back. The countertops are Silestone which is just as durable and more stain resistant than natural products like granite and marble, and easier to maintain. There are two stoves and two dishwashers. The sinks have foot-operated systems to turn the water on and off. And yes, David responds to my question: the accordion pullout spice drawer is alphabetized! I also particularly liked the library of cookbooks they house in a secret walk-in pantry.

When I ask the fellas what’s the most important thing to them in the kitchen the answer is unanimous: the big 4x7 island. That surprises me. I’d have thought the 72-inch, 6-burner big daddy Thermador range with pot filler, wok burner, and griddle. “Oh yeah, the range top is great,” says Bob, “and a wonderful luxury, but the island is where the magic happens.” It makes sense. It’s the workspace where dough becomes bagels and baguettes, and chocolate is transformed into truffles and ganaches. And sometimes when the two mix perfectly—say, into a flaky croissant with a creamy chocolate filling—the pastry becomes the perfect metaphor for their culinary passions, their relationship, and their kitchen.