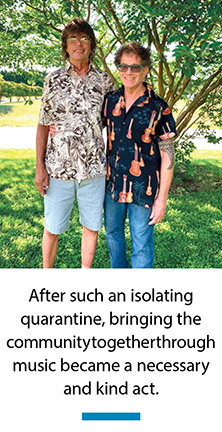 A Uke, a Garden, and a Life of Pride

Coping through the last year and a half meant focusing on hobbies and finding outlets to share them. Facebook friends of Robb Mapou, also known as Robb the Uke Guy, are privileged to experience his outlet personally.

Since last summer, Mapou has been sending personalized song messages to friends who list their birthdays on Facebook. The trend began in May 2020, when Mapou was asked by his cousin to make a birthday video for her father, who was turning 90. Like many during quarantine, he hadn’t been doing too well, but this little greeting sparked a sense of joy. A few months later, in July, Robb extended the greetings to his close friends on Facebook, and eventually, the practice snowballed into a daily routine.

Besides playing the ukulele, Robb works full-time as a neuropsychologist specializing in evaluating patients with any disorder that affects the brain, including learning disabilities, attention-deficit/hyperactivity disorder (ADHD, formerly known as ADD), and autism. Robb’s clinical background gave him a unique perspective to lead a CAMP Rehoboth virtual discussion on coping with COVID-19 last November. The discussion covered the experience of anxiety and sadness over the loss of usual activities during the COVID-19 pandemic.

According to Robb, some of the responses to his Facebook birthday greetings illustrated music’s power to alleviate some of that COVID-induced stress. “The responses ranged from a like and comment to someone calling and telling me how much this meant to them,” he said. “One of those responses came from a straight colleague who said, ‘I didn’t expect that; it brought a tear to my eye.’ Another colleague I knew from organizational work told me, ‘that video really put a smile on my face and I haven’t been smiling much lately.’”

These reactions push Robb to keep sending the messages. “I know I’m making an impact, and I know that I’m making people happy,” Robb said. After such an isolating quarantine, bringing the community together through music became a necessary and kind act.

That’s why Robb jumped at the opportunity to participate in CAMP Rehoboth’s virtual open mics last fall. “Those were a great opportunity,” said Robb, noting that he attended every event.
Robb started playing the guitar at 12 years old, but it wasn’t until he fell in love with Hawaiian music later that he truly invested in his love for playing ukuleles. Now, Robb owns eight ukuleles.

Speaking of Robb’s love, his primary love, husband Mike Zufall, has been very supportive of his musical outlet. That’s partly because Mike understands the power of channeling self-expression into hobbies and has his own favorite outlet: gardening. Since he was a little kid, Mike has enjoyed gardening, and in Rehoboth, he became enamored with the agricultural possibilities.

“It’s one of the most incredible gardening experiences I’ve ever had because you can practically watch things grow here,” said Mike. “I’ve planted so much around our property—what was once a foot high or less, is now eight feet in some cases. It’s just a phenomenon to watch things progress and grow so fast,” he said.

Likewise, the couple’s love has blossomed high over the course of their decades-spanning relationship. After meeting in 1978 in Atlanta, the pair have been together since. They were married almost as soon as it was legal in Maryland, on their January anniversary in 2011. No matter where they were, though, they made sure to live their lives with pride, which, for the couple, is more than a month-long celebration in June.

“We practice pride every day,” said Mike. “I always encourage other people to do the same. We never hesitated to be ourselves. The closet is a very dangerous place. We’ve never been in it, and somehow we survived.”

In 2017, they made their official move to Rehoboth after visiting for almost two decades. During those days in the early aughts, Robb and Mike first heard about CAMP Rehoboth by picking up copies of Letters when in town during their first visits to Rehoboth.

“Ever since those early days, I’ve always grabbed one and read it front to back. I remember reading Fay Jacobs’s column in there and getting her first book,” said Robb. Now, Robb and Mike are part of Letters’s storied history. ▼

Matty Brown is the Operations Administrator at CAMP Rehoboth.

Photo: Mike Zufall and Robb Mapou at their home in Rehoboth.