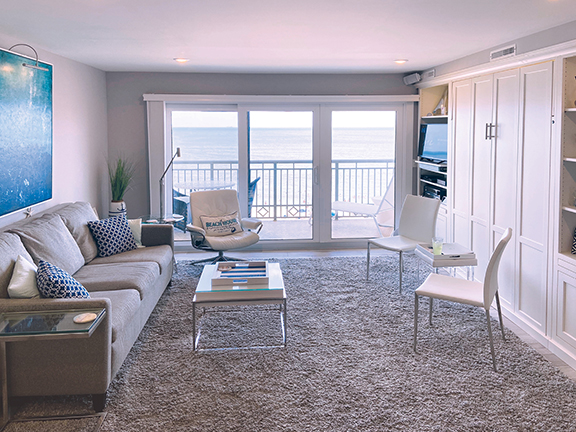 Have you wondered what it’s like to live in a condo overlooking the beach? I have, so I was delighted when Ron Bowman and John Swift agreed to open the door to their home at Edgewater House, the first condominium building built in Rehoboth, at 2 Virginia Avenue, and the first in Delaware when it opened in 1968.

Condominium is a Latin word formed by adding the prefix con, which means “together,” to the word dominium, which means “dominion” or “ownership.” The word originally referred to land over which two or more sovereign powers shared joint sovereignty and couldn’t agree on how to partition it.

The first condominium in the US was organized in New York in 1881. Cooperatives (co-ops) are a similar concept where people own shares of a joint building property and lease their actual unit from the cooperative. Co-ops were more common in many American cities until the early 60s. That’s when the condo concept that was so popular in Europe and the Caribbean really took off in this country.

Now that we understand the significance of Edgewater House to Rehoboth’s real estate history, let’s step inside.…

The first thing you see upon entering the fifth floor studio is ocean and blue sky through the big sliding glass doors opening onto a balcony. Yellow sunrises. Silver moonrises. Ocean breezes. Lightning storms. Rolling fog. Roiling sea. It’s an amazing and ever-changing view of nature from up here according to Ron and John.

“The lifeguard station is below us,” John says with a slight grin, “so the view on the beach isn’t too bad either.” He hands me a big pair of binoculars and directs me to the lifeguard stand where a handsome dark-haired lad in red trunks stretches and flexes.

“He uses those binoculars so much I swear he’s getting raccoon eyes.” Ron laughs, then continues. “When I was a kid, my family vacationed at Edgewater House every summer. I’d spend all day on the beach and then fall asleep on the balcony feeling the ocean breeze and listening to the waves. It was magical.”

These memories were ones Ron couldn’t forget, not even after many years doing the group house scene and then building three houses with John in Rehoboth. The two actually met in 1997 at a beach house rush party in DC—some readers will remember these. Each was pursuing the same cute guy to join his respective house, but instead found each other. They’ve been together since. They think they’ve been members of CAMP Rehoboth since then, too.

“We’d come to Rehoboth,” Ron says, “but sometimes never see the beach. We hosted friends, we’d go out, and we tackled the never-ending house projects. And then there was the commute back and forth to Howard County, Maryland, where we lived and worked. It wasn’t always relaxing.”

When Ron retired last year from a career teaching music and with John able to work for his textbook publishing firm from Rehoboth, the couple decided to make a change. They sold their house in Maryland, turned their Rehoboth house into a summer rental property, and moved into the Edgewater condo. They wanted to finally relax and enjoy the beach.

Relaxation, though, would have to wait. John shows me a series of frightening pictures on his phone: ancient Berber carpeting, harvest gold linoleum floors, rattan furniture, and a dark closed off kitchen. Even a flowered sofa! The place screamed “outdated beach condo.”

Because the studio was going to become their main residence, the men needed to be clever in their redesign as the limited space posed quite a challenge. Every inch mattered. They removed a kitchen wall to open things up and put in sleek, high-end, apartment-sized appliances. The dishwasher is a mere 18 inches wide. The bathroom they kept as big as possible, replacing a tub with a wide walk-in shower. Instead of a hot water heater they went with a small tank, on-demand system. They even redesigned the HVAC ductwork to take up less space and add more vents.

Early on they decided they didn’t want the studio to look like a hotel room, so they hired Pennsylvania Amish carpenters to build in a wall of cabinets, drawers, closets, shelves—and a big Murphy bed. The craftsmanship adds dimension and texture and offers storage to keep the place clutter free. A color palette of light gray, white, and pale blue completes the ethereal vibe of their sky pad.

It is very relaxing and smartly designed to emphasize that magnificent view. I ask if they can see the dolphins. “All the time. We even saw whales once,” Ron tells me. “We saw their tails and their spouts. Oh, and for the record, it’s the only time I’ve used the binoculars….”

As Ron walks me out, I can’t help but wonder why more people don’t consider condo living in Rehoboth. Ron and John have pared down their home to the essentials. They don’t worry anymore about house chores. A central location means they can walk everywhere and they are literally steps from the beach. I think they’re onto something. As I rush back to my cottage to water the garden, sweep the steps, and clean the porch before friends come for drinks, I realize it’s July already and I’ve yet to make it to the beach. Hmmmmm…..