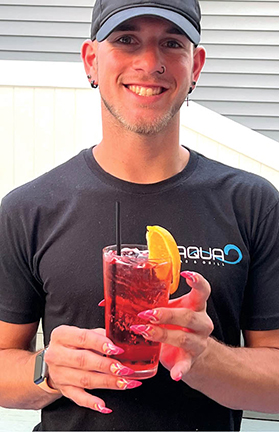 Bitter cocktails are all the rage today. Even the naked pool boy waiters in Key West this past winter were sporting orange baseball caps advertising Aperol, an Italian orange and herbal liqueur that’s experiencing a resurgence in popularity. Many cocktail enthusiasts are touting the low-alcohol, bittersweet Aperol Spritz as the “it” drink for 2022. Naturally, I had to try one. The cocktail, that is.…

My introduction to bitter cocktails, however, began 20 years ago. I trace it to the midmorning Manhattan drinking parties an eccentric neighbor used to host on the shady front porch of his old Rehoboth cottage. Oh, don’t gasp. There was a time when it was perfectly acceptable for gentlemen to enjoy a cocktail in the early hours of the day. A classic Manhattan cocktail should contain a dash of Angostura bitters. My friend had a heavy hand with the bitters. He also preferred a lemon twist rather than a cherry.

Things often tended to get blurry on that screened porch, but I kind of remember a bottle of red liquor and a bowl of ice showing up on his cocktail table one morning. It was a bottle I’d seen before—usually tucked away high up on a bar and gathering dust—but had never tasted. Campari! The godfather of bitter liquors. Things were about to get more interesting.

Nobody knows the exact ingredients of this classic Italian spirit invented in 1860. Campari keeps its recipe extremely private. But mixologists believe it is made from herbs, spices, bark, fruits, and fruit peels. I was intrigued. Even more so when he handed me a glass of Campari on ice and told me the liquor’s carmine red color came from the shells of crushed up beetles. It looked like a summer punch but tasted like orange peel. The Italians say it takes three tries before you acquire a taste for Campari. For me it was love at first sip.

Should you wish to explore the world of bitter cocktails, it is important to understand a couple of basic principles. The first thing you should know is that there are two types of bitters. Apéritif bitters (such as Campari and Aperol) are typically enjoyed as a beverage served before a meal or at cocktail hour. The bitter flavor is said to stimulate the appetite. Cocktail bitters (Angostura or Peychaud’s) are used only a dash at a time in a drink to add extra flavor.

Remember the difference this way. Apéritif bitters = big bottle. Cocktail bitters = small bottle. Another word of advice: Don’t listen if a bartender suggests serving a bitter cocktail neat. You want the ice because it assists in releasing the bitter botanical aromas without diluting the flavor.

Though there are many bitter cocktails one might sample, let me recommend four in the apéritif category. The first two are on the lighter side and might be thought of as daytime drinks. The others are a bit boozier, and I urge moderation if you start at happy hour, else you find you’ve missed dinner and eight o’clock has somehow become midnight and all that entails.

Campari and Soda—bubbly and bitter, this is my go-to, summertime, happy hour cocktail. Order it with a squeeze of lime or an orange slice, but never, ever refer to it as a spritzer. It’s too stylish for that. And, as it is three parts soda water and one part Campari, it’s very low in calories.

Negroni—probably the most well-known Campari-based cocktail in the world. An equal mix of gin, sweet vermouth, and Campari, this citrus-forward cocktail exudes coolness and chic simplicity. James Bond orders a Negroni in the 1981 film For Your Eyes Only. Need I say more?

Boulevardier—this French cousin of the Negroni and a distant relative to the Manhattan is a mix of Campari, sweet vermouth, and bourbon. I’d never heard of it until a drinking companion suggested I try one. Named after a 1920s Paris literary magazine, its taste has been compared to the way illustrations in a 100-year-old book look or how old leather feels. Drinking one, it has been said, feels like floating around in a lava lamp filled with sweet cherries and bittersweet orange peels. Yeah, it’s that damn good.

In closing, I hope my words have piqued your interest in bitter cocktails. Try one this summer and tell me what you think. Oh, and if you’re worried about ingesting beetles, don’t be—Campari stopped using them in 2006. Salute! ▼