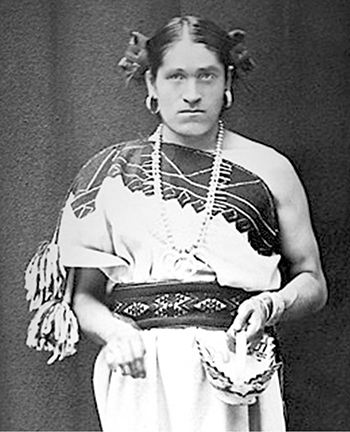 These days, our LGBTQ+ community offers a multitude of gender identities and an array of personal pronouns. Though the freedom to identify as one likes is accepted and celebrated amongst ourselves and our straight allies, out in the straight world our spectrum of identities and pronouns is sometimes met with a raised eyebrow of confusion, or worse, a sneer of contempt. The modern world clearly isn’t modern enough to broaden its collective mind.

But a far older world right here in America has understood for centuries that gender is not always an immutable binary of either/or female or male. So it seems fitting, in anticipation of International Day of the World’s Indigenous Peoples (August 9), that we celebrate our own Native American communities and their heritage of gender insight.

By now many of us are familiar with the Native American recognition of certain members of their communities as “Two Spirit”; as individuals who embody maleness and femaleness equally. While researching for this column, I came across an especially distinguished Two Spirit member of the Zuni tribe. Let me introduce you to We’wha.

Born in 1849 in New Mexico, We’wha was orphaned as an infant, their parents likely victims of a smallpox epidemic. (Note: in keeping with current practices among various scholars writing about We’wha and other Two Spirit Native Americans, I will be using the pronouns “they” and “their.”) According to Mariana Brandman writing for the National Women’s History Museum, the child was adopted by a maternal aunt, and by the time We’wha was three or four years old, the community recognized that the male-bodied toddler exhibited both male and female traits and was thus a true Lhamana (the Zuni word for Two Spirit). Consequently, We’wha wore both male and female attire and was schooled in skills usually assigned to either men or women. They became a member of the Kachina Society, a brotherhood entrusted to perform sacred masked ceremonial dances. A true Lhamana indeed.

But We’wha’s story is bigger than just an example of an admirable gender-fluid cultural practice among the Zuni. We’wha entered into mainstream American cultural and political history as well.

We’wha and Stevenson’s intellectual bond formed the basis of a deep and lasting friendship. This trust between them resulted in Stevenson convincing We’wha to travel to Washington, DC in 1886 as a member of a Native American delegation. The trip was meant to alter the national perception of Native Americans as a savage, conquered race, and instead introduce the country’s political and cultural elite to the rich traditions of America’s Indigenous peoples.

The trip was a success for We’wha, by all accounts, if an amusing one. In addition to meeting President Grover Cleveland, We’wha attended various Washington functions and mingled with the city’s political and cultural elite. The press covered We’wha’s every social activity. But what the Washington elite and the reading public saw was not a reality they could fully grasp. To them, We’wha was perceived as female, which in itself was considered unusual since women were not generally members of official delegations, Native American or otherwise. The newspapers even referred to We’wha as an “Indian princess.”

After all the hoopla of Washington, We’wha returned to their Zuni pueblo and the life of a Lhamana. Despite We’wha’s social and cultural success in the American capital, the US government nonetheless engaged in oppressive and land-grabbing practices against Native communities, the Zuni included. We’wha, previously the toast of Washington, was arrested along with other Zuni leaders and sentenced to 30 days imprisonment on a false charge of witchcraft. Upon their release, We’wha once again worked with Matilda Stevenson and other scholars in the hope of educating the American public in the beauty of Zuni heritage and the place of Two Spirit individuals in the human family. It was an enterprise We’wha maintained right up to the time of their untimely death at age 47 in 1896 from heart failure.

In today’s wild and frightening times, when our rights are threatened and our safety is at risk, we might do well to keep We’wha in mind as a reminder that traditions older than America itself embraced a fuller spectrum of humanity. Those traditions live on. ▼