Mary McElhone and Nancy Kaiser will not be attending SUNFESTIVAL—or Sundance—this year: They leave in early September on a long-awaited “glamping” trip to Africa and will be isolating for two weeks before departure. They went to South Africa in 2008 and are eager to return; this time, they’ll be headed for Rwanda with hopes of seeing the silverback gorillas, and Kenya and Tanzania to see the Great Migration.

Though they’ll miss this year’s Labor Day weekend festivities, these Founders’ Circle members have been a part of CAMP Rehoboth for decades. Early in their association with CAMP Rehoboth, they volunteered for Sundance and on CAMP fundraising related to the community center. They worked also on the Splash dance for several years, a predecessor to Women’s FEST, and on LOVE, an annual July weekend event that included dances at the convention center and raised funds for multiple charities. When the community center was being conceived and built, Mary was among those who volunteered to help review plans and move that effort forward.

Mary was a founding member of the CAMP Rehoboth Chorus and sang with it till COVID sent the chorus into hiatus. Though she was not quite ready to return to singing this year, she’s not ruled out rejoining the chorus in the fall when it begins rehearsals for its 2023 concert. Mary and Nancy also continue to engage with and support CAMP through their CAMP membership, and by attending various events.

So—how did these two long-time supporters come together? They first met late in 1999, at the opening night of the Rehoboth Film Society’s Film Festival, where they both were volunteering—Nancy as part of the Film Society’s Board, and Mary as a bartender for the evening. By spring 2000, both were single and they met again at dinners Nancy hosted at the time. They began getting to know one another better, discovering shared interests and common values. They married in 2011.

As with many of us, both Mary and Nancy moved to this area from elsewhere. Nancy arrived in 1996, following a career in Washington, DC, at the Smithsonian, where she worked as an administrator at the Hirshhorn Museum and at the American Indian “project”—the precursor to what became the National Museum of the American Indian. Mary moved here fulltime in 2006 (from Pennsylvania) after retiring from Verizon.

Once here, Nancy worked as a contractor, specializing in kitchen and bathroom remodeling; she just closed her business at the end of 2021. Mary did some contracting for a few years, ultimately working with Nancy; once they took another contractor into the business, she stepped away.

Nancy and Mary agree that “the original mission of CAMP Rehoboth was phenomenal.” They appreciate especially “the fabulous political work done with the General Assembly to secure LGBTQ rights. It certainly benefitted us personally—as well as so many others—but also helped make this a much more welcoming community.”

Asked about CAMP’s current efforts and future directions, they noted that “it’s wonderful to see the outreach to kids and young adults. It’s great that CAMP found a way to work with youth [e.g., through the schools’ Gender and Sexuality Alliances]. Today’s young adults may not need the same type of organization—and support system—CAMP offered our generation. But this generation has needs of its own that CAMP can help meet.”

They also applaud CAMP’s efforts to address the needs of transgender people. Mary noted that current efforts build on ones made many years ago: “When I owned a building in Rehoboth in the early 2000s, I rented to transgender tenants. Sometimes they were just getting started in their new lives and money was tight. Steve Elkins and Murray Archibald guaranteed the rents, supplying both the renters and the landlord—me!—with a ‘safety net.’”

Thanks, Mary and Nancy, for all your work on behalf of CAMP Rehoboth. And best wishes for safe—and wonderful—travels! ▼ 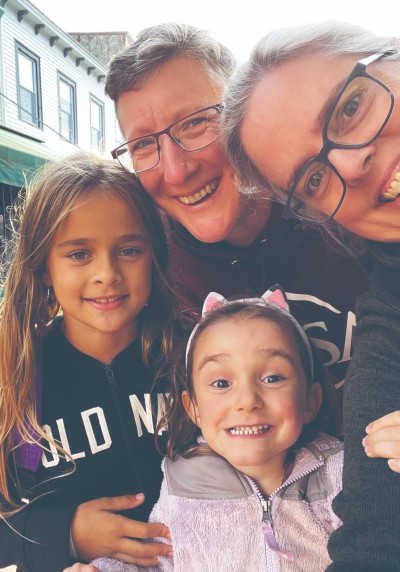 Like many couples of a certain age, Heather (she/her/hers) and Cathy (they/them/their) Rion Starr met via a mutual friend on social media. That was in 2010. At the time, Cathy was interning at First Unitarian Church in Portland, Oregon, where Heather grew up; Heather was in Oregon during her father’s final illness and was desperate to talk with someone about anything other than hospice. Fittingly, they went to see The Social Network on their first movie date.

They learned of CAMP Rehoboth as Heather considered a career move, and they were investigating the area’s welcoming (or not) “vibe.” The family visited the area in late-March 2021 and Heather picked up a copy of Letters as she explored Rehoboth. The visible presence of an LGBTQ community was one factor they considered, and they were encouraged by their realtor’s mention that it is a geographically-dispersed LGBTQ community—not just “contained enclaves” of queer people. Heather accepted the position at UUSD, and the family moved to Milton, Delaware.

And they are delighted they did! They love living here—the proximity to the beach, their super-friendly neighbors, the presence of lots of LGBTQ+ folks, families, and allies, and so much for the kids to enjoy.
While they have yet to go into the CAMP Rehoboth community center, Cathy and Heather were able to enjoy a dance at Women’s FEST. “It was great to look around and see so many women across a real range of ages and presentations and dance styles,” says Heather. She and their elder daughter took in the FEST Expo too; the cupcakes were a big hit!

Cathy and Heather also took in a performance of the CAMP Rehoboth Chorus which, despite some great music, they confessed they found a little disappointing: “It was jarring,” says Cathy, “to see so many straight-presenting musical numbers and none celebrating queer love. I was coming for some queer culture; I was coming to see myself represented.” Their expectations, they realize, were influenced by their experiences with the Hartford Gay Men’s Chorus, whose concerts were “out, loud, and proud.” (But well-supported in by the entire community nonetheless.)

One of their dreams for CAMP Rehoboth is that it might become more kid-friendly—maybe a drag story hour? CAMP Families is a program they’re hoping to connect with. They’re always interested in meeting and getting to know more LGBTQ+ families,  believing it’s a very good thing—especially for their children—to have all sorts of family models in their lives.

The CAMP Rehoboth Outreach Program (CROP) surfaced during our conversation; they felt that program, too, might work well as a family entry point.

Another dream is that CAMP Rehoboth will be more celebratory of being LGBTQ+. Noting that “gayness” is much more mainstream than it once was, they’d love to see CAMP embrace a sense of playfulness; of being out, loud, proud, and openly queer.

Both Heather and Cathy spoke to the apparent generational shift underway at CAMP Rehoboth, as well as in the larger society. And to the challenges inherent in honoring and serving the generation which established and supported the organization, meanwhile making space for the current and oncoming generations. “We’re in a very different place than we were 30 years ago,” they observed. In their own work, they’ve found it’s now more about “you do you”; about a longing to be who and what you are—not about fitting in or blending or assimilating.

Their ideal new executive director? “Someone who will lean into and lead an evolving LGBTQ+ community center, embrace the both/and, and celebrate queer culture. Someone who values the culture (and people) who created CAMP Rehoboth, but who embraces and makes space for the current generation and the upcoming ones—be they LGBTQ or I or A or NB or….”

Welcome to CAMP Rehoboth, Heather and Cathy! I’m thinking there are many ways you can help us as we grow and evolve. ▼

Marj Shannon is the editor of Letters from CAMP Rehoboth.