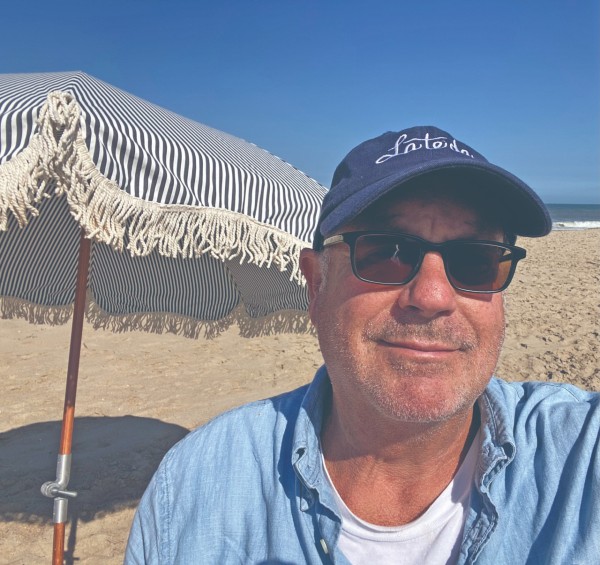 Many things catch my eye while sitting on Poodle Beach in the summertime; chief among them are beach umbrellas. Seriously. If you can pull your gaze away from biceps and pecs and abs to take the time to consider them, you’ll find beach umbrellas are much like beachgoers themselves. They come in all colors, shapes, and sizes. Some are old and faded, others are fresh and trendy. Nevertheless, they are omnipresent on the sand, standing tall or bending at different angles in their effort to provide the shade and protection we need from the sun’s powerful rays.

Protection from the sun is behind the origin of the umbrella. The word derives from the Italian word “ombrella,” a modification of the Latin “umbella,” which came from “umbra,” meaning shade or shadow. The ancient Egyptians are credited with the first umbrellas, constructing them from papyrus, feathers, and palm fronds to shade their Pharaohs and nobles from the sun. Egyptians revered pale skin. In 11th century BC China, umbrellas were constructed with silk and protected the nobility not only from sun, but from rain and snow. Umbrellas also signified status. The higher the status the more levels an umbrella might have. A Chinese emperor, for example, used a four-tiered umbrella.

The umbrella inevitably wound its way to Greece and Rome via the Silk Road where noblewomen adopted it to protect themselves from the sun. The umbrella subsequently came to be viewed as a fashionable feminine item. This connotation started to change when a French inventor started making collapsible umbrellas in 1710 and Parisian women and men began carrying them during rainy days.

British men, however, remained adamantly anti-umbrella until around 1750. That’s when writer, world traveler, and well-known philanthropist Jonas Hanaway began carrying an umbrella in public on rainy days. He was jeered and ridiculed by the press as an effeminate Frenchman. Men in London threw rocks at him. Horse and carriage drivers tried to run him over.

Interestingly, Hanaway never married, which leads this writer to wonder if perhaps he might have been a little light in the loafers. His umbrella reportedly had an ebony handle carved with decorative fruits and flowers. The outside was a pale green silk, and the inside lining was straw-colored satin.  His favored charities were those providing aid and assistance to Navy men. Need I say more?

A few years later, an Englishman invented the steel-ribbed umbrella, reducing its weight and strengthening its frame. Greater utility contributed to its increasing popularity. A select few wealthy men in London began commissioning custom umbrellas with handles that could contain flasks and daggers. Long story short, by the beginning of the 19th century the umbrella was a crucial item for any proper English gentleman.

About this same time, Europeans had also begun re-evaluating their relationship with the beach. The well-to-do began gentrifying fishing villages into posh resorts. Poets and artists began romanticizing the beach in their work. And with them came—yes, you guessed it—the umbrella to shield their pasty white bodies from the sun. It’s been with us on the beach ever since.

It did decline in popularity for a while in the 1920s because style maven Coco Chanel popularized the tan as a sign of affluence, and then again in the 1950s and 1960s when the invention of suntan lotion led people to eschew the beach umbrella. But it never truly went away.

I think it’s fair to say the beach umbrella today is more prevalent and relevant than ever before, primarily because people are more knowledgeable now about the harmful impacts of too much sun. But it’s more than that. Umbrellas are practical. But they’re also fashionable. Like the selection of a bathing suit or a beach hat or a car for that matter, one’s choice of beach umbrella says something about its owner.

All this got me thinking about my umbrella of choice, a vintage-looking blue-and-white striped number made by a company in Australia. It’s a tad expensive but oh so practical with 98 percent block-out and a UPF textile rating of 50+. More importantly, it’s trimmed in white cotton fringe. I thought it quite chic until someone commented that the fringe looked like it belonged on an old deck mop. Of course, he was old enough to know what a deck mop was…. I’m not quite sure then what this umbrella says about me, or if I really care. But I do think Jonas Hanaway would approve! ▼