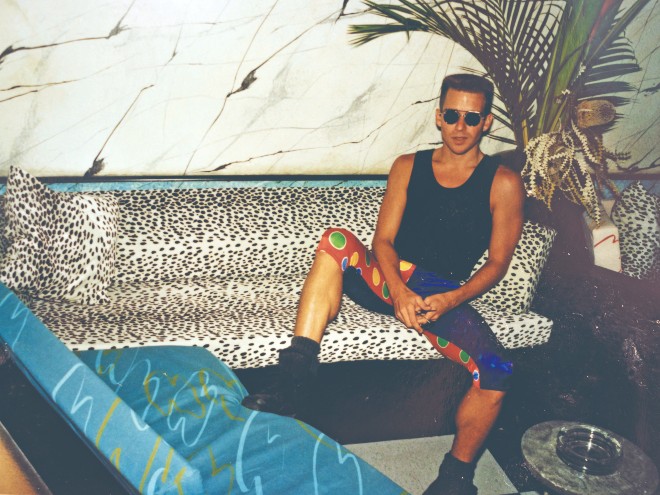 As I researched the history of 40 Maryland Avenue, currently the Rehoboth Guest House, a much bigger story began to emerge. CAMP Rehoboth, a local gay community center, shares its property line with 40 Maryland Avenue. The properties’ close proximity to one other, and both being very important parts of gay Rehoboth, lead me to wonder if the two properties had any shared history. Of course, there was no one better to ask than my neighbor, Murray Archibald, co-founder of CAMP Rehoboth.

Murray and his partner, Steve Elkins, came to Rehoboth as part of a group of incredible people who were hoping to open a beautiful, spectacular, and fun night club/disco called The Strand. Others in the group included prominent members of Rehoboth’s business community, such as Joyce Felton, Victor Pisapia, and Gene Lawson.

Baltimore Avenue “gay-sploded” in the 80s, with a new, vibrant line of successful businesses growing rapidly. The avenue developed at what might have seemed—for “lower slower” locals—to be light speed. Especially since in the 70s, Baltimore Avenue wasn’t very popular. I found this surprising, since it runs parallel to (and just one block away from) Rehoboth Avenue—Rehoboth Beach’s “Main Street.”

Property owner Bill Moore told me how difficult it was to sell property on Baltimore Avenue during the 70s. In fact, it was so challenging his family finally gave up trying when they had no offers at $16,000. Instead, the family kept their multi-lot property; Bill still occupies one of the family’s properties today. (Considering lots in this area now go for millions, holding onto the property has proven to be a very wise decision!)
Unable to sell, Bill’s family welcomed the newcomers and opened rental units—without discriminating against anyone who wanted to rent them.

Development in a largely residential area is often controversial, and Baltimore Avenue was no different. In a city center, you expect to find lively businesses; maintaining family homes in these same areas may become difficult and impractical.

Steve Elkins and Murray Archibald were going to have to deal with Bertha. So I needed to find out more about what happened, and I went off to what would become my favorite interview of this whole project.

When Murray talks with me about Steve and this time period in their lives, I can feel how special it was to him. Sitting in his apartment, I was surrounded by his wonderful memories. One entire wall was beautifully covered in marble; I had never seen anything like it. After noticing me staring in amazement, I learned from him it’s not marble at all. Rather, he painted the wall himself to look like marble, just like the walls I had read about him creating at The Strand.

Around his apartment, I also saw old flyers from The Strand, magnificent paintings, and exquisite photographs of Murray, Steve, and friends. All created by Murray himself in his art studio. I could feel Murray’s compassion everywhere I looked. I feel so lucky to have had the chance to get to know him, because I truly believe he is one of the most beautiful human beings I have ever met.

After talking to Murray, I really understood for the first time how much his experience in Rehoboth has meant to him. Recent memories might cause his eyes to tear, but he would smile as he remembered Steve, and how much he loved him.

He is extremely humble; I still don’t know if he truly understands the hugely positive impact he and Steve had on Rehoboth. When he talks about it, he seems to feel like they just did what they had to do, and what they felt was right at the time. No big deal, right? Imagine the world we could live in, if more people lived their lives following those simple rules!

What Steve and Murray did transformed way more than just Rehoboth Beach, Delaware. They helped change the whole country, by starting with one city that had a “gay problem.” They wanted to change the negative image of the local LGBTQ+ community and Create A More Positive Rehoboth. So, they came up with CAMP Rehoboth and began to gather support.

When I was sitting in Murray’s apartment, I could see out one of his windows. It looked right into the Rehoboth Guest House’s backyard and gardens. How lucky we are, to share a property line with such an amazing person—someone who actually helped make the world a better place. ▼