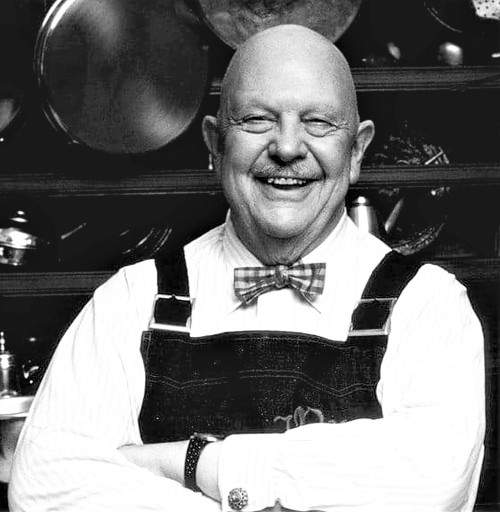 We probably like to think of our LGBTQ+ past as populated by heroic forebears who battled oppression; suffered the brutal consequences but insisted on dignity. Though this scenario is often true, and we can and should honor the heroes of our past, in reality LGBTQ+ heritage is like the rest of the human story: considerably muddled. In times past, when living openly meant the destruction of career and personal life, not everyone rose to heroism. Most did the best they could, sometimes acting honorably, sometimes shamefully, taking roads safest to their survival.

Within this muddle of difficult choices made in difficult times, various members of the LGBTQ+ community still managed to make significant contributions to the larger culture despite their perhaps less-than-sterling lives. Such a man was James Beard.

Prior to Beard there was American cooking, American food, even delicious regional American specialties, but Beard refined these elements into true cuisine. From the post-World War II era right up to his death in 1985, Beard insisted on fresh, locally sourced ingredients long before this idea became fashionable. In the 1940s and 1950s he pushed back against the homogenizing trend of canned goods, TV dinners, frozen foods, and all those packaged foods intended to make life easier on the housewife. Easier they may have been; tasteless they certainly were.

Beard was born in Portland, Oregon in 1903. His father wasn’t around much, and to make ends meet his mother ran an upscale boarding house which featured exceptional meals, often centered around Pacific Northwest seafood and produce. Her instructions to her Chinese cook, Jue-Let, were exacting, and Jue-Let, already a fine cook, carried them out to the letter. Young James was thus introduced to first rate cooking.
James’s initial aspirations, though, were not geared toward the kitchen but toward the stage. After a humiliating expulsion from Reed College in 1922 for engaging in a homosexual act, Beard traveled to Europe, where he found freedom in the underground gay life of London and Paris. He also joined a theatrical troupe, hoping to establish himself as an actor.

But Paris, as it does for so many travelers, introduced young Beard to high cuisine. He did not give up his theatrical aspirations, but the appreciation for good food, first established as a youngster in his mother’s house, was rekindled.

In 1927 Beard returned to the United States, where he still tried to make a name for himself in show business. He spent the next 10 years between Hollywood and New York, but show business success eluded him.

In 1937, after settling permanently in New York, Beard and friend Bill Rhodes opened a catering company geared toward the chic set’s cocktail party circuit. The company, Hors D’Oeuvre Inc., did well, affording Beard a reputation as an innovative cook. In 1940 he published the first of his nearly two dozen books, Hors D’Ouevre and Canapes, a compilation of the catering company’s recipes. The book was admired by Julia Child, with whom he remained friends throughout his life.

Many people think of Julia Child as the first television cooking show personality. In fact, the honor goes to Beard. After a stint in the Army during World War II, Beard hosted TV’s first cooking show, I Love To Eat, airing on NBC from 1946 to 1947. Thus Beard’s twin passions, show business and food, combined to make him a star.

Through his books, personal appearances, and the establishment of his James Beard Cooking School in 1955, Beard’s reputation as a chef, teacher, and connoisseur of American food soared. Throughout the 1950s and 1960s, his American approach to dining served as a counterpoint to his friend Julia Child’s emphasis on French haute cuisine. His books sold widely; his recipes graced millions of American dining tables.

By 1970 he’d achieved the financial success to buy the Greenwich Village townhouse where he lived for the remainder of his life, a life he now shared with lifelong partner Gino Cofacci. The townhouse was the site of Beard’s famous Christmas and Sunday Open House cooking gatherings. It was here at these gatherings that the dichotomy of Beard’s life became stark. In his public appearances, lectures, and writings, Beard never gave so much as a hint of his homosexuality, fearful that his popularity with the American public would collapse. But according to several sources who were present at the Open House events, these gatherings were often attended by downtown New York’s art and food scene LGBTQ denizens. In a time when being “out” was still precarious, despite the emerging gay rights and feminist movements, these cooking gatherings afforded jolly good times and exceptionally good food to a community still looking over its shoulder for any threat.

Despite Beard’s success, his stable relationship with Cofacci, and his worldwide reputation as a connoisseur and teacher, there was trouble in paradise. He was accused of plagiarizing recipes from other chefs, notably Helen Brown, an established chef of emerging California cuisine. Beard failed to credit collaborators, claiming their ideas as his own. And even as other LGBTQ public figures found the courage, through the gay rights movement, to come out of the closet, Beard continued to remain closeted in public, erasing all hints of his private homosexual life.

It’s fair to say that James Beard was flawed. His professional life was not always admirable; he treated his private life as an embarrassment. But we must forgive him. He is family. His contribution to American culture was enormous; perhaps not politically, perhaps not as an advocate for human rights. But when we sit down to eat at our favorite au courant farm-to-table, locally sourced, fresh ingredients restaurant, when we know better than to consider TV dinners genuine dining, we should raise a glass in toast to the large gay man in the bow tie, James Beard. ▼