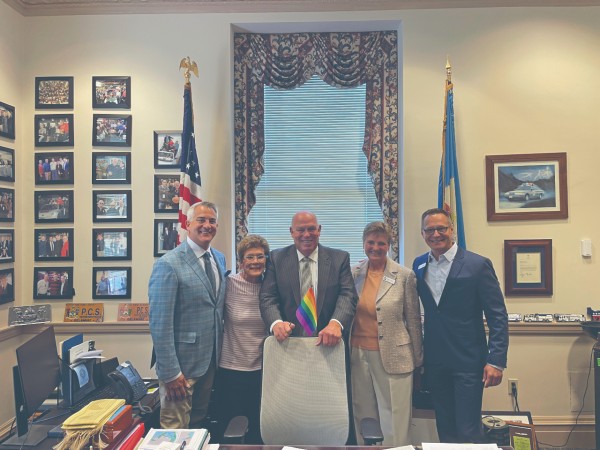 Last November my husband Greg and I officially became Delawareans when we made our Rehoboth home our primary residence. As I have said many times in the past, it is because of CAMP Rehoboth and its 33-year history of Creating A More Positive Rehoboth that made this possible.

In addition to being the “Home of Tax-Free Shopping,” an important benefit of being a Delaware resident is having our vote count at the Federal level, something that was not possible when we lived in Washington, DC. Even the DC license plates reminded me of this fact because the slogan, “Taxation without Representation,” is printed on each one.

That my vote counts became abundantly clear during my first visit to Delaware Legislative Hall located at the state Capital in Dover. I, along with fellow board members Leslie Ledogar, Leslie Sinclair, and Chris Beagle, were among the invited guests who attended the June 9, 2022 signing of a proclamation officially recognizing June as LGBTQ+ Pride Month by Governor John Carney.

I followed Leslie, Chris, and Leslie’s lead as we climbed the stairs on our way to visit Speaker of the House—and great friend of CAMP Rehoboth—Rep. Pete Schwartzkopf. As many of you know, Pete lives in Rehoboth and has been a longtime supporter of CAMP Rehoboth over the years; he was one of the eulogists at Steve Elkins’ celebration of life.

While visiting Pete’s office, we reminded him that CAMP Rehoboth had applied for an appropriation through the State’s Community Reinvestment Fund for Fiscal Year 2023. Pete said he is supportive of our request, even though he does not sit on that subcommittee. Throughout the day, we had the opportunity to spend time with a half-dozen legislators who are on that subcommittee, and each one had nothing but praise for the work of CAMP Rehoboth.

We then headed over to Governor Carney’s office for the proclamation signing and ran into Lt. Governor Bethany Hall-Long. She thanked us for our work as board members, because CAMP Rehoboth’s work in the community is so valued by the State. One program in particular is the HIV testing and education CAMP Rehoboth does in western Sussex County, where IV drug use is a growing problem. The state attributes its ability to get people who test positive quickly into treatment to the outreach conducted by CAMP Rehoboth.

During the ceremony, the Governor invited the LGBTQ caucus to speak: Sen. Sarah McBride, the first transgender state Senator in US history, and openly LGBTQ Reps. Marie Pinkney and Eric Morrison. Each highlighted Delaware’s protections for LGBTQ people in the state Constitution and what a difference these laws make in the lives of LGBTQ Delawareans. The Governor thanked them for their role in making Delaware a place that welcomes everyone and then signed the proclamation.

Given the swift changes happening with recent Supreme Court rulings on gun control and overturning Roe v. Wade, combined with growing efforts in Congress to prevent and undo anti-discrimination protections for LGBTQ people, the new battlefield is on the state and local level. I have a new-found gratitude for the access CAMP Rehoboth has to local and state legislators, as we continue the ongoing fight for equality—especially to ensure a woman’s right to choose remains the law of the state.

Our new Development Manager, Laurie Thompson, celebrated her first day with CAMP Rehoboth on July 5, and we could not be happier. The Board provided Laurie with background information about CAMP Rehoboth’s current fundraising programs to enable her to hit the ground running. With SUNFESTIVAL just around the corner (Labor Day weekend), we look forward to leveraging Laurie’s experience to ensure our biggest fundraiser of the year is a huge success.

With Lisa Evans on board as Interim Director, the Board will now begin mapping out the process to revisit the strategic plan developed just prior to COVID and never implemented. We recognize that many things have changed since then, including the demographics of our region, the needs of our community, and what other organizations exist that may be potential partners to deliver services to address those needs.

The Board remains committed to engaging members of the community to help develop a roadmap for the future. We hope to announce a definitive process in the coming weeks and that we will have a completed strategic plan by the end of November.

The output of the strategic plan defines CAMP Rehoboth’s mission, community needs, what services/supports best meet those needs, and what resources are necessary to achieve goals. Both the process and the resultant plan also will inform the job description of the next Executive Director.▼