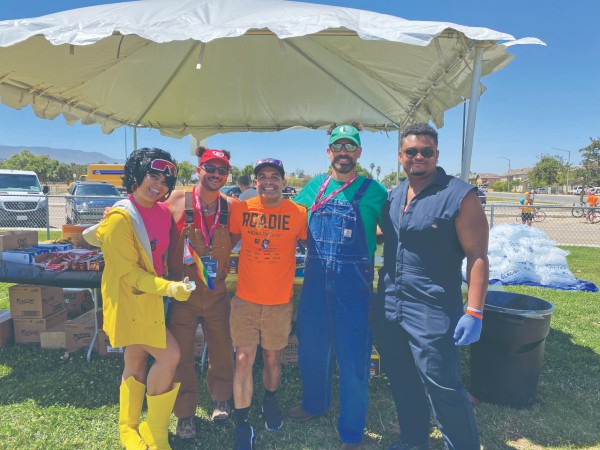 This Is How We Roll

On Sunday, June 5, approximately 3,000 people left the Cow Palace in San Francisco at the beginning of their seven-day, 545-mile journey to Los Angeles. Within that group were 2,400 cyclists (each of whom had to raise a minimum of $3,000 to ride) and 600 roadies. These inspiring individuals, which I am honored and humbled to be a part of, were part of AIDS Lifecycle (ALC) 2022.

Canceled in 2020 and 2021 due to the COVID-19 pandemic, the ALC came roaring back this year raising a staggering $17.7 million. That money will benefit both the San Francisco AIDS Foundation and the Los Angeles Gay and Lesbian Center. The ride itself is a life-changing, week-long experience in a traveling city of 3,000 like-minded individuals, all trying to make a difference in the lives of others.

This was my sixth ALC: three times as a cyclist, and this making my third ride as a roadie. Roadies provide any and all support for the cyclists, getting them safely from camp to camp each night. Different roadie teams include the massage team, sports/chiro, motor safety, information specialists, food services, and the one I was a part of: rest stops.

Rest stops are designated stops along each day’s route for the cyclists to relax, eat, drink, use the restrooms, take photos, and maybe see a quick dance performance. Usually, there are four rest stops each day, each about 15 miles apart, with the lunch stop between rest stops two and three.

On Day 4, my team was the Spice Girls. I was Sporty Spice, after a last-minute outfit change with my teammate Diamond. (The fab Union Flag dress I’d borrowed from my uber-stylish friend Son would not even fit over my leg. I should have realized it beforehand, given Son is a size zero, and I am, well, not.) Gay crisis averted, I donned Diamond’s skintight leopard tights. Diamond is tiny as well, so this Sporty Spice had a little muffin-top through no fault of her own.

The “love bubble”—as it is affectionately known throughout the week—gets from one city to the next via bicycles, trucks, vans, cars, and motorcycles. What exactly is the love bubble? It’s what we call the week we all spend together.

ALC is a massive undertaking and each time I am amazed at how easily and efficiently thousands of people leave camp in the morning and safely get to the new camp at the end of the day. It’s a week-long summer camp where you sleep in tent city, wake up at 4:30 a.m., and don your headlamp as you make your way to the port-a-potty. You get yourself dressed, pack up your tent and luggage, and drop them off at your gear truck, which will be waiting for you when you arrive at the next camp. Roadies are the unsung heroes of the ride.

I think everyone on this ride is a hero. The stories I hear, the people I see…cyclists in their 60s and 70s riding in memory of a child lost to AIDS. My teammate Nora was a roadie, tenting with her queer sister who was a rider. A married couple on their honeymoon riding a tandem bike—the entire 545 miles. HIV+ cyclists proudly riding today in honor and memory of those lost.

A SAG (Support and Gear) bus is available for any riders or roadies who are unable to ride or work at any time throughout the day. One time on the SAG bus I met a man who came out at 52 and has ridden for 10 years, once with his adult son. Sweep vehicles shuttle riders stuck on the route with a flat tire to the next rest stop. These buses and cars are adorned with decorations and messages of inspiration. Two of this year’s sweep teams were the Super Mario Brothers and the Jersey Girls.

The motto of the love bubble is “be whoever you are!” Cyclists ride in creative and fashionable outfits, wigs on the daily, with Day 5 being the beloved Red Dress Day, or its nickname—Dress Red Day. Amid the costumes and the creativity, people go all out. You can even be hetero if you must. ALC is for everyone. Tents are adorned with pride flags and lights. Friendships are solidified quickly. Biking for hours on end will do that.

Dinners at night may include speeches by gay icons like Cleve Jones, or an ALC icon like Lorrie Jean, who retired on June 30. There would be no AIDS Lifecycle without Lorri Jean. The very first ride in 1994 of 500 riders raised $1.5 million and started a revolution.

It is a week unlike any other—a week of highs and lows, of laughs and tears. It’s hard AF but it’s also supremely rewarding. If you get the chance to do it, you will become as much of an ALC groupie as I am. I just hope this column does the love bubble justice. ▼

Robert Dominic splits his time between Brooklyn and Rehoboth Beach. He writes for publications including Instinct Magazine and his own blog, The Gays of Our Lives.