Give Me a Home Where the Buffalo Roam 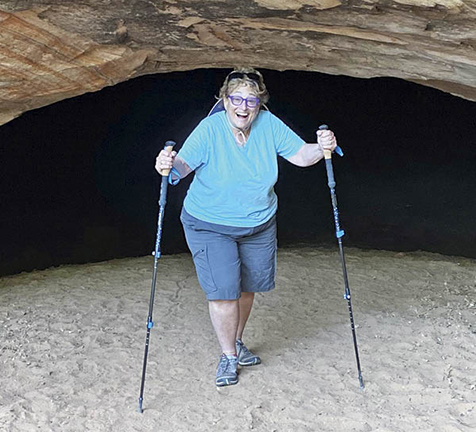 We were seriously out of our element. Four senior lesbians, two RVs, five national parks in Utah.

We just got back to town and the trip was both glorious and brutal, showing us stunning, awe-inspiring scenery while reminding us how many birthdays we’ve all celebrated.

We hiked, off-roaded, climbed trails to canyon rims, gazed down at the magnificence below, trekked through spectacular rock formations, and managed to find the only liquor for sale in 200 miles. It was the trip of a lifetime.

The highs were many, including the altitude of 8,200 feet at Moab, Utah. Hiking, I panted like a schnauzer, gasped for air, and sported a spontaneous nosebleed. I hadn’t been at altitude this high since the second balcony for Hello, Dolly. With my Rehoboth house at seven feet above sea level, I was ill-prepared. We all had varying degrees of hypoxia but charged ahead like the Von Trapps climbing every mountain. The sights, literally, were breathtaking. 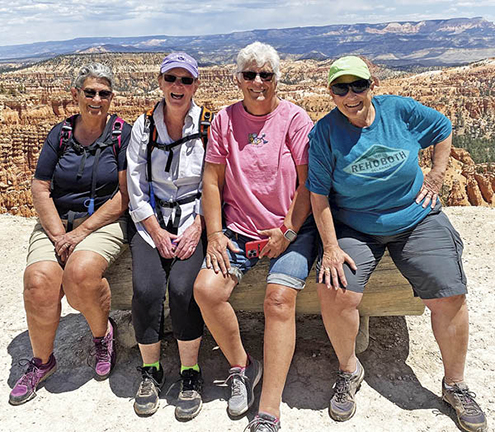 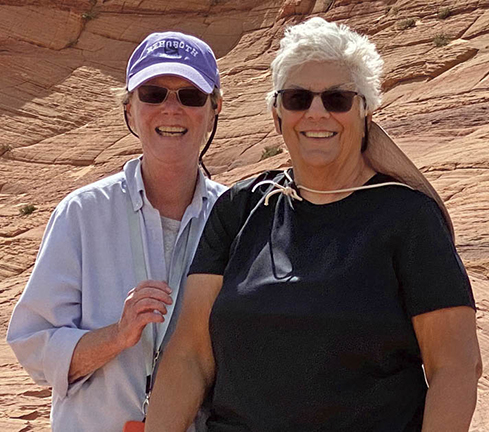 One time we set out on a 0.7-mile hike from Sunrise Point to Sunset Point (very Fiddler on the Roof) in Bryce Canyon. Somehow, we missed the little trail exit sign at 0.7 and trudged another mile and a half, straight up, still seeking direction signs to the park shuttle. “Look for signs for the named trails,” somebody sputtered. I hoped for one saying Urgent Care.

You had to see me and Bonnie, Kathy Wiz and Muriel Hogan, in hiking shoes, floppy hats, and trekking poles plus backpacks with built-in water bladders so we could suck on tepid liquid to hydrate us as we slogged. And the wonders we saw thrilled us—acres of majestic rock formations, spires, pinnacles, arches, and towering hoodoos (spindly rock towers reaching up to the sky) as well as mesas, buttes, and deep canyon walls. We saw where Butch Cassidy hid out. It was all stunning. Possibly life changing.

Wildlife sightings were few, as animals generally appear at dusk, by which time we were thoroughly exhausted and back at our RVs, hot dogs on the grill, hard-to-find liquor in red Solo cups, and ready for bed. Sometimes we skipped dinner, too pooped to chew.

We did see some marmots (chipmunk-like), free-range cattle, grazing buffalo, and prairie dogs—popping up and down from their desert homes like the Whack-a-Mole machine at Funland. I was thrilled for my wife and our companions who chose to scale a ridiculously steep incline and walk an unstable swinging suspension bridge to go ziplining, enduring six different half-mile zips over the canyons. They pronounced it the most strenuous and exhilarating thing they’d ever accomplished. They were proud of themselves and I was proud of them. And relieved to have hunkered down in the RV, dodging the zipline and counting my blessings they didn’t insist I join them. 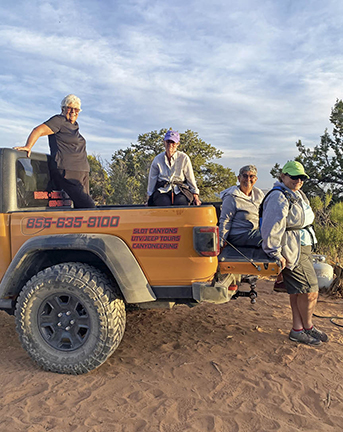 I have to say, we did not see a whole lot of gay people on our journey. I’m sure they were sprinkled about, but like us, incognito. While waiting for a park shuttle one day, a woman looked at the four of us and exclaimed “How nice that you left your husbands at home!” We just smiled and punted.

Another day, a Saturday Night Live church lady said, “Are you sisters traveling together?” We exchanged glances and thought about clarifying the statement but she babbled on about traveling with her sisters and luckily left us no opening.

We did fess up when a group of 20-something guys and gals on a tour bus started a conversation and, surmising our ages, said they wanted to be like us when they grew up. We were flattered, I think. Then, they asked how we knew each other.

Kathy, the bravest among us gestured toward Muriel and said “Actually, she’s my wife, and we’ve been together 30 years.” I added that Bonnie and I just had our 40th anniversary. Those kids couldn’t have been nicer or happier for us and it was a delightful conversation. A couple of others on the bus may have suffered the vapors, but we didn’t look.

When we went off-roading, our guide, Tyrone, was very chatty, knowledgeable, and lots of fun. He took us on a thrilling but harrowing UTV tour (that’s Ultra Terrain Vehicle, way more adventurous than the lowly All-Terrain Vehicle). He skillfully kept us from plunging over the canyon edge like Thelma and Louise. On the way back down he pointed out a John Deere tractor by the side of the road. “You gals wanna get out and take selfies with it?” he asked. Methinks he might have had a clue.

So we’re home, having learned a lot.
1. If the guidebook says the hike is short, it’s dreadfully steep. If it says it’s flat, it’s dangerously long.
2. If all the folks who said they were proud of us for doing this excursion at our ages were laid end to end the line would still not reach the closest Utah liquor store.
3. Driving along arid, windy byways, it’s best not to exclaim “Wow” about the scenery just as a sand storm approaches.
4. We made a good investment in sunscreen lip balm, keeping us from looking like Goldie Hawn in Death Becomes Her.
5. We loved experiencing this journey. It was inspiring, amazing, mind-blowing, and thrilling. I loved it. We recommend you doing the same—but before you have too many more birthdays.
Bonnie is outside right now taking the hose to her hiking shoes. I’m taking a flame-thrower to mine. Kidding. I think. ▼