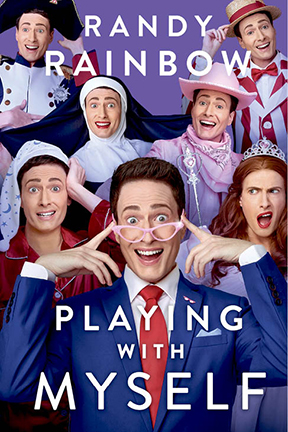 It takes two to tango.

And foxtrot, and waltz, and polka, for that matter. You might dance in a circle with other couples but those are couples, remember, not lines of people boot-scootin’. No, it takes two to tango and spaghetti kiss and to sing a duet but, as in the new book, Playing with Myself, by Randy Rainbow, it just takes one to podcast.

People ask Randy Rainbow all the time if his last name is real. Yes, it is, he writes with glee, and it’s one of the best things his father ever gave him. Because, seriously, could there be a more fitting name for a gay “topical comedian”?

Being in the limelight has always been in Rainbow’s blood: he recalls staging a Disney play for neighborhood parents when he was very young. He was the lead actor, the director, the stage manager, and the costumer. His playmates were rather less-than-enthusiastic but the parents applauded, and Rainbow was hooked.

It probably helped that his mother was a big Broadway fan and so Rainbow grew up with show tunes. As an adolescent, he collected soundtrack CDs and, after he was introduced to “a form of religion that was...Barbra Streisand,” he collected videos of certain performances he grew to love best.

Also as an adolescent, he grew awkward. His other religion was crunchy snacks and he spent a lot of time in his room; his parents had moved the family from New York to Florida; their marriage was in shreds, and it took awhile for Rainbow to get his confidence back. It wasn’t until he was in high school that he found that old rhythm, his scathing sense of humor, and a cadre of like-minded theater-and-drama friends.

After graduation, Rainbow returned to New York, where he ultimately found his community and sharpened his talent. Restaurants and clubs kept the lights on while he was learning to monetize the podcasts he was making, when an agent told him that he was “still a nobody!”

You didn’t really think Playing with Myself would be as hilarious as author Randy Rainbow’s videos, did you?  Yes, this book’s funny but alas, not quite as LOL as his parodies.

You probably won’t mind, though: Rainbow’s biography is still plenty entertaining, nonetheless. From his first pair of Ruby shoes to the shoo-off he jokingly gives readers at the end, we get a peek at how he gained what he admits is “an encyclopedic knowledge of Broadway musicals,” how his sense of humor was honed, and how that all led to a library of YouTube bits that roast those in the news. Politicians seem to be special targets for Rainbow—not surprisingly, as you’ll see here—but anyone’s fair game for the needling.

Playing with Myself is slightly bruised by an overdose of name-dropping, the presence of which may surprise nobody. Still, if you don’t hate on that and you love a little faux-pearl-clutching, this book is too good to pass up. ▼