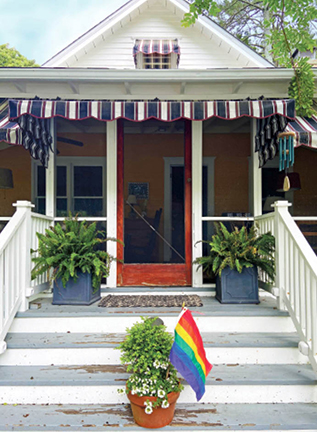 I recently purchased my first rainbow flag. Up until now, I’ve never had much desire for one. Why did I need to advertise when I’ve been living an openly gay life since the 1980s? If I’m being honest, I’d have to say I’ve always felt it a tad brash, something for those more flamboyant or activist members of the LGBTQ community. I know that sounds quite snobby, but I assure you I’m not the only one with that opinion.

So why the change? When I saw the live and print images of all the crazies waving their Trump flags, Confederate battle colors, and white nationalist banners at the failed January 6 coup d’état, I was shocked and repulsed. I still am whenever I see one of those blue Trump flags waving on a pole or on the back of a pickup truck.

Alternatively, all the blue and yellow Ukrainian flags that proliferated everywhere this year speak to unity, hope, and support for the forces of good. In both cases, I am reminded of the powerful symbolism inherent in these simple squares of fabric. And it got me wondering if it might be time for me to reconsider the rainbow flag.

The rainbow flag was created by Gilbert Baker of San Francisco in 1978. Baker, an Army veteran and local drag queen, was well-known in the city for his creativity in designing costumes and political banners. City Supervisor Harvey Milk approached his friend Baker about creating a new symbol for the gay and lesbian community to be debuted at San Francisco’s Gay Freedom Day celebration in June of that summer.

Up until then, the gay community used the pink triangle, a symbol of persecution the Nazis assigned to homosexuals, as a rallying sign. Baker landed on the rainbow because it was beautiful and natural, its colors representing the diversity of the gay community. It was bold and it made a statement, which the gay movement was all about in those days. This is who I am, no longer hidden away in a closet. It was a new image for a new movement.

The flag’s design did not, as some have argued, come about because of the rainbow’s link to actress Judy Garland, a gay icon. Gay men, some readers will remember, were occasionally called “friends of Dorothy,” in reference to Garland’s role in the movie The Wizard of Oz and her iconic version of the song “Somewhere Over the Rainbow.” When the Museum of Modern Art acquired a rainbow flag for its permanent collection in 2015, Baker said in an interview he was inspired primarily by the American flag and the abstract expressionist work of artist Jasper Johns.

Baker assigned symbolic meaning to each of the flag’s eight colored stripes. Pink represented sexuality. Red was for life, orange for healing, yellow for the sunlight, green for nature, turquoise for art and magic, blue for serenity, and purple for spirit. The original flag—actually, two were produced—measured 30 feet by 60 feet. Each stripe was hand-stitched and dyed by an army of 30 volunteers in the upstairs attic of the local gay community center. It was an immediate hit when unveiled. A year later, the pink and turquoise stripes were removed, and the six-stripe flag became the standard.

Baker, who refused to apply for a trademark for his flag design, died in 2017, the same year the City of Philadelphia unveiled a new rainbow flag with black and brown stripes, added to better reflect the racial diversity of the LBGTQ community. More recently, Daniel Quasar, a designer in Portland, Oregon, proposed an even more inclusive design. Called the Progress Pride flag, it adds pink, light blue, and white stripes from the transgender pride flag and keeps the black and brown ones from the Philadelphia version. These new colors are presented in an inverted chevron against the classic six-stripe rainbow standard. I get what this new interpretation is saying, but from an aesthetic point of view—very important for flags—it’s not a particularly noteworthy design.

Today, there are numerous rainbow flags reflecting many identities that fall under the umbrella of the LGBTQ community. It’s hard to keep them all straight (pun intended). But one thing remains constant and that’s change. And in a world of increasing violence, negativity, and polarization, there’s something hopeful and uplifting about the rainbow flag, even more so when you understand its history.

Though I doubt I’ll ever become a full-fledged flag queen, I did plant my 11” x 18” six-striped rainbow flag in a terracotta pot alongside an American boxwood and placed it right in the middle of my front porch steps. Okay, it’s not the boldest statement, but it does make a statement—in an understated way…. ▼