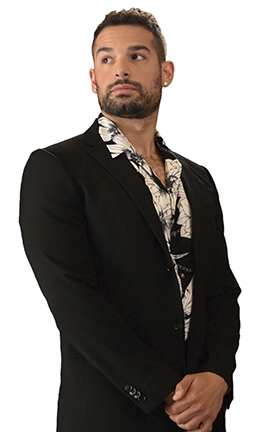 If you think you’ve heard the name Johnny Sibilly, you have. Or at the very least you’ve seen him, whether on FX’s groundbreaking trans-focused series Pose, where the 34-year-old actor had a three-episode stint as Costas Perez, or on HBO’s Hacks, appearing alongside Jean Smart in one of last year’s best new shows. That series is currently in its second season (and still just as deliciously queer).

But the show guaranteed to give Sibilly’s profile a generous boost is his role on the reboot of Queer as Folk, where he plays Noah, a smoke-and-mirrors lawyer. Groundbreaking when it premiered in the UK in 1999 and then in the US in 2000, the show was one of the more authentic representations of LGBTQ+ life when it premiered. Peacock’s new Queer as Folk understands what the show was then and what, in 2022, it has to be now.

But this self-proclaimed “reimagining” also knows that being a queer person in our modern day means, in some ways, what it did in 2000: homophobia, fear, and acts of anti-queer violence so horrific they hurt your heart. The trailer doesn’t hide the fact that the first episode is a hard, gutting, and emotional watch: reminiscent of the Pulse nightclub tragedy in 2016, there’s a shooting at Babylon, the local gay club.

Chris Azzopardi: How have you been doing? You’ve been really busy.

Johnny Sibilly: Yeah. With the pandemic and everything, and being so busy, it’s been truly a blessing. I’m so happy to be working and to be doing this.

CR: During the beginning of the pandemic, were you afraid of work drying up?

JS: At the beginning of the pandemic, it was like, “Ha, now the rest of the world knows what it feels like to be an actor or an artist, where your job isn’t guaranteed.” And then, after a while, it was like, “Oh, wait. OK. What’s going on?” But then, I got the call for Hacks, the first season, and I was like, “Oh, yes. Yes, we’ll do this.” [I filmed] that in the height of the pandemic, and then Queer as Folk when things were tapering down.
CR: It sounds like the producers of Hacks just called you. Or Jean Smart personally called you.

JS: [Laughs.] She’s like, “I don’t know who you are, but I think you’d be great.” Yeah, no. I auditioned for it, but it was a Sunday night [when] I got a call asking for my availability, and they asked if I could put something on tape that night to film on Wednesday that week. And then, we got a call on Monday that said I got it. It was pretty quick. Queer as Folk, not as much….

CR: What was the process for Queer as Folk?

JS: For Queer as Folk, for me, the process in my head started when I found out that there was going to be a reboot made. Back in 2018…

Flash-forward to the actual thing getting launched and the auditions happening, and I was like, “I got to be a part of this somehow.” The audition came through, and it was that same thing, where you audition, and then you get the call back, and then you do the chemistry session. But it’s a month to two months of your time just waiting to know.

CR: When I watched Queer as Folk as a teenager, the big draw for me then, as a closeted gay kid, was watching guys on screen have sex. And clearly, that’s still a big part of the show. Is gauging sexual chemistry an important part of the audition process? 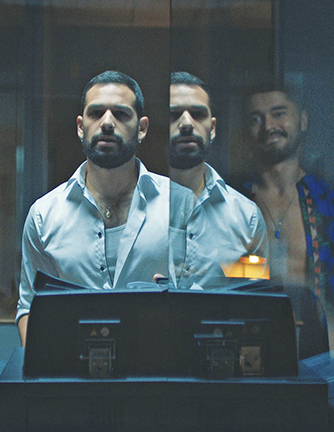 JS: The sexual chemistry, not so much. My only chemistry read was with Devin [Way], who plays Brodie. And it’s funny, because when I saw him pop on the screen, I was like, “That’s him. That’s the one,” whereas he did a couple of chemistry reads with a couple different Noahs. But it is interesting, because we were doing it on Zoom, too, so you’re not in the room. You don’t feel the vibes of what it would feel like. But it clicked with Devin and me.

CR: What has it been like to be a part of Hacks knowing that it treats its queer characters so matter-of-factly?

JS: It’s a dream, because the show itself is very much queer-coded, in that there’s a strong female character that is rich. So many things that we grew up loving [about] strong female characters, and then to add in the queer characters, not only the ones that worked with her, but just peppering the universe of Hacks with these characters was super exciting and important. I love that this show feels like a reflection of what the world looks like.

JS: Pose was my first big thing. It’s so nice that my first big series regular role is also another queer show, because a lot of times, as queer actors, people are like, “Oh, I don’t know if I want to pigeonhole myself….” And I’m just like, “Oh, thank god we have more opportunities to play gay characters.”

CR: It seems like you might be happy playing queer roles for the rest of your acting career.

CR: I always think, when I interview a queer actor who plays queer roles, what it must be like to connect with your younger self, thinking, “What would this have meant to 14-year-old Johnny?” Do you ever think that way?

JS: All the time.

JS: I was watching Heartstopper, and I just had a moment where I had to pause it, and I was like, “Wow, if I would’ve had this as a kid....” Because it is also a very child-friendly show about sexuality. I can only hope that, by me being on-screen, whoever is watching can be like, “Oh, yeah. I’m absolutely unafraid to be myself after this.”

CR: Did you watch the original Queer as Folk growing up?

JS: I watched it in hiding. I wasn’t an avid, weekly watcher when it was on Showtime, or before, when it was on in the UK. But I did go back and watch a lot of it after the fact in 2018, when I found out it was getting rebooted.

CR: What were the conversations you had with the cast and crew about how to honor the show’s legacy while also moving the needle forward?

CR: Even now when I see queer sex on screen, I’m still marveling at the fact that it exists. What was it like knowing that you were signing up for a show that would mean that sex was pivotal?

JS: You see “nudity required” in the breakdown for the audition, and as an actor, I think it’s important for me to push myself and move out of my comfort zone, but I also think it’s important that we tell authentic queer stories, and queer people have sex in those stories, just like if we were to watch Euphoria or any other show on TV that has cis, heterosexual people.

CR: As you know, the whole show is centered on a Pulse-like shooting at Babylon. And for me, admittedly, it was really hard to watch, though I have a real understanding that it’s dealing with trauma and working through that. What did it feel like when you got to that part in the script?

JS: I remember when I first read the pilot, I was shocked. I was like, “Oh my god, I did not know that this is where we are going.” And then, the more I thought about it, the more I thought how important it was to show something like that. I think there is a responsibility for us as queer people to acknowledge the things that our community has been through, whether it be HIV/AIDS or all of the [other] things our community has been victim to.

I also think it’s super important that we show stuff like that now because we are still undergoing a lot of fire from not only legislation, but bars getting broken into and potentially burned down. We are under attack, and I think it’s important that, while we celebrate a lot of queer representation, we also take a moment to understand where we still are in this time.

I really am grateful to the creators for creating space for this story, and not only in a way that shows the tragedy as it is, but also makes it about so much more than the tragedy: makes it how queer people are incredibly resilient and come together in times of strife, as we always have and always will. ▼