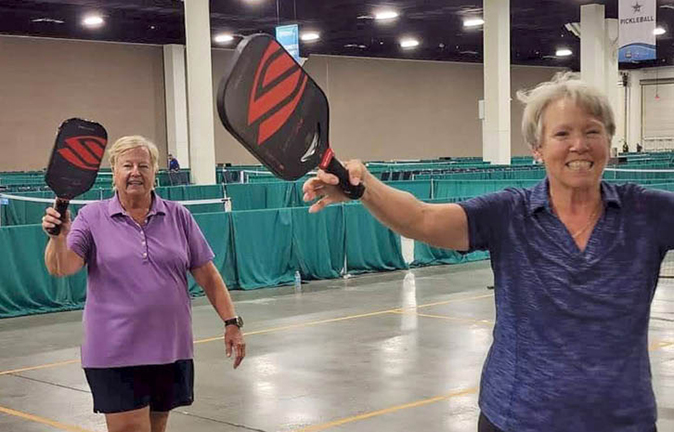 Our Senior Athletes Go to the Nationals

We senior gals love our games.

So it was only natural that a whole contingent of female athletes from Sussex County traveled to Ft. Lauderdale, Florida, in May to compete in the games presented by the National Senior Games Association.

There, they met on the courts, courses, and diamonds, meeting other senior athletes ranging in age from 50 to 103 from all over the country. To play in the Nationals, an athlete must be at least 50 years old and have qualified by competing and meeting a certain standard in National-sanctioned state games. 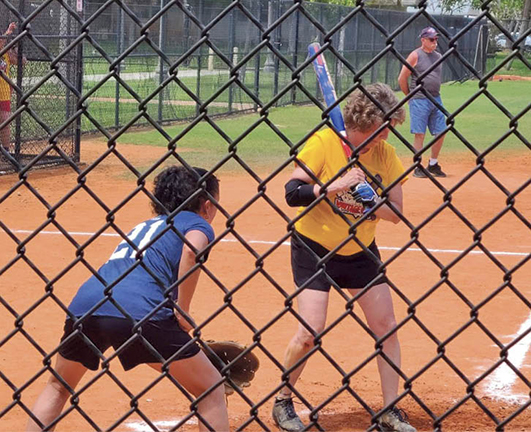 The event’s opening parade and ceremonies took place at the Las Olas Promenade, a beautiful place for local pickleball maven Sandy Oropel and Blue Heron Softball team member Bonnie Strang to have the honor of walking in with the Delaware flag.

“I felt so special walking in as Delaware was called and they announced ‘Sandy Oropel, age 78, playing pickleball and golf.’”

There were 162 athletes from Delaware and more than 30 from our area. Both male and female athletes made up our contingent and I wish I had room to report on everything.

Our local Blue Herons softball team took to the field accompanied by team founder and manager Sharon Kantor. Together since 2014, the team won first place in the Delaware Senior Games last summer, sending them to the Nationals to play. “This was our first time playing on a national level,“ Kantor said, “and we were so happy to be there.”

While many on the team are in their 60s and 70s, there are some 50-year-olds, requiring them to play teams in the younger bracket. They won some and lost some, Kantor said, “and in some cases we were clearly out of our league—no pun intended.” The team faced women who had been playing as a team for 30 years, many in climates where they could play softball all year long.

“We talked about going to the Nationals a few years ago,” said player Maria Marchegiano, “but didn’t think we were ready. This time, playing against such stiff competition was humbling, but we did well. And playing so many games in four days made us realize we were not in our teens or twenties anymore. But it was a great experience.” 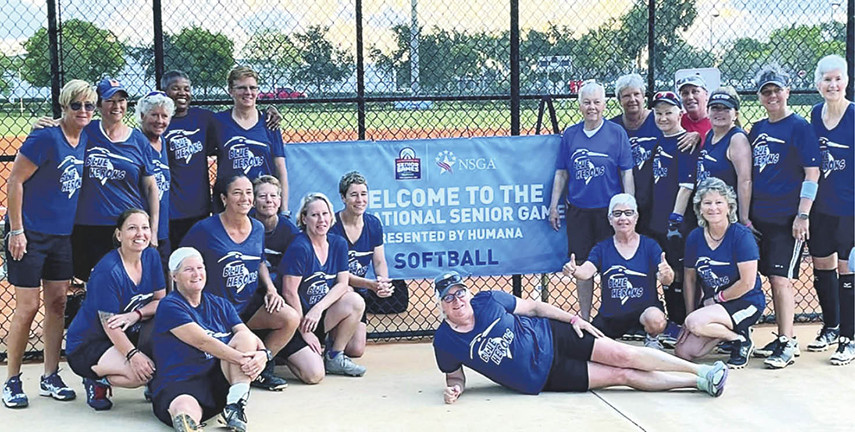 Marchegiano also expressed gratitude to team sponsor Nicola’s Pizza. “We have to give them a shout-out for being so generous and providing their amazing support.”

The Blue Herons wound up thriving, playing in both the Winner’s Bracket and the Double-Elimination Bracket, playing teams from Wisconsin (“they kicked our ass,” Kantor admits) and winning twice against a team from South Dakota.

Also playing in the games was Rehoboth’s Softball Rebels, joined by members of Rehoboth’s Alley Cats. I hope to have more on them at another time.

Side line photographer Alicia Mickenberg, who was accompanying her spouse, Heron’s softballer Kathleen Fitzgerald, said the whole experience was “great fun and awesome spring training for the coming summer.”

The Delaware athletes included nine or 10 golfers who went to the games; they qualified by winning first place in their age brackets in the Delaware Senior Games. Linda Kauffman reports playing a very long round in 90-degree heat on the first day.

“It was a grueling day on the course, with very slow play and a storm delay making the whole thing almost seven hours. The rest of the days were similar. We’d wake up, have breakfast, play a long, long round of golf, eat, drink, and laugh together afterward, go to sleep. Repeat.”

Kauffman did say she met her two goals: she was not disqualified and did not come in dead last. Rumor has it that the golfers shared the course with some on-looking iguanas perched in trees, and the athletes worked hard not to have their shots land near the reptiles.

And of course, it would not be a Rehoboth women’s sports article without mention of pickleball. Sandy Oropel and Sandy Sullivan took 7th place in their age group in a fierce pickleball match-up. Pickleball players included Karen Gustafson, Kathy Casey, Rina Pellegrini, Jean Burgess, and many more. 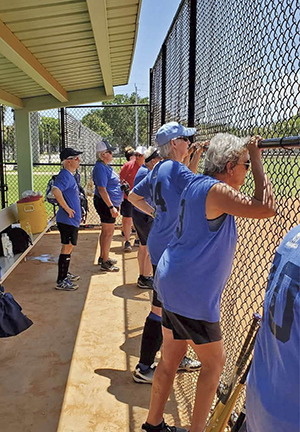 Deadline precludes my talking to everybody, and I’m sure I’ve missed mentioning lots of athletes’ names, but congratulations to you all for “going national.” From all reports this was a spectacular experience for our hometown athletes. It would not be a surprise to see many of them qualifying for a trip to Pittsburgh in 2023 for the next National Senior Games. ▼