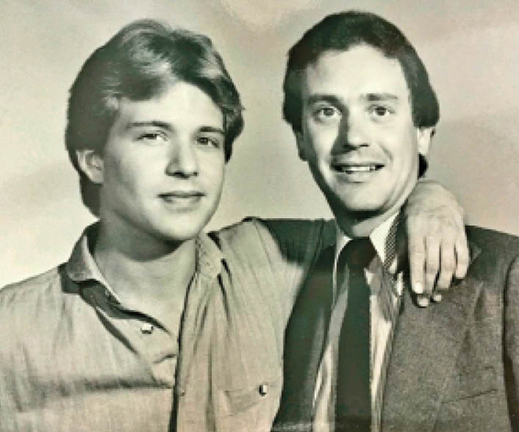 In previous columns I have mentioned upcoming drama and turmoil; now, it’s time to introduce you to “the Berthas.” It’ll help to keep some important things in mind as we get to those introductions.

In the 80s, many members of Rehoboth’s city hall and Rehoboth’s homeowners’ association were attempting to combat the “gay problem” they felt was infecting their city. They came up with a dimwitted slogan—Keep Rehoboth a Family Town—and attempted to spread the message with signage, bumper stickers, and even at city and association meetings.

Bertha Pusey, whose home was located basically across the street from today’s CAMP Rehoboth and Elkins-Archibald Atrium, was just about the loudest and most recognizable member of the growing opposition to the downtown gay community. (I had to mention the atrium not only because it is an extremely well-deserved honor for Murray and Steve, but also because those guys are very relevant to our story.)

Although Bertha was a real person, the Berthas is a name I made up. Technically not an organized group, the Berthas is a descriptive term I use for those citizens of Rehoboth, in the 80s and 90s, who couldn’t believe that a gay person could have or be part of a family.

In the 1980s, the gay community was struck with the deadly virus HIV/AIDS, and no one understood it yet. It seemed to be targeting gay men, but before any real evidence could be presented, the general population very quickly demonized gay men. They named it GRID, Gay-Related Immune Deficiency, or Gay Cancer. We can all relate to this awful labeling, given our experience of the COVID epidemic. Remember “the China virus” and “Kung Flu,” names made famous by a strange orange man?

The religious were quick to point out that this pandemic must be a direct punishment from God himself. People were scared of the HIV virus, but seemingly just as afraid of gay men. Gay men were also terrified, starting to even fear each other.

Again, just like during COVID, they spread a lot of bad information among themselves. During COVID, not all of us wanted to wear a mask or get a vax. And at the outset of the HIV/AIDS epidemic, gay men didn’t want to stop being gay or doing the things gays tend to do. It’s easier to believe a lie that doesn’t require you to change anything in your life, than it is to accept a truth that requires sacrifice.

As I studied the HIV/AIDs pandemic—during the COVID pandemic—and watched us make the same exact mistakes all over again…well, it left me muttering to myself about my faith in humanity.

As gay men were being shunned by their community, they were also often being abandoned by their families. They became rightfully fearful that they could lose their jobs, homes, health, and even their lives. Many men were so afraid of being outed or infected they would end up in solitude, and without any support.

The beliefs and rules they had abandoned in the 70s were now being used as fuel for intense guilt and depression. Nonetheless, some still found comfort in perceived sanctuaries like Rehoboth Beach. Only to have the Berthas rally against them.

Peter Pizzolongo shared with me his experience with a Bertha in Rehoboth during these times (1980s):

“I was with my DC group of friends, Black and white; we rented a house on Hickman [Street]. When we came home from the Renegade one night, this paper towel was taped to our front door: ‘Gays, AIDS, and Blacks Get Out of Rehoboth!’ Daunting, but it didn’t keep us from returning several times each summer....”

The Berthas were not an organized group, but their fears infiltrated the city of Rehoboth. Times of fun and sanctuary were evolving into misunderstanding, non-acceptance, and unjustified hatred. Gay businesses seemed to be getting squeezed out of existence with unfair city rulings and ordinances directly targeting them.

Just as it seemed all hope would be lost…the incredible gay universe delivered to Rehoboth the very best and most qualified two people possible. Both came from strong religious backgrounds. One worked in the Carter administration and had a deep understanding of politics and law. The other was an amazing artist with serious smarts and a lot of love. They embodied the knowledge and skills to take on the Berthas in a totally new and unexpected way.

Next article, we can really start to appreciate why Steve Elkins and Murray Archibald now have a community building named for and dedicated to them in downtown Rehoboth. I can’t wait to tell you about my favorite superheroes! ▼