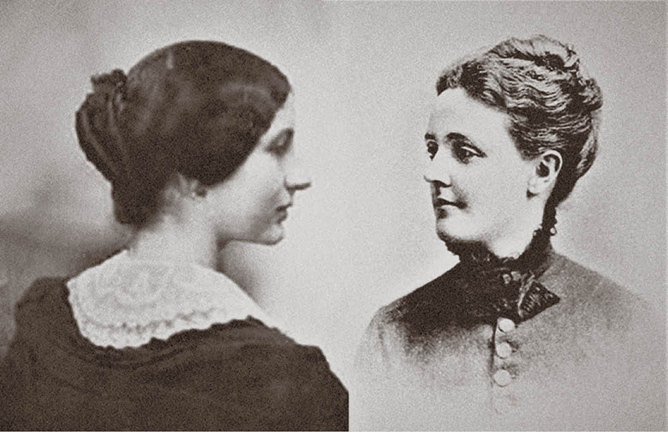 Weddings were conducted, champagne poured, honeymoon pictures were posted all over Facebook, Instagram, and Twitter. Love conquered—well, if not all, it certainly enjoyed a successful invasion of social media.

Even for those of us who were still un-partnered, the triumph of marriage equality brought joy. In the eyes of the law, and a sizeable number of Americans, we were no longer oddities who lived and loved outside the law. We were now, well, people.

For decades, centuries even, same sex companions had already been living in domestic relationships; married, for all intents and purposes. Those marriages, though, could never be officially acknowledged, at least not outside a small circle of trusted friends. Among late nineteenth-century women, these domestic relationships were known as Boston marriages, a term attributed to Henry James’s 1886 novel The Bostonians.

Though James didn’t use the term in his book, the story features a domestic relationship between two women. Thus, the term Boston marriage was subsequently embraced to describe these real-life relationships.
According to numerous sources, among them friends and acquaintances of James as well as later scholars, James based the fictional couple in The Bostonians on two very real women of his acquaintance: Annie Fields and Sarah Orne Jewett. Like many of the women in Boston marriages, Fields and Jewett were educated, relatively financially secure, and had careers of their own.

Of the two, Annie Fields travelled the era’s more usual route to her relationship with another woman. She’d married poet, editor, and publisher James T. Fields in 1854. The marriage, by all accounts a happy one, lasted until his death in 1881. During their union, Annie gained a reputation not only as the charming hostess expected of the wife of a prominent literary man, but as a talented literary figure in her own right.

Through her husband, she met and befriended a number of important literary personages: Henry Wadsworth Longfellow, Willa Cather, Mark Twain, and Oliver Wendell Holmes, Sr., among others. But Annie earned their friendship and respect independently of her husband for her sharp literary instincts. She was instrumental in bringing Emma Lazarus’s poetry into publication, wrote a biography of Harriet Beecher Stowe, a biography of Nathaniel Hawthorne, edited the collection of letters of James Greenleaf Whittier, and wrote numerous essays.

Unlike Fields, Jewett never married but instead had a series of relationships with women. Her writings often referred to these liaisons; certainly in her novel Deephaven, published in 1877, and “Martha’s Lady,” a short story. Jewett, as a literary light, was of course part of the intellectual circle around Annie and James Fields. After Field’s death in 1881, the widowed Annie eventually entered into a relationship with Sarah. The two remained together until Jewett’s death in 1909.

Their life together was a rich brew of literary gatherings and travel, and of course writing. When not traveling, the couple shared homes in Boston and in Maine. The most prominent literary and cultural figures of the day were frequent visitors to the Fields/Jewett residences, where the conversation was lively, indeed.

The couple’s affection was evident in their nicknames for each other: Fuff for Fields, Pinney Lawson for Jewett, as expressed in one of Jewett’s poetic love notes to Annie:

Good night, dear dear Fuff—if you could only dream how I want to see you!
Your own PL

Though Fields and Jewett’s relationship was accepted by many in their literary and cultural milieu, the women did not entirely escape the slings and arrows of the time; for though Henry James based his characters of Olive Chancellor and Verna Tarrant on Fields and Jewett, a great deal of The Bostonians is a satire on the mores and social practices among well-off, educated, and socially independent Boston women. The novel reflects James’s ambiguity about—some would even say disapproval of—the new independence of women afforded by the Industrial Revolution’s opportunities for work, education, and socializing outside the traditional family. The novel, therefore, does not treat Olive and Verna especially kindly.

But no matter. Whether Henry James liked it or not, his novel gave a name to the loving relationships between women: Boston marriages. And the real-life inspiration for his female characters, Annie Fields and Sarah Orne Jewett, did indeed live a married life. They, and other Boston marriage couples of the nineteenth and early twentieth centuries—notably Sarah Ponsonby and Lady Eleanor Butler (The Ladies of Llangollen), Katherine Coman and Katherine Lee Bates, Charlotte Cushman and Matilda Hays, among scores of others—set the path which led to the twenty-first century triumph of marriage equality.

And so, for those of you who are enjoying marital bliss, when your own anniversaries come around, raise your glass in toast to Annie Fields and Sarah Orne Jewett: “Here’s to you, Fuff and Pinney Lawson!” ▼