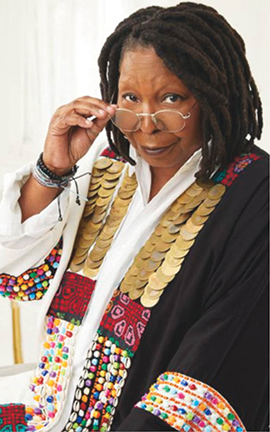 On-screen she has made our hearts ache (and soar) as Miss Celie in The Color Purple, and helped us fall in love with love as Oda Mae Brown in Ghost. But what the LGBTQ community truly adores about Whoopi Goldberg is her strong passion for equality and her demand for what is right.

I was honored to sit down with Whoopi Goldberg for a chat about her passion for the LGBTQ community, and why following the “bright light” of Elizabeth Taylor was a natural step in her advocacy work.

Michael Cook: The LGBTQ community has such a reverence for you, but it is most definitely a mutual love affair. Where does it begin for you?

Whoopi Goldberg: I think it began when I was a little kid. I always knew—they used to be called “uncles.” You had uncles who you knew were never going to get married, and you knew it, but you didn’t know what it really meant because you were a little kid. They were people you loved and who looked out for you. And my dad was gay; it’s always been part of my life.

Mc: So much of what you have done throughout your own career has become so much of the fabric of what the LGBTQ community loves. Do you look back on your storied career and wonder how that all happened?

WG: I just got lucky, I guess. For me, the characters that I have played have always been a little bit different from the mainstream, so their ideas were different. They did things differently and they were smart in the way that they executed things. When you look at Miss Celie from The Color Purple and her going into creating those pants and all of the clothing…. And you look at The Associate—in order to make life better, she had to come to a decision that I think a lot of people have worked with over the course of their lives: “How do I explain to you that I am as good as you are, I am as smart as you are? I have to show you what you want to see, and then I can show you what I want you to see.”

Mc: You have protested against California’s Proposition 8 and your work with the Elizabeth Taylor AIDS Foundation is truly a huge part of your own legacy and life’s work. National attention came to it when you were given the Elizabeth Taylor Legacy Award on The View in 2017. While your relationship with Elizabeth Taylor may have been part of the impetus for you getting involved in the organization, is it fair to say it’s a passion of your own as well?

WG: That, and the fact that I lived in San Francisco. AIDS raised its ugly face. I saw what other people did to other people. Human beings putting other human beings out when they were sick, leaving people on the streets, having to go around and collect people and get them to someplace safe. When Elizabeth (Taylor) said that she was trying to get people to do this benefit for her, it was a no-brainer for me. A lot of other people came and were doing amazing things, but she came along and kicked the door open and said, “my friends are getting ill and I want to be there, I want to help raise money.” And what can you do, besides stand beside a bright light that says, “we can do better”?

Mc: Coming from San Francisco and seeing the lives we lost in the 80s and now seeing the community being a vibrant, active, and bright part of America’s fabric—it must be absolutely surreal for you.

WG: For me, it comes with a codicil, because I also know that we are not done. We are now fighting for shit we have already fought for and won. Now we are starting to see a slide backwards because we are in the throes of a nation that has lost its mind. We are fighting for ourselves as human beings, for our dignity as people of color, as women, as gay men, straight men, gay women, straight women—we’re all in the fight.

Michael Cook has been a part-time resident of Rehoboth Beach for over a decade. He is currently a contributor to Instinct Magazine, World of Wonder’s WOW Report, and South Florida Gay News. Photo: courtesy of ABC/Robert Ascroft.