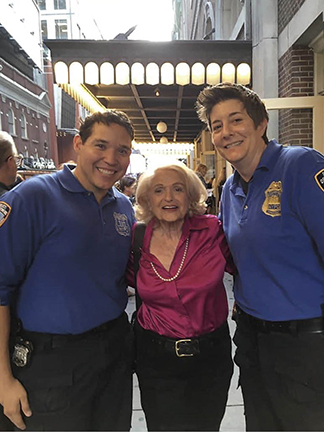 No Police in Parade? Shame!

Yes, I thought I retired my opinion column. But a news article at the end of May punched me in the gut and sent me flying to the computer to speak out.

According to news reports, the governing body for the New York Pride Parade has banned police participation because “The sense of safety that law enforcement is meant to provide can instead be threatening, and at times dangerous, to those in our community who are most often targeted with excessive force and/or without reason.”

Look, we all know, and have seen video of very bad apples among law enforcement. And yes, we are in an era where Black lives certainly matter, transgender lives need the support of us all, and many other issues can cast a bad light on some law enforcement officers and departments.

But good God, let’s not throw out the baby with the dirty bathwater.

I remember years of attendance at the very New York City Pride Parade which now bans police from marching. I remember the thrill I felt years ago seeing the Police Marching Band participating for the first time.

I remember 2013 and the bank of gay police officers gleefully accompanying Parade Marshall Edie Windsor the year she won her marriage equality case in the Supreme Court.

One year I found myself standing beside club legend Rollerena, who began skating on Christopher Street in the 1970s and who was now a senior drag queen still on roller skates. She was having trouble negotiating the busy street when a police officer politely asked some marchers to make room for her, so she would not get hurt.

I remember New York’s massive 50th Anniversary of Stonewall Parade, which turned into a gigantic international pride celebration, flooding the streets of lower Manhattan with literally millions of people and tons of rainbow gear. And I saw the thousands of police officers keeping the peace and helping clear the intersections as the deluge of people traversed the crowded streets and sidewalks. I loved seeing some of the officers cheering us on, smiling, waving, enjoying their responsibility to keep us all safe.

There was no them and us. I saw no incidents of disrespect. There might have been some incidents in a crowd that large, but we read no reports of trouble.

But closer to home, who reading this column can remember 25-30 years ago in Rehoboth? That’s when Steve Elkins and the fledgling CAMP Rehoboth met with Rehoboth Police to forge a new era of cooperation in fighting boardwalk gay bashings and discrimination.

Who else remembers former Police Chief Creig Doyle and current Police Chief Keith Banks insisting on sensitivity training for their officers? It was a job that started as a chore for both CAMP Rehoboth staff and the officers. It turned into a warm, friendly session of ideas exchanged and friends made.

Who reading this recalls years and years of Rehoboth police officers congenially standing guard at Sundance dances and auctions at the Convention Center, at the CAMP Rehoboth block parties, and being responsive to every single call or communication from CAMP Rehoboth?

Following CAMP Rehoboth leadership, we all played a role in bridging the cultural gap between the LGBTQ community and the police here in Rehoboth. And the straight community. And the other non-profits. And the business community. The list goes on.

I certainly cannot forget the police officers in full uniform, the police department flag at half mast, and officers openly grieving at the 2018 memorial service for the late CAMP Rehoboth Executive Director Steve Elkins.

Heaven help us if we echo the misguided decision by the New York Pride organization to break the terrific bonds we have nurtured with our local law enforcement.
And if you see some of Rehoboth’s finest along your way downtown, thank them and wish them well for me. ▼