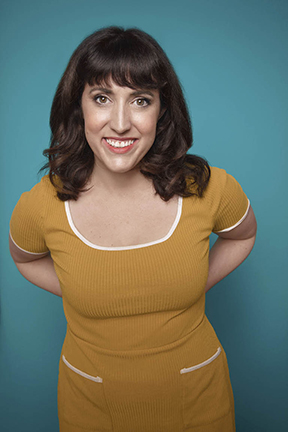 In a basement classroom my freshman year of college, I heard a woman with purple hair say, “I came out to my parents as queer when I was 13. And I came out to them as kinky last year.”

I had so many questions.

Should any mother have to hear that her daughter wants to be consensually beaten in a hot way? Why would someone say “queer” instead of lesbian or bisexual—like, who did she want to get kinky with anyway? Would I, a basic bisexual from the suburbs, with no romantic experience with women outside of a multi-year infatuation with a straight girl I wrote tortured poetry about, ever be able to fit in with the other women at this Queer Women’s Mixer? I decided, no, I would not.

It wasn’t cool to be bisexual in the conservative Christian suburb where I grew up, but it definitely wasn’t cool to be an uninformed square in a sundress too terrified to make eye contact with women I was attracted to either. “No one will ever take me seriously as a queer person if I don’t date some women or at least get a better haircut,” I thought. I went back to my freshman dorm and decided to join a sorority instead. After spending so many years in the closet, what were a few more?

Maybe it’s true—there’s a lid for every pot. A year later I was deeply in love with Molly, another lady from the same suburb. We both wore sundresses. It was a proverbial us-against-the-world romance, and I didn’t care who knew I loved her. Despite my insecurities about being too basic, too femme, and too bi, being in love with a woman allowed me to finally feel I had the right to claim queer identity.

“I’m bisexual,” I announced at a monthly sorority meeting. “I don’t care if anyone here has a problem with that!” My sorority sisters, in retrospect, looked surprisingly unperturbed. “Kate,” someone said to me, “no one minds that you’re bisexual. But we need you to stop using the house chores email list to invite people to Iraq War protests.”

There was no neutral on a moving train! I quit the sorority and I was ready to live as a full-time queer. I came out to my parents. I moved into a queer co-op and spent the weekends at dance parties and dumpster diving with people who, for the first time in my life, made me feel a sense of true community.

This community helped me throw the DIY wedding where I married Molly. Multiple former sorority sisters came out of the closet in the years following—it turned out that there’s something kind of gay about wanting to spend all of your time with attractive people of the same sex. As Molly and I built a life together, I stopped identifying as bi, and just identified as her wife.

When we broke up a few years later, I felt like I was losing not only my relationship, but my identity. I went on dates with a few women, but pretty quickly ended up in a rebound relationship with a guy that lasted four years. I was so worried my friends from the co-op would reject me if I lost my queer cred. They didn’t. It turned out they, to use a bisexual cliché, “were just into the person.”

I mostly date men now; I genuinely don’t know if that’s because I’m more attracted to them. The process of trying to figure out how to date guys after so many years of not doing it was so funny and so traumatic, I had to write a whole audiobook to parse through it.

Right now, I’m—say, a Kinsey 2. I guess if you really press me on it, I’m bisexual, or pansexual, and maybe even demisexual, because so much of sexual attraction for me, at this moment, requires emotional connection.

It’s changed a thousand times. I expect it to change again. Maybe when I’m 80 years old I will look back on the past 30 beautiful years I spent in a multi-gender polycule. I sometimes feel guilty, like I don’t have a right to claim queer identity if it’s been X number of days or years since I’ve done something gay. But who I’m with doesn’t erase my past, my politics, and the lifelong process of reckoning with, and ultimately failing at, hetero-expectations. ▼