While every month is Pride month here in Rehoboth, it’s perfect that the Letters cover for June (the official Pride Month) features a bevy of beauties well-known and much appreciated here in town.

From left on the cover, Julia Sugarbaker II, Mona Lotts, Magnolia Applebottom, and Roxy Overbrooke. Saturday nights at The Pines, Mona and Kristina Kelly present A Night of Divas with their friends, while they reappear on Sunday for the Drag Brunch. Kristina takes the lead on Show Tune Tuesdays, also upstairs at The Pines.

The girls are on stage several nights a week and for brunches around town. And you can often find them—and many more—in full regalia (or not) at other venues like Port 251, Goolies Drag Brunches, and who knows where else. If I’ve missed mentioning any of your shows or venues, mea culpa! You are all, ALL over!

There’s also great anticipation about the opening of Freddie’s Beach Bar in the spot vacated by The Pond. That establishment is sure to host drag performers and add to the roster of creative, talented, fabulous drag queens at the beach.

On July 4th Weekend, you best look out for a group of legendary Pie Ladies making scheduled stops in downtown Rehoboth, perhaps by Jolly Trolley, and for certain delivering yummy pies to selected households. If you’re lucky, you’ll run into them in time to catch the clever skits they devise. Lore has it that the skits are slightly more on script during the early part of their tour.

Curious about those gorgeous costumes and the high hair those gals show up in? It’s not unusual for our queens to have oodles and oodles of wigs. When Letters last inquired, Mona Lotts had lots and lots, topping out at close to 150. Magnolia cops to over 100. 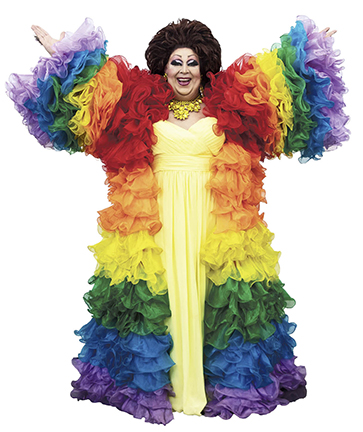 Thanks to RuPaul, drag queens are 100 percent mainstream these days and CAMP Rehoboth has had a long history with drag queens—Gladys Kravitz was the original spokesperson for the safe sex program, CAMPsafe, nearly 20 years ago—but it has never been easier for a queen to show some cleavage, for the girls to find their voice, or for a fan to find a show.

Steeped in tradition to go along with our history, the art of drag is alive and well in Rehoboth and environs. These performers are professional, hilarious, and wickedly witty. They sing, sync, and sashay to the glee of thousands of audience members each summer season.

So hustle around Rehoboth Beach and enjoy what these girls have to offer. ▼