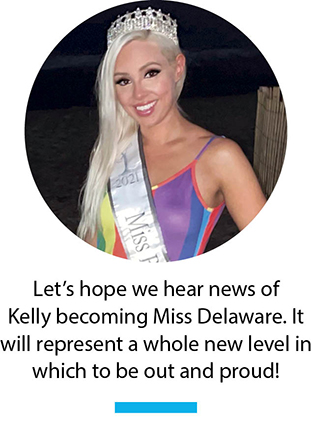 Should you see Kelly Smith walking down Rehoboth Avenue, you would admire her confident gait, her attractive face, and the determination in her eyes. Kelly Smith is Miss Rehoboth Beach, and she will be competing in the pageant for Miss Delaware on June 27. She hails from northern New Jersey, having more recently come to Rehoboth to represent the town as an out, proud queer.

There has only been one state pageant winner who identified as LGBTQ. She was Miss Utah, Rachel Slawson, in 2020. Kelly Smith would then be the second to claim the crown while representing equality, regardless of sexual orientation or gender identity. According to Smith, “it’s important to show everyone that LGBTQ persons can be a part of these pageants.”

Having come out as queer at the age of 13, the ensuing few years brought a gradual progression of back-and-forth from the closet. As a self-identified bisexual, Kelly feels she has faced discrimination by both straights and gays. As a result of those experiences, she has taken an activist stance in addressing such incidents of prejudice. Kelly has begun multiple LGBTQ chapters for domestic violence groups. She also hosts a virtual support group for LGBTQ victims.

Wishing Kelly Smith the best in the upcoming Miss Delaware pageant, we also are grateful for her advocacy and action in being a resource to many others needing it. Let’s hope we hear news of Kelly becoming Miss Delaware. It will represent a whole new level in which to be out and proud!

Trans-Forming a Better World
Among his remarks on June 1, President Joe Biden shared this about Pride Month: “Members of the LGBTQ+ community now serve in nearly every level of public office—in city halls and State capitals [Senator Sarah McBride], Governors’ mansions and the halls of the Congress, and throughout my Administration.... I am particularly honored by the service of Transportation Secretary Pete Buttigieg, the first openly LGBTQ+ person to serve in the Cabinet, and Assistant Health Secretary Dr. Rachel Levine, the first openly transgender person to be confirmed by the Senate.

“For all of our progress, there are many states in which LGBTQ+ individuals still lack protection for fundamental rights and dignity.... Our Nation continues to witness a tragic spike in violence against transgender women of color.... Some states have chosen to actively target transgender youth through discriminatory bills that defy our Nation’s values of inclusivity and freedom for all.”

Two of the key challenges to equality are those of violence against trans women of color and the outrageous laws being passed prohibiting trans girls from competing in women’s sports.

Thus far in 2021, 31 transgender persons have been killed by violence. Twenty-five were trans women of color. It is an unfortunate reality that many of them were involved in sex work in the cities where they lived. This reflects the circumstances these women face in attempting to find their place in this world. Having been rejected by their families, most face homelessness and certain job instability, becoming sex workers in places where life itself is uncertain.

There was another Black transgender woman who recently died at the age of 37. Her cause of death has not at this point been labeled as homicide. Nona Moselle Conner survived a stabbing incident in 2016, where she was stabbed 48 times. Then she died suddenly on May 13 of this year.

David Mariner, Executive Director of CAMP Rehoboth and formerly of the DC Center for the LGBT Community, knew Nona personally. He shares that “Nona worked for Collective Action for Safe Spaces and No Justice No Pride, where she drew on her personal experiences with assault and violence to be a powerful advocate for the trans community. Unless you experienced the things that Nona did, it’s really impossible to understand the impact that level of trauma can have on your life. Nevertheless, she always had a word of encouragement for others, and was helping them even in the midst of her own struggles with employment and housing.”

On June 1, the start of Pride Month, Florida Governor Ron DeSantis signed a bill prohibiting transgender girls from competing in women’s sports in high school and college. Thus, Florida joined the growing number of states across this country having passed similar legislation. This debate is heated, and definitive lines have been drawn between those who support it and those who oppose it.

The causes for discrimination against the LGBTQ community seem to grow unabated. We now have a president who will defend them, but bigotry has reared its ugly head in so many venues. We need to unite our voices and our actions to transform into a better world. Only then can we know that the rejected and marginalized of our world will survive. ▼