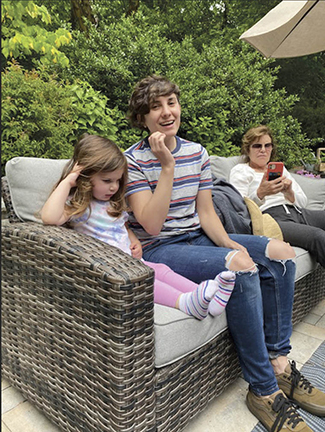 By Any Other Name

I grew up with an intuitive sense that there was more to my gender than “girl.” I was given the name Tyler at birth, and it felt right that I always met boys named Tyler.

When I was anorexic in high school, a family member interpreted it as starving away my hips and breasts because of reticence to grow up. They were right about one thing, but around 2002 or 2003, neither they nor I had a word for non-binary. Even today, I’m still processing the ideas I’d learned about masculinity and a certain type of white, able-bodied thinness. But back then, there wasn’t much public conversation about trans people at all—let alone genders outside the binary.

Things got even murkier because of my slow process of self-awareness. Up until getting sober in my late 20s, most of my actions were intuitive and difficult to verbalize. This didn’t help when people asked how I “decided” I was non-binary.

I didn’t decide. I didn’t not decide. I tried different ways of being in the world. I changed as the vocabulary available expanded what was possible. You can’t fully know something about yourself if you don’t have a concept of it—which starts with language.

I don’t know when I first used the word “non-binary.” I know that at Pride 2008 I wrote the words “soft PERSON” in marker on my arm; I was frustrated with what felt like too much pressure to label my presentation (“soft butch,” “hard femme,” “lipstick lesbian,” etc.) in the lesbian dating scene. I was in my early 20s and thought I was being subversive. I don’t have a problem with the existence of the labels now, but I intuited that there wasn’t space for me in those words.

A couple of years before that Pride, I’d had my first concrete thoughts that my gender might be complex. In 2006, when I was a sophomore in college, polycystic ovarian syndrome (PCOS) and high testosterone levels started causing facial hair. My response to the spironolactone prescription I was given to offset the effects of testosterone—to not take it—was informative.

I once heard another non-binary person with PCOS say we shouldn’t discount the syndrome as a valid “reason” to be trans. I don’t think we need a reason, but I don’t know what would have happened if I hadn’t had it. It made a non-verbal inkling a concrete thing I could point to. Yes, at first as “proof” for others—but also to help me understand myself.

I learned about my gender by trying different presentations. It started back in 2006 with sports bras—first one, then one on top of another. It wasn’t until 2013 that I realized binders aren’t only for trans guys. There was a brief period where I thought I was a trans guy. But imagining myself as a dude felt just as stifling as the ideas of womanhood with which I’d grown up or the lesbian labels.

For me, growing into my gender has meant first pushing away the compulsory femininity I grew up with, then trying to become more masculine than I am, and finally embracing that I am neither and both. As someone with a history of addiction who always wants more of everything, I’ve had to work through fears that this was just another excess. I’m a bit of every gender—I want it all for myself—and I’ve learned to love this quality.

Some people might think this is just labeling—creating more boxes that normalize new gender norms. But in my own life, as conversations around gender have become more nuanced, it’s created space for me to be who I am. Language allows the material possibility of knowing, where otherwise our intuitions might become ghosts. ▼

Tyler Mendelsohn is a Baltimore-based writer who works in addiction recovery, a frequent visitor to Rehoboth, and loves books, music, friends, and cat-friends.