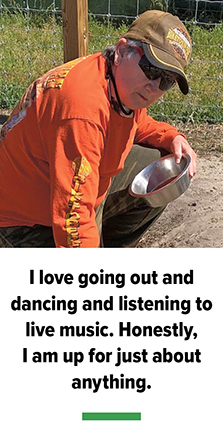 Maybe You Can Go Home Again

Page’s earliest years were spent in Newark, Delaware. Then, in the sixth grade she moved to Smyrna, Tennessee, where she lived until she moved to Rehoboth Beach on New Year’s Day in 2019. For the last 50 years, however, she vacationed at her grandparent’s home in Lewes.

Page has noticed a lot of changes over the years. She says there are a lot more cars, houses, and people in the Rehoboth area. She also notes that “the fish are nowhere near as BIG they used to be 50 years ago.” But she says there have been many positive changes as well, including the fact that the Rehoboth area has become much more friendly towards the LGBTQ community.

Page also volunteered in Nashville by helping during the winter months at a homeless shelter for youth, where she says 40 percent identified as being LGBTQ. She served as a CASA (Court Appointed Special Advocate) volunteer as well. CASA workers are community volunteers who stand up and speak out to help abused and neglected children. Page volunteered at Tennessee’s Pride Fest to recruit other CASA workers to volunteer with youth in the court system.

Page received her bachelor’s degree in biology from Middle Tennessee State University. Her interest was pre-vet. While in college she worked as a pet groomer and loved it so much that she became a professional groomer. Page works full-time at the Millsboro and Milton locations of A Comfy Pet Grooming Salon, and says she absolutely loves her job.

What is your favorite CAMP Rehoboth event?

I would have to say that my favorite is Women’s FEST. As a breast cancer survivor, I especially love the Broadwalk on the Boardwalk and attended the virtual Broadwalk this year. I feel that it is empowering and feels amazing to walk with so many survivors and those who support us. At Women’s FEST I also love the comedians (comedy shows) and the women’s dances. I love to dance, and the Women’s FEST Welcome Thursday night dance is always a blast and I always have such a great time. I look forward to it coming back into full swing next year.

What volunteering have you done at CAMP Rehoboth?

I am a new volunteer to CAMP Rehoboth. I volunteered in April 2021 at the Southern Delaware Therapeutic Riding CROP event. I was given the task of painting the muck stalls. I had a blast and got to meet some cool people.

My mother was, and still is, my biggest mentor. She got me involved in Girl Scouts which afforded me the opportunity to learn a variety of skills as well as the confidence to do those skills. She taught me how to be very independent, and I think she is an amazing mother.

What keeps you busy?

Well, I love my job grooming cats, dogs, and all animals. I joined the Rehoboth Beach Women’s Senior Softball League. This is my second summer playing with that league. I also bowl on the women’s bowling league and I am on the Varsity Gay Bowling League, and this is my second-year bowling with them. I love going out dancing and listening to live music. Honestly, I am up for just about anything.

What is your fondest memory of your time in Rehoboth?

One of my fondest memories was going to the women’s bar in Dewey Beach. That bar is no longer there, and we (women) really don’t have a place like that anymore. ▼