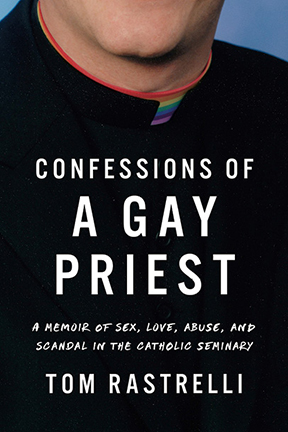 Confessions of a Gay Priest by Tom Rastrelli

You spent days examining your life.

Sins: that's what you were looking for. How had you displeased God? How many lies, covets, dishonors? What have you done since—oh, when was your last confession, anyhow? They say the sacrament is good for your soul, and in Confessions of a Gay Priest by Tom Rastrelli, there's a lot to tell.

Though he'd always known that he liked boys, little Tommy Rastrelli pretended the opposite when he was in grade school because marriage was what good Catholics did. His family was devout and Rastrelli never questioned God's love. Not even after, he says, he was repeatedly molested by a doctor in his Iowa hometown.

For several reasons, he never told his parents about the abuse, enduring it for years until he'd convinced them that he was too old for a pediatrician. That God hadn't saved him from a predator made Rastrelli slowly lose his faith and his self-respect. He stopped attending Mass and began questioning the Church's teachings.

But then God called a shocked Tom Rastrelli to the priesthood.

It happened while he was at college, and the whole idea quickly consumed him. Gone was the plan to major in theatre; instead, Rastrelli began to explore a world steeped in mystery and ritual, but overlaid with fear. Always believing that testimony against the doctor could save others from the same abuse, Rastrelli took legal action, knowing that scandal could ruin his chance to attend seminary.

There were many things undiscussable, in fact, and the court case was only half of it. As he progressed in his journey to ordination, the secrets included priestly kisses, caresses, and soft lies that a "backrub" was just a backrub. At nearly every gathering, Rastrelli was approached for sex or touched inappropriately, led to believe that celibacy had wiggle-room, plied with alcohol or favors, and left to deal with it alone.

He fell in misguided love.

And then he fell into a deep depression, with only one real way out....

The Confessions of a Gay Priest is a hard, hard book to read—it'll make you squirm, it'll make your eyebrows raise, you'll want to toss it on the street and let semis run it over, and yet, it's stay-up-all-night compelling.

Beginning with his ordination (so you know-don't-know the end of the story), author Tom Rastrelli tells a tale that will further shock Catholics already reeling from church-related scandals. This book, however, is not written in the same manner as is a diocesan document: Rastrelli is sometimes extremely graphic, both in the bedroom and in his various emotional states. He doesn't pull back the curtains on his experiences, he rips them down and burns them. He used pseudonyms, but tells details before softening his harshness with beautiful language, strong faith, and poetic distractions that play with a reader's sympathy.

You can't beat a book like that, though its graphic nature needs to again be underscored. For a reader who can endure a panoply of squirms, Confessions of a Gay Priest is worth deep examination.