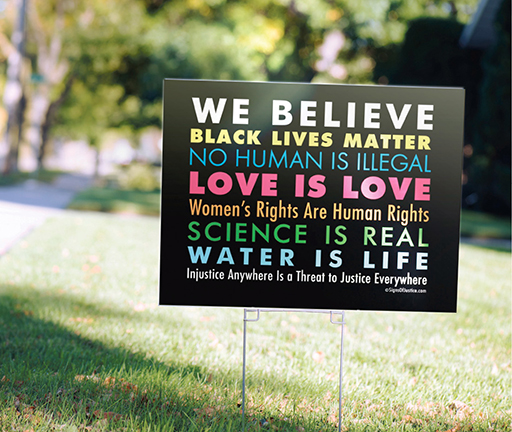 Signs of the Times

On display in a Rehoboth Beach front yard, this sign reads, “We Believe: Black Lives Matter; No Human is Illegal; Love is Love; Women’s Rights are Human Rights; Science is Real; Water is Life; Injustice Anywhere is a Threat to Justice Everywhere.” Quite a bit of territory is covered with one sign.

At this time of protests, many signs are found in cities across our country. “Black Lives Matter” and “I Can’t Breathe” are among the more popular ones. Naomi Osborne, great-niece of local businesswoman Gwen Osborne, a fourth-grade student in Columbia, Maryland, crafted her own sign reading, “All Lives Can’t Matter Until Black Lives Do.” Her sign includes a picture of George Floyd with the tagline, “#Justice for Floyd.”

Signs of protest amplify and magnify voices of protest. They are an extension of voices being lifted in all 50 states. One sign in Washington, DC lists the names of 16 black citizens who have been unjustly killed over the last few years. In Oxford, England, a challenging sign reads, “If you are not Anti-Racist, you are Complicit!” A sign in Sydney, Australia, reads, “We’re NOT trying to start a Race War, we are trying to END one!” These are signs of the times, reaching across the globe.

We must pay attention to other less literal signs of the times: the events and political nuances of actions taken by our leaders. In what shape do we find ourselves today? There is such political unrest at the moment that changes will have to be made. Will real police reform happen? Will the winds of discontent sweep our nation, resulting in fewer deaths at the hands of those whose motto is “Protect and Serve?” Dare we demand that NO deaths take place in the performance of their enforcement of the law?

Over the past five or 10 years, there have been attempts by some in the LGBTQ community to reach out to the African-American community, attempting to co-opt their energies and participation in the common pursuit of equality. In many ways, the struggles of both groups to achieve an equal platform in our country overlap. It makes sense to double the efforts of both groups in joint work toward a common purpose. Both are, in many ways, oppressed factions in our nation. Would it not make sense to join hands and minds in common goals toward equality?

While this may sound like a worthwhile effort, there are many in the black community who reject the LGBTQ overtures toward unified work to benefit both. But the answer is not to insist that each group go its own way, never to be heard from again. Each group’s desire and longing for equality feeds into that of the other. In fact, one cannot so easily separate the two groups into separate packages or demographics.

November 20 each year is the International Transgender Day of Remembrance. It is a somber time of honoring those transgender people around the world who have been killed simply for being transgender. In the United States, there are typically between 20 and 30 people killed each year. Most of those are women of color. It is a lamentable reality that many of these transgender women of color are in the sex business. Their sexual orientation and racial identity converge to put them in harm’s way, and they suffer the consequences with their lives. This sad fact explains why there was a sign in the recent Rehoboth Beach protest that read, “Black Trans Lives Matter.”

In his 2017 song, “Sign of the Times,” Harry Styles composed lyrics that seem to be eerily prophetic. “Just stop your crying, it’s a sign of the times. Welcome to the final show, hope you’re wearing your best clothes…. We never learn, we’ve been here before. Why are we always stuck and running from the bullets, the bullets?”

As we are all aware, most Pride Fests across the country are muted this year. The coronavirus still threatens us, and we cannot gather to celebrate the diversity of our communities the way we have in other years. Wear your masks, keep social distance, and envision a world where we are no longer defined by our color, our sexual orientation, or our gender identity. Do you see the signs?

David Garrett is a straight advocate for equality and inclusion. He is also the proud father of an adult trans daughter. Email David Garrrett at dlgarrett4rb@gmail.com